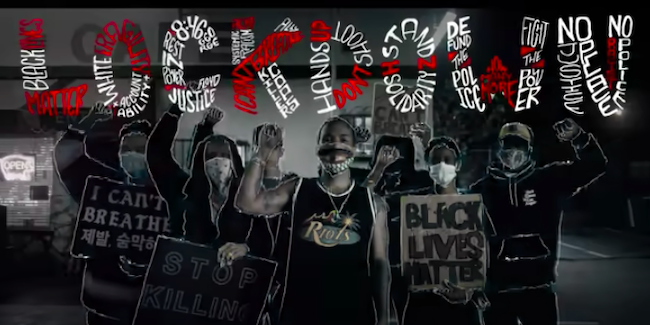 Any period of time spent in solitary confinement (sorry, quarantine) can yield creativity. By May 2020, the blog platform Pinterest gained 32 million users in one quarter. Online craft platform Stitch & Story had sales surge 800 percent in a one-year comparison from 2019 to March 2020. Home improvement projects are now left in the garage uncompleted as workers slowly creep back to the office. Maybe completed projects are shown off on Facebook or during Zoom book club meetings. But where does this leave the music industry?

It is important for all people—regardless of faith—to have something like new music releases to look forward to. Music boosts our dopamine and serotonin levels, and those mood-boosting chemicals are needed now more than ever. Listening to music consciously or having music in the background of our lives can boost productivity, as well. Everyone can benefit from a little music in their lives while in quarantine.

Artists in the past 10 months released ‘quarantine tunes,’ like Better Days by OneRepublic or Lockdown by Anderson .Paak. However, many artists planned on touring this year.

The cancellations of essentially all concerts and festivals made musicians become very creative. DJ D-Nice and Questlove launched Instagram Live dance parties. Members of the Boston Pops Orchestra and composer John Williams collaborated remotely from their homes to create a tribute to healthcare workers. Travis Scott performed a concert inside the video game Fortnite. Live streaming became a popular phenomenon because of Facebook and its entities like Instagram. Now artists are trying to enhance their social media presence because that is quite frankly the only way to communicate with their fans.

Another video service is Tik Tok, which has received much controversy lately. The popularity of this application has placed songs released years ago to the charts. One such song is Fleetwood Mac’s “Dreams“, which was on Billboard’s Hot 100 chart.

This song became popular due to a Tik Tok video of a user riding a skateboard down a hill drinking cranberry juice. When he lip-synced the legendary song while riding, the comments flooded with positivity. During trying times, videos such as these have risen to popularity. The background songs of these videos influence Billboard charts. Spotify has a playlist with more than one million likes containing viral Tik Tok songs.

In a virtually remote world, music helps to bring us together. Creating music is a catharsis for artists and musicians who wish to share their thoughts with others. Spreading music during this time has become a business within itself. The uncertainty of live music in the future only prompts artists to have an established online presence. Why should we care about the direction of the music industry? In a post-COVID era, these practices may stay the same to prevent the spread of a different virus. And because of apps like Tik Tok, you will discover music previously unknown because of the lack of accessibility. Maybe increased access to music in these ways will be one of the good things to come out of these trifling times.

Previous Matt Shea Isn’t Running, But He’s a Key Part of Election Attack Ads
Next 2020 is a Bad Year, and The Blame is on Us