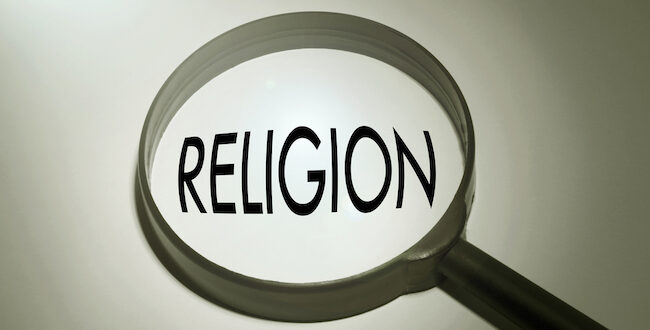 Magnifying glass with the word religion/DepositPhoto

The Decline in Belief

The Decline in Belief

So, Americans’ belief in God is at an all-time low, at least according to a recent Gallup poll.

The poll conducted last May and released in June gained some local currency this last week with a FāVS column by Scott McIntyre.

The poll found that 81% of Americans believe in God, by far the lowest since Gallup first asked the question in 1944 when 98% of respondents said they had such a belief.

McIntyre offers his own analysis to explain the reasons for the drop, written from a Christian believer’s perspective. There are others out there doing the same, too numerous to mention. I have my own perspective and, of course, it comes from a different place.

As Gallup reports, young Americans are among the greatest doubters, along with liberals and Democrats, which adds some context to the political divide tearing at the nation’s fabric.

According to Gallup, the groups least likely to believe in God include “liberals (62%), young adults (68%) and Democrats (72%). Belief in God is highest among political conservatives (94%) and Republicans (92%), reflecting that religiosity is a major determinant of political divisions in the U.S.”

The findings, particularly in relation to young people, reflect my experiences as a professor at the University of Idaho.

In teaching media ethics, I asked students to submit a short essay talking about a time in their experience when they reconsidered an important aspect of their lives and changed positions, the point being our personal values are not forever fixed. The essays were for my eyes only and never shared.

The two most common responses involved political beliefs, students moving from conservative to liberal, and religious beliefs, moving from believer to skeptic. This in one of the nation’s most conservative, most religious states.

I think much of the decline in belief is due to the precipitous decline in trust of all institutions. If we do not trust in government, or business, or media, or even the organized church, then why should we trust there is a God?

If you have been involved in, say, the Catholic church, you might well ask how a loving Catholic God could allow systemic sexual abuse of children. If you have been a Baptist, you can now ask the same question. Same for LDS.

Gallup tells us belief in God is declining. But numerous polls show church-going behavior is dropping much more rapidly. Will the latter increase the pace of the former?

My readers know I have never believed.

I am Jewish, as Jewish as Jewish can be…except I do not believe in God.

My Jewishness is cultural, the result of growing up in a Jewish household. Both my parents believed in a higher power, though they did not always describe it in Biblical terms.

Dad had been raised to be Jewish in the religious sense. He had his bar mitzvah at 13, went to Hebrew school and attended synagogue.

Mom was raised in a mixed house. Her father, Sam Sommers, had been raised Jewish. But her mother was born Christian. Both Christian and Jewish holidays were observed in Mom’s home, at least in terms of ritual – she grew up with Christmas trees, for example.

Dad’s religious beliefs were more deeply rooted in the Old Testament and the God of Moses. I do not think he ever thought of God as a bearded old man in the sky. But he did believe there is a higher power that people can access in some ways. He had some spooky ESP abilities that he attributed to that universal force.

Mother was more pragmatic. But she had her own unexplainable experiences and so also had that belief.

I think most everyone wants to believe. I have tried to believe. I read all the major religious works and took courses on religion in college. But belief did not come.

For most of my life, that has made me an outlier, even in my own family.

My dear wife Carla, a lapsed Catholic, still believes and worries for my soul. At a memorial service for a dear loved one last week, she crossed herself, said her prayers, and told me afterward she still believes in some form of later existence. I love her dearly, would love to spend eternity with her. But I do not believe.

What the Gallup poll tells me is that I am less an outlier in this country than ever before. In my liberal political circles, nearly 40% of my fellow progressives apparently share my atheism.

I am far less alone than I thought possible, ever expected.

In our society, overwhelmed by and literally drenched in religion, it takes some work to move to unbelief. Atheism is a rational decision, a thoughtful decision as it most often develops in the face of pressures from family and community.

What happens when a nation is populated by an increasing number of non-believers?

The religious right, made up of those who would impose their beliefs on me and other like-minded Americans, will say we are responsible for some sort of moral rot that leads to abortion, gay marriage, pornography, crime, and drug addiction. Believe as they believe, the argument goes, and we will be a godly nation, a more moral nation.

But that position assumes non-believers cannot live a moral life.

In my view, a more godly nation has the potential to be a less tolerant nation, an exclusionary nation, a nation in which those who do not conform are sent to the sidelines, or worse.

What happens to a nation where the number of non-believers grows?

I believe we will be better for it. If the trend noted by Gallup continues, we will find out.