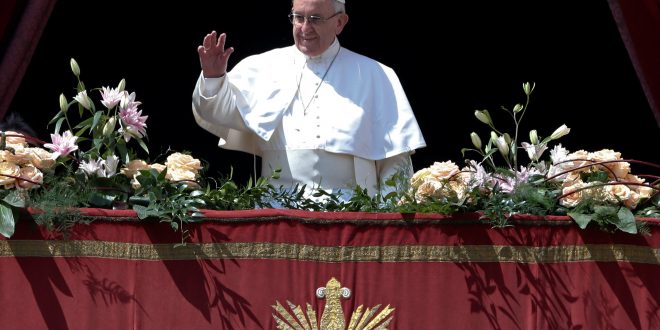 Pope Francis waves before delivering his "Urbi et Orbi" (to the city and the world) message from the balcony overlooking St. Peter's Square at the Vatican April 16, 2017. REUTERS/Stefano Rellandini

The debate that shouldn’t be happening

As a Catholic Christian who has experienced the pain of divorce I follow – with more-than-occasional annoyance – the ongoing debate that surrounds Pope Francis’ recent pronouncements on marriage, coupled with the response from so-called conservative lay and ordained commenters.

The Los Angeles Times recently ran a story saying that a formal schism may be brewing within the Catholic Church because of what are perceived as Francis’ divisive statements on a host of topics, most recently the language he used in his papal statement known as Amoris Laetitia, which appeared to offer some wiggle room for Catholics who were divorced, then remarried in civil ceremonies, and who want to receive the Eucharist even though church law strictly forbids it.

In February I marked the 10th anniversary of my divorce. Not long after I got it I told a priest/friend that I hoped to remarry someday. He offered an unnerving, unwanted, annoying one-word response: “Perhaps.” Ten years later I’m beginning to think he was correct.

I tried online dating, but I have had enough of meaningless profiles and one-and-done dates with women who were simply not conversant with their faith. I’m comfortable with the awareness that marriage probably won’t happen because I have tried, and still do, to surrender that desire to Jesus and let him decide what becomes of it. “Not my will but yours be done.”

Surrender is the one word I haven’t read during the stream of seemingly never-ending articles about Francis. One side talks about compassion and cutting people some slack, while the other side talks about obeying the rules that the church has spent 2,000 years discerning, writing and defending.

Neither side in this absurd debate wants God to get involved in it. Each side talks to itself, not the other side, because neither side is listening. And because each side can justify its position theologically and philosophically there is no perceived reason to listen to the other side because both sides think they already know God’s will.

The debate has thus become something that neither side wants and neither side will confess: An avenue by which we wind up farther away from God than when we first began.

By trying to defend their view of the faith, both sides are actually killing the faith, not only for themselves but also for all those who, like me, can only read their words and weep.

Previous Leadership prayer breakfast to be held May 4
Next POEM: Peace