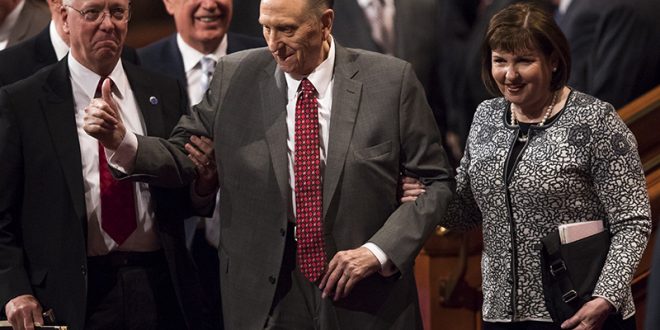 The Death of a Prophet: Thomas S. Monson

“In reality, we are all travelers – even explorers of mortality.”

Jan. 2, marked the end of an era for members of The Church of Jesus Christ of Latter-day Saints. The president of our church, Thomas S. Monson, the man millions of Mormons consider to be a prophet of God, passed away due to health issues incidental to his age. I remember distinctly the pang in my heart as I heard the news of his passing early Wednesday morning. My drive to work was somber as I reflected on his life. We all knew his health was failing. It was only a matter of time before he left this mortal experience to move on to his next great adventure. For over half of my life within the church – I converted in 2001 – Thomas S. Monson has served as the prophet. Ten years in fact, from 2008, until his death this last Tuesday. I felt a strong sense of connection to the man I had called prophet for so long, which made the news of his passing that much harder.

President Monson’s tenure as president of our church was marked by rapid growth in membership. His tenure was also marked by an increase in the missionary force, which jumped from nearly 53,000 missionaries serving around the globe, to 80,000. More importantly his service was marked by his lifelong examples of service, and his clarion call to serve like the Savior.

It may be strange for people outside of our faith to see us mourn a man we didn’t personally know. However, after listening and pondering to his inspired words and the stories about his life for more than 16 years, I truly felt like I knew him. When he expressed his love and appreciation for the members of the church, I felt the sincerity of his words. I distinctly remember the revelation that a prophet of God existed in today’s world as one of the first things I gained a testimony of during my faith journey.

We are now at a time when a new prophet will be called. Generally this person will be the senior most member of the Quorum of the Twelve Apostles. In this case, the senior most Apostle is Russell M. Nelson, a retired cardiothoracic surgeon. And with his calling millions of members around the world will have an opportunity to receive deeply personal revelation that he has been called of God. A strange concept to those outside of our faith, but within the Church, the fact that a prophet of God exists is fundamental to our doctrine. And the fact that we are all called to receive revelation and sustain him in his calling is just as fundamental.

In the long run, though I mourn the loss of a spiritual giant like Thomas S. Monson, I am grateful for the inspiration his words had upon me, urging me to be better, serve like the Savior did, and properly align my will with God.