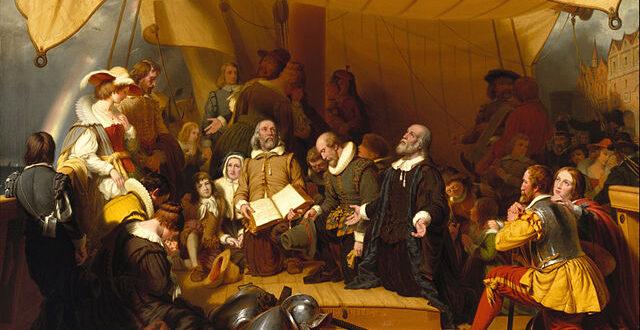 The Embarkation of the Pilgrims (1857) by American painter Robert Walter Weir at the United States Capitol in Washington, DC

Thanksgiving is a chance for my family to come together as survivors, pretty much in defiance.

Jacqueline Keeler of the Dineh Nation

The Pilgrims disembarked on the land of the Wampanoag Nation 400 years ago. They called themselves the People of the First Light, but that light was dramatically dimmed, when, in 1616, European traders brought a yet unidentified disease and about 45,000 perished. Ironically, the Pilgrims settled in an American Indian village, which, along with its agricultural fields, was deserted because of the epidemic.

Of the 69 tribes of the Wampanoag, the near-by Pahtuksut tribe, out of fear of disease, waited five months before they visited the newcomers. According to eyewitness accounts, 90 native men joined with 60 Pilgrims in the harvest feast that is now called Thanksgiving. It was not a national holiday until Abraham Lincoln made an official declaration in 1863.

In 1621 the Wampanoag Chief Massasoit signed a peace treaty with the newcomers. Even though National Geographic’s Bill Newcott describes the intervening years as “stained by treachery, bloodshed, and betrayal,” a tenuous peace lasted until King Philip’s War (1675-76). Hundreds of settlers and thousands of Native Americans perished in this conflict, and many native survivors were either sold into slavery or indentured servitude.

Hazel Currence, a Wampanoag descendant living on Cape Cod, expresses her sorrow, “We were exposed to disease. We were exposed to slavery.” She respects the Pilgrims’ right to flee religious persecution, but they came and “wiped out the existence of a whole culture.” A sad irony is that celebrations of the more inclusive “Plymouth 400” have been cut back because of the coronavirus pandemic, which has severely impacted, primarily because of poor health care, all Native Americans.

At the 150th anniversary celebration of the Plymouth landing, a Wampanoag chief was denied the right to speak about his tribe’s grievances, but this year’s event will include them. The organizers are committed to “telling the historically accurate and culturally inclusive history, encompassing the federally recognized tribes of the Aquinnah and Mashpee,” the only ones left of the original 69 Wampanoag tribes.

In 2015 former President Barack Obama signed an executive order placing in trust a 321-acre piece of Mashpee land on Cape Cod. This would allow the tribe sovereign autonomy and have its own police force, health services, and laws. In 2020 Obama’s order was rescinded by a Boston appeals court, which ruled that Obama did not have the authority to do this.

In 2019, Trump’s Interior Department revoked the Mashpee’s reservation rights. Tribal Chairman Cedric Cromwell reported that he thought that the Trump administration was calling to offer more help with the coronavirus, but he was blindsided by this decision, which he felt was “cruel, unnecessary, and a punch in the nose from a bully.”

Massachusetts Rep. Bill Keating called the action “one of the most cruel and nonsensical acts I have seen since coming to Congress.” Keating introduced the Mashpee Wampanoag Tribe Reservation Reaffirmation Act, which passed the House but was stalled in the Senate. Calling it a “special interest casino bill,” Trump criticized senators for supporting it, with a side attack on Sen. Elizabeth Warren as a traitorous “Pocahontas.”

At stake is the Mashpee’s plan for a casino on tribal land, one which would compete with the Twin River Casino just across the border in Rhode Island. The casino’s president is George Papanier, who was once chief finance officer of one of Trump’s bankrupt casinos in Atlantic City. Twin River’s lobbyist is Matt Schlapp, chairman of the Conservative Political Action Committee, whose wife Mercedes Schlapp is Trump’s strategic communications director.

Trump has always been at war with American Indian casinos, and at a 1993 House hearing he declared that tribal owners “don’t look like Indians to me. I might have more Indian blood than a lot of these so-called Indians.”

Senators Warren and Ed Markey are determined to reverse the “disestablishment” of the Mashpee’s reservation. They contend that the “Mashpees have a right to their ancestral homeland no matter what craven political games the Trump administration tries to play.”

Previous This Thanksgiving Season, Immigrant Family Gets New Home in Spokane
Next Ask A Catholic: Spirits of the Dead?