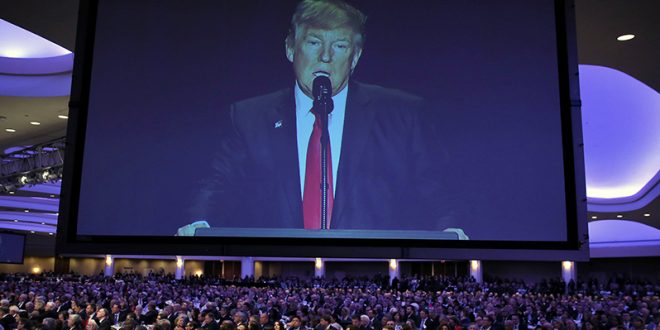 U.S. President Donald Trump is seen on a screen as he delivers remarks at the National Prayer Breakfast in Washington, D.C., on Feb. 2, 2017. Photo courtesy of Retuers/Carlos Barria

The Crude Colossus — a satiric poem, with apologies to Emma Lazarus

Much like a brazen giant prone to screed,
With gesticulating limbs at every speech;
He doth permit few immigrants to breach
Our shores. A cranky man, whose Twitter feed
Exemplifies vulgarity and greed. His name
Father of Insults. One we should impeach,
Who exudes arrogance, whom you can’t teach;
And adoration is his biggest need.
“Keep, shithole states, your denizens!” cries he
With puckered lips. “Give me your wealthy, white,
Your Nordic masses, each with Ph.D.,
The high-tech experts coding through the night.
Send these, the gifted, privileged to me,
To others I spew only wretched spite!”

Previous More than 3,000 take to Spokane streets for MLK Day
Next Spokane churches help families get out of debt