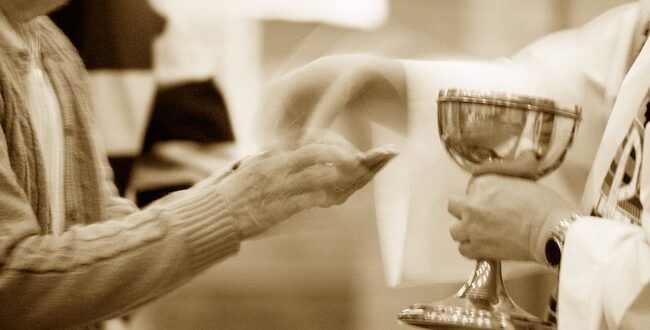 A woman takes communion at church/DepositPhoto

“For all who eat and drink without discerning the body, eat and drink judgment against themselves. For this reason many of you are weak and ill and some have died.  But if we judged ourselves we would not be judged…”

While the risks of a pandemic seem slight, the coronavirus seems like a hot political potato that makes old Dan Quayle’s misspelling of ‘POTATOE’ rather obsolete.  The way the news lands upon Christianity’s celebration of worship, however, will undoubtably hinge upon the protocols employed with the Bread and the Cup.

Contrary to popular belief, the truth claims of Jesus of Nazareth and the Apostle Paul cannot easily be set aside as esoteric and cerebral; the body is involved in the faith.  And as that body proves susceptible to communicable disease, the health of one’s doctrine may sometimes collide with the practice of prudent hygiene.

What to do in church?

And so I stood, as of March 1 before a congregation, accustomed to the Passing of the Peace, and felt obligated to inform them about the dangers of shaking hands and offering hugs of condolence (due to Coronavid 19).  What exactly is the faithful thing to do?  Do we text one another amid the pews?  Do we nod and gesture from an appropriate distance?  Exactly how much of the Gospel proclamation is verbal, and conveyed via the breathed out verbiage, and how much finds its transmission via body-language that doesn’t invade one’s private space?

The awkwardness of the instruction was later compounded with the invitation to Communion, a.k.a., the Eucharist, a.k.a., the Lord’s Supper—during which believing followers of Jesus recall the Passover Celebration of the Jews, and simultaneously look forward to the Eschatological Banquet at the End of the Age.  Whether participants come forward and partake by intinction, or by the retrieval of little shot-glass cups of Welch’s grape juice and dice-size morsels of a carbohydrate-to-be-named-later, germs are germs are germs.  And yes, in fact, the possibility of transmitting some kind of infectious malaprop may correspond to the height of Jesus’ ascension into heaven.  That is to say—we are talking about the clash of theology and bio-chemistry… or perhaps the conglomeration of a spiritual discernment in juxtaposition with that of a medical diagnostician.

What is it we say to someone who believes in the Incarnation of God as an enfleshed (albeit crucified) consciousness, and who therefore must honor the traditions which sanctify all mortal bodies, the minds of which, congeal their thoughts like so, around Saint Thomas Aquinas:, “The reality of the sacrament is the unity of the mystical body, without which there can be no salvation; for there is no entering into salvation outside the Church, just as in the time of the deluge there was none outside the Ark, which denotes the Church”?

The Disease We Fear

Maybe we say that it’s time to re-think the method by which the mystical body coheres with the face-to-face body of believers and seekers, who are not as homogenous (or hegemonic) as medieval theologians had compartmentalized.  Moreover, it could be that the DIS-EASE we fear the most is the encounter between one despairing, embodied soul—who worries about the effects of the coronavirus—and the person who genuinely believes he or she has been sent to authentically engage that despairing, embodied soul.

In the Shashuko Endo novel, “Silence,” Portuguese missionaries are sent to a recalcitrant Japan in the late 1500’s.  A priest has been given the choice between allowing the peasants to suffer horribly (until death) and committing apostasy, and renouncing the Christian faith in public.  It’s a terrible choice.  And yet, it’s a decision that echoes and resounds throughout the geographical region and the annals of history.  What is it that matters?  Really?  Is it the espousal of right belief?  Or, is it the passionate engagement of the Other?

Of course, I have my druthers about the legitimate and copasetic methods by which Christians deal with a health crisis.  Getting it, of course, is the faithful and the compassionate thing to do.  But, beyond getting it, we are driven into a wilderness of strangers, aliens, refugees… contaminated, quarantined, unclean… If the ultimate goal is to live in a germ-free environment—to the exclusion of the weak and the most vulnerable—I question the ultimacy of that goal.

Previous We’ve heard you outside Planned Parenthood. Now will you listen to me?
Next We can bring relevance, balance to social media