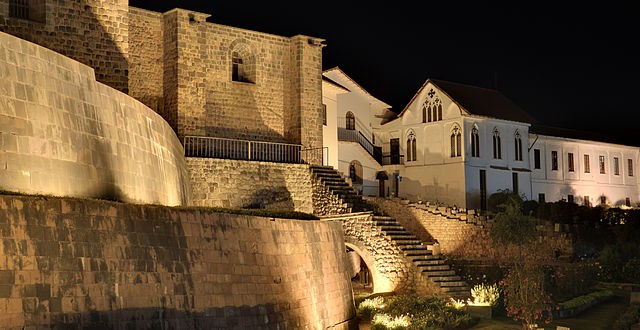 The “Conquest” and What We Can Do to Save the World

In the first part I described my journey through the Galapagos Islands, and the peaceable kingdom I found there. There was very little fear between the species. The force of evolution, some might say, of God, had been left to develop without our exploitative ways so that genetically the wildlife and its growth had taken place in an environment in which the species did not have to adapt to sudden, senseless and unjust, unnatural pain and death. Our exploitative ways, killing off whole species because they presented us with easy gathering, accumulation, and wealth were introduced very recently, and fortunately stopped before any species adapted fear and defensive reactions. Here was God, in a land in which we now observe Torah, God’s way, as best as we can discern it.

I then traveled from sea islands to Cusco in the high Andes, a distance of two miles in altitude. There the exploitation of the indigenous populations happened very rapidly, and has lasted for more than 400 years. Cusco was the capitol of the Inca empire and the capitol of South America. In the early 16th century Spain wanted to control it. Under the doctrine of the right of Christian Nations to own all non-Christians, body and soul, who were not represented by a country that had an organized government that fit European standards, a doctrine mandated by supersessionism and God having chosen Israel, now the church, as the chosen people, 157 Spanish soldiers marched in and declared the Inca subjects and possessions of the church. They faced an army raised by Inca of more than 10,000 men, but they faced muskets and cannon, something the Inca did not know how to fight. Inca was captured and his head wife publicly raped. He was released about a year later but was promptly assassinated. The Inca were so un-war-like they could not resist the duplicity of the Christian nation Spain, who invited all the major contenders for Inca leadership to an unarmed peace conference. The Inca showed up unarmed and were surrounded and killed by the “Conquistadores,” a misnomer for the oppressors.

The Inca did have a highly developed court system which mediated all disputes, usually to the satisfaction of everyone. The two major values of their culture were reciprocity and dignified work for the commonwealth. They did not bother with money or personal property, so gold and precocious metals were good only for decoration. There was no slavery, and human sacrifice was very limited, and practiced mostly by allied tribes for very high religious services. Blood sacrifice of animals was regulated, and usually combined with a banquet. Equality, work for the commonwealth, and dignity of the individual were key values and supported by their gods, mainly Pacha Mama, the earth god, and lesser natural forces. They had trouble with the ideas of Original sin, a supernatural exterior God, and substitutionary sacrifice leading to an unneeded salvation and resurrection. As more and more turned to the church rather than death by torture and fire, or beheading, they morphed the stories and dogma, and just didn’t talk about these doctrines. In the Cathedral of Cusco there is a beautiful painting that copies Leonardo da Vinci’s Last Supper that has a few more naturalistic flowers and animals on the border. But look closely. Instead of feeding the people with loaves and fish, the plate has on it a delicious looking roasted guinee pig. Most of the many paintings and icons were of Mary or Saints. The only leaders were angels or church fathers, admonishing or worshiping the Madonna. There were very few of Jesus as an adult, and those tended to portray the ascension. One of the passion on the cross had a Jesus in pigment that had turned very dark during an earthquake, the black Christ, miraculously signifying Pacha Mama.

The contrast between the European and Inca influences in the art shows the different views of divinity in the cultures, and displays the foundations of the European ability to see God as condoning the onerous exploitation and genocide of other humans and of nature.  The towns are built on the remains of Inca walls, huge stones finely interlocking and resisting earthquakes, with the tops of the old buildings, which were very resilient, having been removed to supply stone for cathedrals and Spanish homes. The lay-out was well engineered for traffic, irrigation, urban agriculture, and waste removal, far in advance to anything that Europeans were able to do. But the contrast is most amazing in the very accomplished high renaissance paintings by the Inca craftspeople. They were commissioned by the church to copy the themes of major European works and are about Mary, and the lives of the saints. The figures as in their European counterparts, are highly stylized yet very natural in pigment and musculature and dress. However, the Inca Artisans added very natural studies of flowers and animals, and occasionally people in natural settings, working, playing, or just being beautiful.  I counted only three emotions depicted on the faces of the major subjects: some anger, a concern that the subject recant or accept the dogma before being tortured and sent to heaven, or a very neutral beatific staring towards heaven focusing on a glorious but supernatural and removed from natural life God. I say tortured, because next door to the cathedral was the hall of the inquisition, where all apostate and heathens were tried, tested with coals and waterboarding, and condemned. Above the main door is a carving of a death head and cross.

The luxurious hotel we stayed in, was rebuilt from a major monastery of the Spaniards who built on the walls of the homes of Inca leaders, and was filled with beautiful high renaissance, 17th and 18th century copies of Spanish religious art. That was the first time ever my hotel bed was beneath a large picture of the ascending Mary, flanked by two angels. I slept soundly.  But out in the hall was a larger picture of one of the female apostate saints, in her finery and gown. Tied to a burning post she was looking with a calm adoration toward heaven. Two church fathers were at her side admonishing her to recant. At the foot was a servant, with one hand raising a fold in her gown to protect with modesty any view of her. With the other hand he had some tongs and was picking up her right breast, which he had just cut off, to get her to accept the orthodox dogmas of the Church’s Christian God.  No pain shown, very little blood on her gown. All is well in Heaven, with a denial of earthly existence.

Here we have a Christian god absent from nature and not close to the individual except as it involved belief in him, no concern about justice or oppression, the absence of feelings except concern and anger or adoration about belief and acceptance of the demands of the One, True God, all oriented to an extra-natural eternal existence in Heaven or Hell. Unfortunately, this view of God is the foundation of the Augustinian view of creation, that has been the dominant view of the church since the 4th century, c.e. Here is a denial of natural life, or the peaceable kingdom.

Contrast that view with the culture of the Inca. Here is reciprocity, work, and the dignity of the individual and the commonwealth. All are connected with stories and liturgy about the everyday natural forces of changing life, connected with a rather anthropomorphized vies of God and the god-heads that ennobled the humanistic values of the people. There is great room for pride in the commonwealth, respect, hospitality, nonviolent settling of disputes and a deep empirical study of the environment so that in our interaction with it, the evolutionary forces are not upset. A love of life here, now.

We are seeing, I hope, the decline of the exploitative God that has underlain European culture, from the 3rd century c.e. ‘til recently, and a return to and creative adoption of the God of creation and justice, who is  covenantal with humankind.

May it be so, my friend!

Previous The SpokaneFāVS Mixer is back!
Next Producing papal Mass ‘much like a rock concert,’ DC organizer says