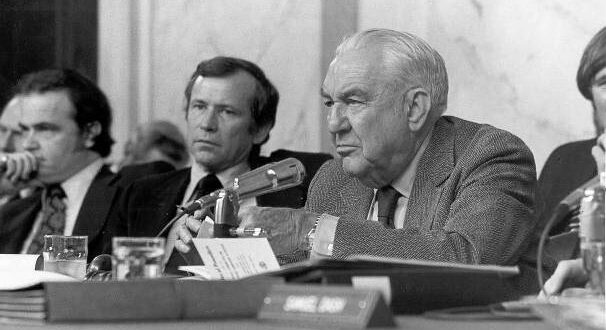 The Committee That No One Heard

The Committee That No One Heard

Print and broadcast coverage was staggering. PBS even offered gavel-to-gavel airing on its affiliate stations.

I was still in school and working part-time for The Register-Guard so I was not able to watch as much as I would have liked.

But my father, who had a sophisticated taping system, recorded every minute, hour after hour, storing the carefully labeled tapes in a box, one tape for each hearing.

When he died, we found those tapes in that old box. And I listened to some of them again, blown away once more by the sounds of democracy working to preserve the rule of law.

It is fair to say the nation was riveted by the hearings of the Senate Select Committee on Presidential Campaign Activities, better known as the Senate Watergate Committee. Members, particularly Sen. Sam Ervin, the chairman, became instant American folk heroes.

The vast majority of Americans alive today were not alive for those hearings which is a great pity. They serve as a reminder of what can happen when the system works.

The committee’s finding, aired at those hearings, led to obstruction of justice convictions of several aides to President Richard Nixon. And the committee’s work provided the framework for the articles of impeachment against Nixon that led to his resignation in August 1974.

The Watergate scandal and subsequent investigation showed the Nixon White House had tried to influence the 1972 presidential election through a combination of illegal acts – such as bugging Democratic headquarters at the Watergate complex – and school-boy pranks.

It was the cover-up of the Watergate break-in that led to Nixon’s downfall. And he might have survived even that had Republicans slavishly backed him. Instead, Republican leaders told Nixon he did not have their support, that he would have to go.

It was a triumph for American democracy and the rule of law, albeit, in retrospect, Nixon’s crimes were pale, puny things compared to what we have seen from former President Trump.

All of this comes to mind because the House committee investigating the Jan. 6 capitol insurrection and President Trump’s efforts to steal the election has now concluded its initial nine public hearings.

The hearings did receive substantial coverage, in print and on television. But the nation was hardly riveted.

As The New York Times reports, the committee had two clear goals.

First, committee members wanted the evidence to show that Trump is unfit to hold office again, anticipating his plan to run in 2024.

But this is no Watergate, and it seems clear at this point that neither goal was achieved.

As The Times notes, the Trump base is steadfast even in the face of compelling, overwhelming evidence that the former president was attempting to hold on to power by any means, including illegal actions. Trump continues to claim he was acting as he did because the election was stolen from him and so he had an obligation to respond by any means available. It is a nonsense legal argument and the “big lie” is not supported by the facts.

But the base believes and will not waver.

To truly effect Trump’s new presidential ambitions, the committee would have to persuade independent voters who will ultimately decide the next election. But with so few people showing interest in the hearings, that outcome is unlikely.

As to the second goal, Garland is not obligated to apply the committee’s findings to his own investigation. In fact, the Justice Department and committee investigators appear not to have cooperated with one another.

But even if Garland were to charge the former president with crimes, the likelihood of any sort of trial – let alone conviction – falls somewhere in hell-freezing-over territory. It is not going to happen. Legal experts largely reject the notion that Trump can be charged absent new evidence.

President Ford pardoned Nixon in September 1974, arguing a divided nation, still embroiled in Vietnam, could not withstand the trial of a former president. At the time, I thought that was the right decision, even though Ford’s defeat in the next election was in part due to voters’ anger at the pardon.

As to Trump, I have waffled. There have been times I have thought as Ford thought, that a trial would be even more divisive for a nation already split in two.

But the House committee hearings changed my mind. Trump’s raw venality, his uncompromising, unreasoned efforts to steal a fair and honest election should be aired in a court of law. There should be accountability. The rule of law should be defended.

The mindless Trump base, its Congressional and court enablers, will not do as Republicans did in 1973 and 1974 and so it should be left to the justice system to do what the political system will not.

I do not know if Trump can be elected again. It is too early for predictions, in large part because we do not know who will be the Democratic nominee. Biden may not run again, and Vice President Kamala Harris is thought by many in party leadership to be unelectable.

But it seems clear the election will not be affected in any meaningful way by the committee hearings just concluded.

Nearly 50 years later, it is amazing to me that we might look back on those Watergate hearings as a high point in American democracy even as Nixon’s crimes seem pale and puny in comparison to Trump’s.