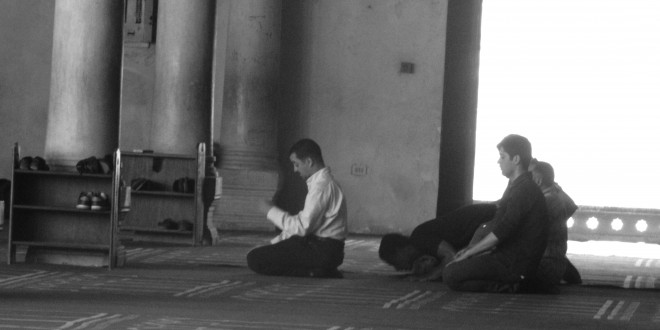 The Colors Are Running Together

Recently, Spokane FāVS received a request. A disturbed reader wanted us to respond to a photograph that had gone viral. It states, “Japan has been at peace with the USA since September 2, 1945. It’s time we made peace with Islam.” The “peace” they speak of is an atomic bomb. Its presence is the focal point between the two statements on the photograph.

Besides challenging the audacity to blame all of Islam for the increasing terrorist attacks by those who use Islam as a political ploy, the first question I had when I saw this photograph was, “Why hasn’t this hateful piece of prejudiced propaganda been taken off of Facebook?” Our concerned reader answered that in her original post. After contacting Facebook to have the picture removed, she received what she assumed to be an automated response that they did not find the picture in violation of Facebook conduct, and so it would continue to have the ability to float around.

I took a closer look at the photograph and saw that it had 138,000 likes. This is scary. Not the photo. Not the religion of Islam. The widespread harmful generalization of the fastest growing religion on our planet today. The fact that someone, and apparently hundreds of thousands of others, feel supportive of dissipating a religion with over a billion members needs to be addressed.

“This is ignorance at a higher level, this (Islam) is the fastest growing religion, we’re (Muslims) not just in one place. We are all over the world. So are you going to kill innocent people in many places to accomplish this (what the photograph suggests)?” This was Amina Abdi Ahmed’s response to the photo. A student at Gonzaga studying pre-med, Amina is a practicing Muslim. She is from Somalia, a country that currently boasts a Muslim population of almost 100 percent. Amina grew up studying the Koran, and states that it in no way advocates for the barbaric behavior and violence being put forth by ISIS.

“Islam itself means peace. In Islam, if you kill someone who is innocent, you’ve killed all of humanity,” she said. However, Amina is quick to acknowledge her understanding of how Islamophobia has risen up in the West.

“In Somalia, people practice female genital mutilation. That is Somali culture. This is an awful practice; however, it is Somali culture, not Islam, that promotes this behavior. But people like to mix their culture with their religion to justify things.” This is how the association of Islam with all these horrible practices gets mixed together, and people who do not understand true Islam, as Amina stated, become fearful. And as the photograph that was sent to Spokane FaVs demonstrates, fear acts as the perfect environment for prejudice to grow.

This widespread misunderstanding of Islam also comes from the polarity of two different cultures that have never really intermingled, according to John Sheveland, a Yale Divinity School Alum with a PhD in Systematic and Comparative Theology. He is also a professor at Gonzaga University.

“There is something unique about the Middle East or west Asia in the minds of Americans; we seem to know so little about the region and its history. My sense is that we do not differentiate very well between Arab and other residents of the Middle East reacting to specific political and economic conditions, versus the fact that these same people are Muslims.” Amina’s sentiments went on to echo Dr. Sheveland’s statement.

“Ever since 9/11, these terrible groups (ISIS, Taliban, Al-Qaeda) have been using the Koran to add their twisted culture to our religion. And it gives Islam a bad name in the West.” Especially when many Westerners are already turned off by how foreign the culture of those we often associate as Muslim—Arabs is to us.  But I had to wonder why in the midst of all of this chaos surrounding ISIS, no one has seemed to be mourning for the people who have been most heavily effected by their presence—Muslims. Amina said this fact is what hurts her the most.

“I feel as though the general dislike of Islam makes many Europeans and Americans not care. They say things like, ‘let them kill themselves’. But we are not them (ISIS)! Syria, especially, children have been killed, no one changed their flag to Syria. People don’t just pack up and move for fun. 200 people died in Paris, thousands have died in Syria and other Muslim countries at the hands of ISIS.”

So what is it that makes too many Westerners support photos like the one that was sent to SpokaneFāVs? Amina feels it’s the deadly combination of religion and race.

“White privilege is definitely present in this discussion. If the Oslo, Norway shooter would have been of Arab descent he most definitely would have been persecuted and villainized in the media much more than he was. But this shooter, who proclaimed to be Christian, was hardly talked about post incident in the states.”

The incident Amina is referring to occurred in 2011 in Oslo, Norway. Anders Behring Breivik killed 77 people with a bomb and a rifle, many of whom were children, in an act against multiculturalism in Norway. When I researched the incident almost every article I came upon labeled him as a “right wing extremist”. The media just couldn’t bring themselves to label him what he was, a terrorist. But why?

The unintentional bias that comes from being part of a group that’s often identifiable doesn’t help. Amina spoke about this. Many Muslims are identifiable by what they wear, as well as the fact that many, though not all, Muslims are also of Arab descent.

For those who don’t want to recognize the race element present, let’s look at the KKK. The FBI still classifies them as a hate group, not a terrorist group. In fact, since their inception, they have been protected in spreading unapologetic bigotry under the freedom of speech clause. In fact, in 2015 there is a petition going around to officially list the Klu Klux Klan as a terrorist organization because it still hasn’t happened. Is the fact that many Christian groups consisting of Caucasians, who commit terror in the name of God, have the privilege to drop the word terrorist from their classification, a coincidence?

According to Sheveland, there’s also a biological human element involved in this bias many Westerners often gravitate towards.

“There is some recent research by Nartha Nussbaum that argues for the idea of us having an evolutionary, biological tendency to fear the unknown.” So in relation to being unfamiliar or uncomfortable, when we see Muslim men or women who choose to wear traditional Muslim or culturally Arab attire, this reason, as Dr. Sheveland continues, “may actually play on our evolutionary predisposition to fear and protect ourselves from what we do not know or recognize.”

After my interview with Amina, I realized that Islam has a lot going against its favorability in Western eyes. Its population consists of a very large number of Arabs, people many Westerners too often associate directly with those who committed 9/11, and in present time, those running ISIS, who are of Arab descent. Plus the fact that these terrorist organizations are committing these acts against humanity in the name of Islam. Then add in the general lack of knowledge surrounding what exactly Islam is and how to separate it from the myriad of cultures of the 1.57 billion people who practice it.

Plus, as Sheveland pointed out, “It is simply the case that people tend to differentiate members of their outgroups less well than the members of their own group, especially when then outgroup is not tangibly known or experienced. I think social psychology has demonstrated this tendency fairly well.”

“There was an interfaith dialogue on campus a few weeks ago. It was really refreshing. But one of the professors there made a statement that stuck with me.” When Amina told me what the professor had said, his words stuck with me as well. She told me that he said, ‘Two things are going to destroy this world; religion and race”.

Ironic that this is the note Amina and I ended on, as the photo sent to SpokaneFāVS was created with intolerance that began with these two inescapable human realities.

Previous Think of SpokaneFāVS on this Giving Tuesday
Next Zombie Nativity: An irreverent addition to holiday pop culture