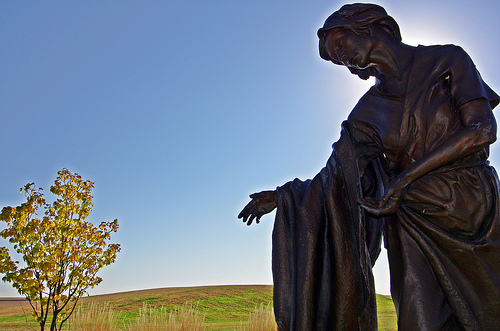 The church can’t forget about compassion

About two years ago, I was making plans to hang out with a friend over the weekend. When he asked me if we could meet on Sunday rather than Saturday, I hesitated. I had church in the morning, and a Bible study later in the evening. “That wont work for me” I said. I then explained why. He laughed at me. “There is no God,” he said defiantly.  I, being neither brave nor clever enough to accept that statement as truth, tactfully steered the conversation back to the matter at hand and we agreed to Saturday afternoon instead.

What makes this incident interesting is that my friend used to be just as devoted to church as I was. But he came out the year before, and was not met with the welcoming arms of the congregation. After being rejected every week for months, he left. Not just his church, or his religious tradition, but God. I always found this vexing, but honestly can’t blame him. The flock can be fickle. My vexation though, comes from my friend’s understanding of God and the church. The two are separate and distinct, although in modern times it is easy to forget that. To me, God is love and unflinchingly forgiving. The church however can at times seem the exact opposite, especially to those who are seen as different. Outcast. Sinners. As if there are those in the church who are without “sin” themselves.

To me, the church exists because we are all sinners. No one — no matter how dramatic their frocks, how imprinted Scripture is on their mind, or how tall their hat is — is worthy of judging others. I have found this to be true, not just in my own religious tradition, but in all of them I have encountered thus far. And believe me, as a religious-studies major, who founded the Compassionate Interfaith Society, who has worked at the Pluralism Project at Harvard, I’ve been around the theological block a few times. All of the great teachers throughout time have said the same thing: a spiritual life is a life full of hope, love and forgiveness. Looking around the world today, there aren’t too many people who are leading a spiritual life anymore. Perhaps its because we have become too self-centered. Perhaps it’s because of capitalism. Perhaps its because we are too disconnected from one another and too connected to our technology. Whatever the reason, there is something amiss in the flock.

Many who tote the title Christian have forgotten the true essence of religion itself: compassion. Compassion is probably the most luminous experience anyone can ever encounter. It is the vehicle by which we transcend ourselves and it is what makes us fully human. The very point of the teachings of the Buddha, Christ, the Prophet Muhammad, the Sikh Gurus and all of the keepers of wisdom is to gently remind us of our own capacity to love and to show compassion to others. It only works, though, if you extend your compassion to people outside your own “group.” Christians extending compassion to only perceived Christians further alienates us from ourselves and from the reality that these barriers we build for ourselves to separate and categorize are not unflinchingly rigid, but don’t exist at all. Buying into this lie would be, as the Buddhists say “unskillful.”

To quote the Charter for Compassion:

“The principle of compassion lies at the heart of all religious, ethical and spiritual traditions, calling us always to treat all others as we wish to be treated ourselves. Compassion impels us to work tirelessly to alleviate the suffering of our fellow creatures, to dethrone ourselves from the centre of our world and put another there, and to honor the inviolable sanctity of every single human being, treating everybody, without exception, with absolute justice, equity and respect.

It is also necessary in both public and private life to refrain consistently and empathically from inflicting pain. To act or speak violently out of spite, chauvinism, or self-interest, to impoverish, exploit or deny basic rights to anybody, and to incite hatred by denigrating others — even our enemies — is a denial of our common humanity. We acknowledge we have failed to live compassionately and that some have even increased the sum of human misery in the name of religion.

We therefore call upon all men and women ~ to restore compassion to the centre of morality and religion ~ to return to the ancient principle that any interpretation of scripture that breeds violence, hatred or disdain is illegitimate ~ to ensure that youth are given accurate and respectful information about other traditions, religions and cultures ~ to encourage a positive appreciation of cultural and religious diversity ~ to cultivate an informed empathy with the suffering of all human beings—even those regarded as enemies.

We urgently need to make compassion a clear, luminous and dynamic force in our polarized world. Rooted in a principled determination to transcend selfishness, compassion can break down political, dogmatic, ideological and religious boundaries. Born of our deep interdependence, compassion is essential to human relationships and to a fulfilled humanity. It is the path to enlightenment, and indispensable to the creation of a just economy and a peaceful global community.”

I think the church itself should take some time to remember the value of compassion. It seems that far too often we hear preaching the Bible from the pulpit and no preaching the Gospel. Perhaps then we would stop judging and actually start loving our neighbors. And by loving, I mean show compassion to them. It is the only way we can understand one another and change the world for the better. No person or institution has the right to limit the connection between a spiritual person and their spiritual path. When this happens, no matter where, and no matter why, we should stand up and remind both sides of why it is we’re hear and what we’re called to do.