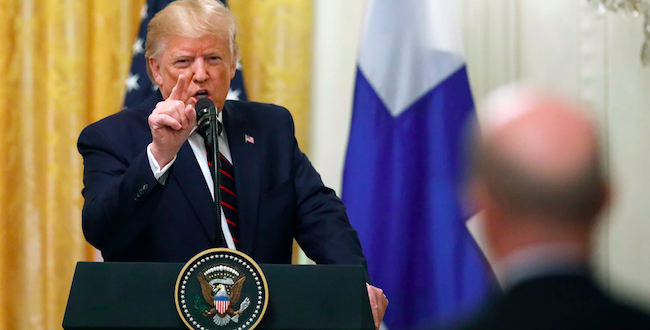 President Donald Trump speaks during a news conference at the White House in Washington, on Oct. 2, 2019. (AP Photo/Carolyn Kaster)

Lie: An untruthful assertion. The speaker intends to cause belief in the truth of a statement that the speaker believes to be false. Hence, a lie involves an intention to deceive. The speaker also implicitly assures or promises the hearer that the statement that is made is true – Stanford Encyclopedia of Philosophy

Donald Trump is a serial liar and is the architect of “The Big Lie.”

I do not qualify this statement, made as a long-time journalist and journalism ethics professor and with full knowledge that the statement carries ethical implications.

My readers will not be surprised by this, of course. I have called Donald Trump a liar many, many times. But whether Trump is a liar and whether the term “Big Lie” is journalistically appropriate has been the subject of some debate within FāVS this week following the posting of this column, though not as much debate as you might expect.

First, is Donald Trump a liar. As The Washington Post’s Fact Checker has noted for several years, Trump is guilty of thousands – that is right, thousands – of misstatements since he emerged as a political candidate in 2015. Not all misstatements are lies. Some of Trump’s gaffes are simply the result of political exaggeration, simple or even willful ignorance. and fantastical thinking. But he also has lied.

Consider his repeated assertions that former President Obama is not an America citizen and so not eligible for the presidency. Trump knew that assertion was false, knew it for years but repeated the claim for his own political advantage. And that is just one lie.

Journalists were reluctant to use the “L” word in the first months of Trump’s presidency. Some argued it is not appropriate to call a person a liar because we cannot read their mind, we cannot discern intent to deceive and separate it from willful stupidity. But the debate ended for most news organizations as Trump’s first year in office came to a close.

When the president of the United State is presented evidence from reliable parties in and outside of his own administration and still asserts the opposite for political gain, that is a lie. And news organizations and media ethicists (those not affiliated with Fox News and its fellow travelers) concluded there is no ethical issue in saying so.

Of course, his latest and most consequential lie concerns the 2020 election and the subsequent Jan. 6 insurrection. Donald Trump lost that election and by a margin greater than his win in 2016. That result was confirmed by courts at the state and federal level – and confirmed by Trump’s handpicked Supreme Court which refused to hear several appeals. It was affirmed by state and local election boards and secretaries of state. It was confirmed by federal investigators and by Trump’s own Justice Department. It was confirmed by recounts, including the bogus, amateurish, and partisan recount in Arizona. Trump’s supporters in Congress agreed, including our own local Trump sycophant, Cathy McMorris-Rodgers. Even Trump’s own family reached that conclusion.

Trump may be a narcissist. He may be unstable. He may even be a criminal. But he is not stupid. In the face of that overwhelming and undeniable evidence he claimed, and continues to claim, the election was stolen through massive voter fraud which was never found by anyone. That constitutes a lie.

Further, when the rally he promoted devolved into a riot at the Capitol last Jan. 6, he argued, and continues to argue, the rioters were peaceful patriots, maybe even tourists, victims of violence on the part of federal police or even antifa. His most loyal supporters and family members told him otherwise. He lied.

Why do we refer to the claims of a stolen election as “The Big Lie.” Because it is so consequential. The lie undermines trust in our democratic systems. It undermines the rule of law. It undermines faith in government. And people acting on that lie are actively using it as an excuse to limit the franchise in order to support Trump or one of his assigned lackeys in the 2024 election.

Some Trump supporters, in Congress and even in the right-wing media, repeat the election claims knowing they are false for political gain. We know they are lying because earlier they accepted the election result but then reversed field so as to keep Trump’s support.

But can the “L” word be applied to the millions of Trump believers who accept it as fact? No. I do not believe in a god but cannot call those who do liars because religion is about faith, not fact-based evidence. In the same way, millions of Americans have a religious-like faith in Donald Trump. They do not repeat the lies for personal gain. They simply believe.

The father of American public relations, Edward Bernays, authored the book “Propaganda” in 1928. Bernays articulated the idea of “engineering consent,” the ways and means a propagandist can make people believe his ideas are their own. The book was the blueprint used by the Nazis to brainwash a portion of the German population big enough to provide cover for the greatest atrocities of the 20th Century.

Donald Trump is not a Nazi (though he seems to be a fascist in the making) and comparisons to the Nazi era are not appropriate. I am not making that comparison. But “The Big Lie” is rooted in classic propaganda methodology and we can actually see Trump engineering public consent to his anti-democratic agenda.

So, Trump is a liar and is the architect of “The Big Lie” which presents an existential threat to our democracy.

To view this as a media problem and less a Trump problem is head-in-the-sand denialism.

To hide oneself behind handy labels while Donald Trump marches us to the precipice is not courageous. It is dangerous.

Previous How to Worship God: A Complete Guide
Next Father reflects on faith journey after hazing death of Sam Martinez