Home / News / The Bible – helpful, but not read much 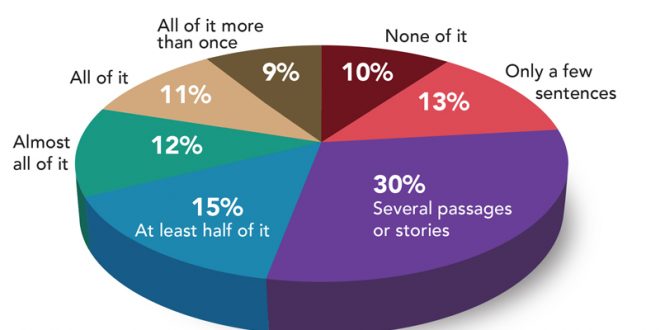 The Bible – helpful, but not read much

(RNS) The Bible may be a source of wisdom for many Americans but most don’t read it for themselves, a new survey shows.

One-third of Americans have never picked up the Bible and more than half have read little or none of it, reports LifeWay Research.

“Even among worship attendees less than half read the Bible daily,” said Scott McConnell, executive director of the evangelical research firm based in Nashville, Tenn.

“The only time most Americans hear from the Bible is when someone else is reading it.”

The survey of 1,000 people found disparate approaches to the holy book. For instance, Northeasterners are less likely to give it a look than people in other regions. And men are less inclined than women to pick it up.

One in 5 Americans have read the entire Bible at least once — including 9 percent
who’ve read it through multiple times. Just over half (53 percent) have read relatively little of it, and 1 in 10 haven’t read it at all.

Slightly more than a fifth of Americans (22 percent) read a little Scripture each day, taking a systematic approach. About a quarter (27 percent) read parts others have suggested, and 16 percent look up portions to help others. Almost one-fifth (19 percent) reread their favorite passages.

Researchers found that Americans tend to view the Bible positively, with half (52 percent) saying it is a good source for morals. More than a third say it is helpful today (37 percent), true (36 percent) or life-changing (35 percent). And far fewer say it is outdated (14 percent), bigoted (8 percent) or harmful (7 percent).

So why don’t people read the Bible? They:

The survey of 1,000 people, drawn from a panel designed to be representative of the U.S. population, was conducted Sept. 27-Oct. 1, 2016, and had an overall margin of error of plus or minus 3.1 percentage points.

Previous Crotch-grabbing not necessarily sexual, according to Spokane judge
Next Ask A Muslim: Islam and Jinn 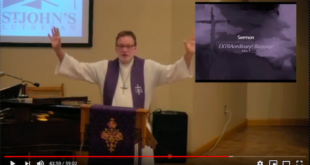