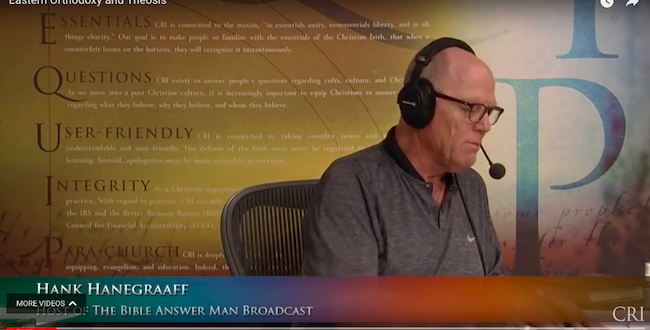 Hank Hanegraaff had served as the president and chairman of the board of the North Carolina-based Christian Research Institute (CRI) since 1989 when he also took over previous president’s radio talk-show “The Bible Answer Man.” The show includes answering questions about matters of Christian doctrine and history and Biblical interpretation, and denominational particularities.

The above reference was written by Fr. John Peck author and founder of Journey to Orthodoxy.

Up until the time of the Reformation (the 1500’s AD), Eastern and Western Christianity believed in theosis. For Eastern Orthodox Christians, theosis is and always has been a centerpiece of our faith and journey. Theosis can best be described as the purpose and intention of God’s will for mankind.

Theosis: A gradual process of the transformation of the self-centered individual into a community of love, made possible by the indwelling of the Holy Spirit of God.  Galatians 2:20:  “I have been crucified with Christ; it is no longer I who live, but Christ lives in me….”

Genesis 1:26 Then God said, “Let us make man in our image, according to our likeness.” We are created in God’s image (love—a giving of one’s self to another) and God’s likeness (holiness– participation in what is Good and therefore what is moral) to become “like” him.

Why would we want to do any of this?  Because if you want to be with Christ who is love for eternity, one must become love!  For in 1 John 4:8 “He who does not love does not know God, for God is love.  Why then would you NOT want to be like him to share with God all that he has to offer?

God became man so that man, by God’s grace and mercy, could become what God is by nature. Adam and Eve before the fall lived in communion with God. God, himself was their eternal source of life, and they freely partook of the fruit of paradise not ever experiencing or even knowing at this time of non-existent sin and death.

For Orthodox Christians, theosis is salvation (see 2 Pet. 1:4 promises that through these (promises) you may be partakers of the divine nature).  Theosis assumes that to become fully human one must share in the Life or Nature of the all-Holy Trinity, a community of love.

At the center of theosis, the sacraments provide a means and medicine for our healing and recovery from our state of imprisonment of our prideful self-centeredness.  Participating in the mystery of the Eucharist is, in essence, an essential connection to the life source that begins this transformation.

The reason why Christ died on the cross was not only for the forgiveness of our sins, to reveal who he is and His unconditional love for us, but for mankind to now have direct access and the opportunity to be united once again with him in the garden of paradise.

Previous Spokane churches ask: Where are the youth?
Next My here-and-now spiritual faith