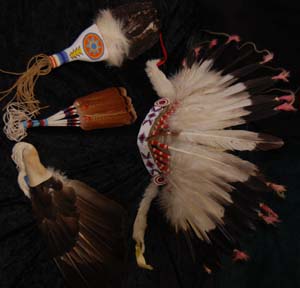 The American Indian and religious freedom

It may come as quite a shock to discover that in a country which prides itself on claims of religious freedom for all, that basic freedom was denied to the very people who inhabited North America first: the American Indian.

Can you imagine the need to hide outside in the big woods to practice your religious beliefs? Can you imagine having your children taken from you against your will and sent to a boarding school where they were beaten for speaking their own language? Can you imagine not being able to hold a give-away because the idea of wealth being measured by what you could afford to give away was such an unfamiliar thought? Those just some examples of the injustices that American Indian people had to contend with over the years.

Is it any wonder that Indian people do not readily share their ceremonies and ways with the general public? The American Indian ways are very different than those of other religions. They do not try to persuade you to accept their beliefs and join their church. They are happy that you have your own ways.

As my spiritual elder taught me, it is not so important how you believe, but that you believe in Creator (God) with all your heart, and through your own faith and your own ways. Because when things go wrong in life — as things will — your faith may be all you have to hang on to in order to weather life's storms.

As far as the role of other religions, I like to make a comparison to a wheel. The Creator is the hub, and the different religions are the spokes coming out from the hub. The wheel can't turn without the spokes … and neither can the world. We must realize that we are more alike than we are different.

We have come so far and now is the time to think about how strong we can be as an interfaith community, a community where we learn about each other and support each other through our different faiths, and our different ways. Different tribal representatives from the Indian spiritual community know that this is the time in earth’s history to share our knowledge with others.

The denial to American Indian people of the right to practice their religion and their traditional ceremonies continued until 1978 when the American Indian Religious Freedom Act passed into law. The law was created to give Indian people the same Constitutional rights that the rest of the country’s citizens had enjoyed throughout U.S. history. The law protects American Indians as well as Native Hawaiians, Eskimo and Aleut peoples.

Click here to read a statement President Jimmy Carter made when he signed the bill into law.

Below is the text of the American Indian Religious Freedom Act:

Whereas the religious practices of the American Indian (as well as Native Alaskan and Hawaiian) are an integral part of their culture, tradition, and heritage, such practices forming the basis of Indian identity and value systems;

Whereas the traditional American Indian religions as an integral part of Indian life, are indispensable and irreplaceable;

Whereas the lack of a clear, comprehensive, and consistent Federal policy has often resulted in the abridgment of religious freedom for traditional American Indians;

Whereas such religious infringements result from the lack of knowledge of the insensitive and inflexible enforcement of Federal policies and regulations premised on a variety of laws;

Whereas such laws were designed for such worthwhile purposes as conservation and preservation of natural species and resources but were never intended to relate to Indian religious practices and, there, were passed without consideration of their effect on traditional American Indian religions;

Whereas such laws and policies often deny American Indians access to sacred sites required in their religions, including cemeteries;

Whereas such laws at times prohibit the use and possession of sacred objects necessary to the exercise of religious rites and ceremonies;

Whereas traditional American Indian ceremonies have been intruded upon, interfered with, and in a few instances banned;

Now, therefore, be it Resolved by the Senate and the House of Representatives of the United States of American in Congress Assembled, That henceforth it shall be the policy of the United States to protect and preserve for American Indians their inherent right of freedom to believe, express, and exercise the traditional religions of the American Indian, Eskimo, Aleut, and Native Hawaiians, including but not limited to access to sites, use and possession of sacred objects, and the freedom to worship through ceremonials and traditional rites.

SEC. 2. The President shall direct that various Federal departments, agencies, and other instrumentalities responsible for the administering relevant laws to evaluate their policies and procedures in consultation with Native traditional religious leaders in order to determine appropriate changes necessary to protect and preserve Native American religious cultural rights and practices. Twelve months after approval of this resolution, the President shall report back to Congress the results of his evaluation, including any changes which were made in administrative policies and procedures, and any recommendations he may have for legislative action.

Valerie Crow is a writer for ToledoFAVS.com.