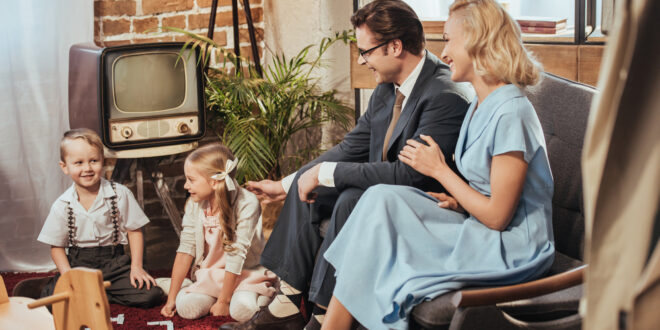 The America That Never Was

The America That Never Was

In retirement I watch more TV than I probably should. And my favorite non-movie cable channel is MeTV.

MeTV broadcasts classic television from the 1950s and 1960s. And in the morning, I sometimes watch an hour of “Leave it to Beaver.”

Beaver was about a middle-class American family, the Cleavers, living in an anonymous Midwest town. The father always wore a suit unless dressed for golf. The mother wore dresses and heels, even in the kitchen, and always wore a pearl necklace.

There was a teen boy and his brother, Beaver, who was a mischievous little rascal.

The show was immensely popular then and immensely popular now. It depicts a Hollywood world where the biggest crisis is about who to take to the school dance. It is a world without people of color, without immigrants, without Jews or Catholics or really any religion, without poverty or crime or guns or war.

It is, in fact, an America that never existed.

In the evening, I sometimes watch the old Andy Griffith show from the early 1960s. The show is set in the fictional town of Mayberry, N.C. But it is a North Carolina without any black people, without the KKK, oblivious to the Civil Rights movement sweeping the South in those very years.

It is an America that never existed.

I watch these shows because they are nostalgic, the TV shows of my childhood, and because they can be entertaining. But I do not accept the world they portray as reality.

And herein lies the problem. There are forces at work in this country using everything in their power to return us to the America that never existed, to the America of Beaver Cleaver and Andy Griffith.

They want to erase our history of racial oppression and once again disenfranchise people of color. They want to pretend we are not a nation of immigrants, that the door should be sealed unless the immigrants are from Sweden or Finland.

There are forces at work to return women to the kitchen where Beaver’s mother cooked in pearls and heels, to deny women the right to control their own bodies.

And there are forces at work to turn back the clock on our growing acceptance of, even our understanding of people whose sexual identities and orientations are different from what they consider normal.

Gender issues, in fact, have become the most critical front in this war. And the lead warrior is Florida Gov. Ron DeSantis.

He is the Donald Trump wannabe actively courting the Trump base in hopes the former president does not or cannot run again.

To keep the Trump base fired, he has fought any reasonable gun control regulations, he has downplayed and even acted against reasonable COVID policies and he has used the phony Critical Race Theory debate as an excuse to order Florida schools to avoid discussing race. He has picked culture-war fights with Disney and now with the Tampa Bay Rays baseball team, withdrawing state financial incentives that could drive those companies to reduce their Florida footprint. The base loves it.

And he is waging a vicious, unrelenting war against the LGBTQ community. June is national Pride Month so it is necessary to recognize this war that is sweeping through red states, including Idaho.

The campaign is aimed at all LGBTQ communities. The “don’t say gay” legislation signed by DeSantis in March essentially prohibits public school teachers from teaching anything about gender identity or sexual orientation, all in the name of protecting parental rights. Books dealing with those subjects are banned. Similar legislation is now being introduced or will soon be introduced throughout the red universe.

The latest and most insidious challenge is to the trans community. Medical science has shed enormous light on the complexities, the fluidity of human gender. There is no room here to describe all its nuances. This summary from the Mayo Clinic is a good start.

But in the DeSantis world there is no room for scientific complexity. In his world, the Beaver Cleaver America that never was, there is room only for binary gender, male and female.

So last year, on the first day of Pride Month, he signed legislation that would prohibit trans women from competing in women’s athletics, contradicting even NCAA policy which establishes hormone levels, not birth certificates, as the standard.

And just last week he announced new policies that would deny needed medical assistance for trans children. What level of hate is required to wage war against children? What level of bald-faced ambition?

My dear Carla worked two years as executive director of Odyssey, a Spokane facility serving at-risk LGBTQ youth. It was there that I was first exposed to trans children. These were not young people who had fallen for some gender identity fad. They were confused, uncertain, often in pain, and facing the worst possible discrimination, frequently in their own families. Statistics say they will suffer higher rates of suicide than other children and will be more likely to experience violence.

DeSantis would wage war on such children. Despicable.

But the Trump/DeSantis base does not recognize human complexities that do not fit in the Beaver Cleaver/Andy Griffith world, the America that never existed.

And if that base regains power in a system that devalues majority opinion, as seems increasingly likely, the gains made by the LGBTQ community will be rolled back.

That should concern all of us. Making war on women, people of color, and LGBTQ communities is just the start. Those of us not in the mainstream will be at risk.