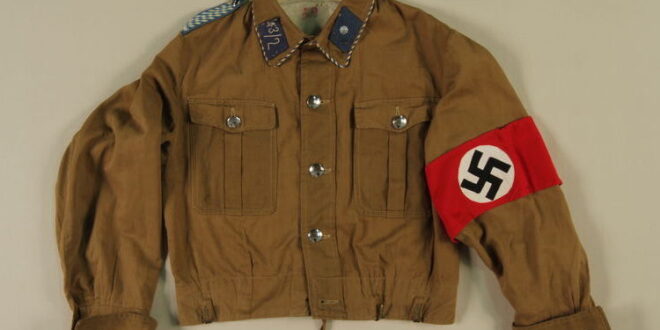 I was sitting in a local coffee shop visiting with an old friend.

It was a Friday morning, and the place was crowded, only a couple of open tables.

I had just started sipping my cup of strong black coffee when he walked through the door.

The man was somewhere in his early to mid-30s. His hair was jet black and slicked back. He was tall, large, a bit soft.

It was his clothing that caught my attention.

He wore loose, rather sloppy black slacks with scuffed black shoes. His shirt was a bit too tight, brown, like coffee with cream, sleeves rolled down and buttoned at the wrists. He wore a thin black tie, the knot closed tightly at the throat. And diagonally, across his chest, a brown strap.

I did not take a photo. But I did not have to. Anyone with any sense of 20th Century history recognizes the look.

All that was missing was the swastika arm band.

He sat alone at a small table writing in a notebook. No one sat close. After half an hour, he left, strolling casually through the coffee shop, on a mission I thought, making a statement.

Yes, his clothing might simply have been a matter of chance. He might have been just one more South Hill resident looking for a good cup of coffee on a sunny Friday morning and wearing whatever he had in his closet.

It was earlier this month that Idaho police arrested 31 white supremacists on their way to Coeur d’Alene with plans to riot at that city’s gay pride event. They wore uniforms, too. And when they left their motel rooms to load into a moving truck, an alarmed bystander called police.

It would have been easy, perhaps, for that bystander to conclude he was just being paranoid. It was a from-the-gut reaction that turned out right.

This is the age we live in.

Teachers tighten up just a bit when they see a stranger in the hall.

Black people tighten up when they see a police car following.

Latinos tighten up when the ICE agents get on the bus.

Neighbors tighten up when their video doorbell shows a stranger approaching.

I tighten up when a car passes slowly by our house with the driver staring at our pride flag.

The term describes a legitimate mental health condition. But I use it here in the common sense, a sometime irrational distrust of others.

But maybe it is not always so irrational. These are the times we live in.

As I thought about paranoia, it became clear to me that I truly trust very few people. My dear Carla. Family. A few close friends and colleagues.

But trust in institutions is hard to come by.

I have little trust in government these days and no trust at all in politicians.

My readers know I have no trust in religion or religious institutions.

As much as I loved teaching, I never trusted University of Idaho leadership which always seemed more interested in personal ambition than student education.

But in this age of paranoia, it is my loss of trust in individuals that is most troubling. And I do not know how to get it back.

Friday, the brownshirt was writing in his journal and I was sipping my coffee. There was a loud bang, like a gunshot. Someone had dropped something heavy to the floor, maybe a book.

There was an audible gasp as people turned to see what had happened. Everyone flinched. We all know what such loud sounds might mean.

But as they looked to the place of the sound, I looked at the brownshirt.

I knew he was making a statement on this Friday.

But my paranoia is such that I could not be sure what kind of statement he might make.

I have no trust. And that is so, so sad.

View All Posts
Previous Time away from the office leads to a lesson in letting go
Next Poll: American’s Belief in God is Dropping