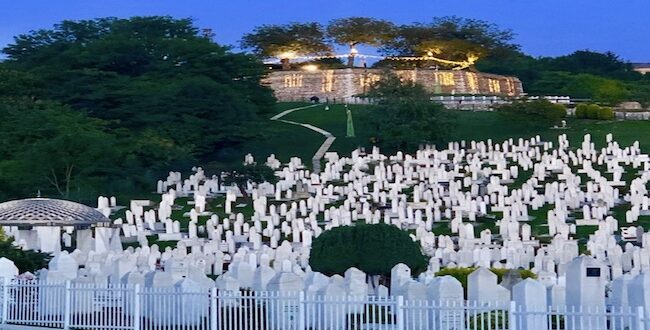 The Afterlife: When Life Begins

The Afterlife: When Life Begins

Editor’s Note: SpokaneFāVS is wrapping pu a series of columns on the subject of life after death. This long fascination with the afterlife crosses centuries, cultures, geography, religions, philosophy and science. What does life after death mean? Is it a subjective existence, a continuation of our consciousness or personhood as we knew it on earth? Is it a bodily existence, or a disembodied/spiritual existence? Who or what decides the character of the afterlife ? Is it possible to believe in God and deny life after death? If there is no afterlife, does that mean religion has lost its purpose? Does it mean our lives on earth are meaningless?

Last year I came across a book called “Jab Zindagi Shuru Hogi” (When Life Begins) by Abu Yahya. It is a popular book and recommended by many Pakistani Muslims, so I wanted to read it too. Since I am old school, I was looking for a hard copy and luckily a friend of mine had one and loaned it to me. The book is a fictional account of the day of resurrection as per Islamic eschatology in simple words for a layperson to comprehend. It is a story about a person who has resurrected on the day of judgment. His accounts are based on how the resurrection day is described both in the Quran and Hadith’s (sayings of the Prophet Muhammad PBUH).

In this novel, the writer after finding himself on the day of judgment, takes us on his journey to share what he finds out about his destiny and the destiny of his family, friends and acquaintances in the “Afterlife” known as “Akirah.” The story shows us that on this day, we will all be rewarded of our good intentions and deeds and vice versa. Indirectly the writer warns us of the ultimate reality that is yet to come after our souls will depart this world and we will be resurrected again.

They say, ‘There is only our life in this world; we die, we live, nothing but time destroys us.’ They have no knowledge of this; they only follow guesswork. Their only argument, when Our clear revelations are recited to them, is to say, ‘Bring back our forefathers, if what you say is true.’ [Prophet], say, ‘It is God who gives you life, then causes you to die, and then He gathers you all to the Day of Resurrection of which there is no doubt, though most people do not comprehend.’ Quran 45:24-26

Afterlife is one of the fundamental beliefs in the Abrahamic faiths and as well as in many other faiths. Some faiths have described step by step path leading up to afterlife and some do not know what it would be but still believe in it. Whether it is Islam, Christianity or Judaism, all three monotheistic religions consider it as an important principle. In Islam, your faith only completes when you believe on both principles of monotheism and afterlife. The main source of authority is of the Quran however, both the Quran and Hadiths reiterates its significance repeatedly. Especially the Quran graphically describes the resurrection, the last day, and then our eternal destiny. Both heaven and hell are also graphically described, and the comparisons are repeatedly made, joys and delights vs. ragging fire of immortal life. Resurrection is also an indication and reconfirmation of the fact that there is a “Creator” to whom we shall all return.

“Did you think We have created you in vain, and that you would not be brought back to Us? Exalted be God, the True King, there is no god but Him, the Lord of the Glorious Throne!” Quran 23: 115-116

Along with the principles of monotheism and resurrection, a Muslim’s life revolves around the five pillars of Islam: Shahada (profession of faith), Salah (Prayer), Zakat (Obligatory Alms), Sawm (Fasting) and Hajj (Pilgrimage) to gain the ultimate rewards in the afterlife. However, the Quran and the Hadiths also teach us that it’s not only about following the rituals of these pillars. But it is also about learning from these rituals and then implying those learnings in our practical lives. These rituals teach us to be good to others, to have humility, humanity, justice, equality, honesty, kindness and forgiveness. These learnings then build up our character. In short, Muslims live their lives mainly for the afterlife and constantly struggle to work towards heaven.

Knowledge of the Hour [of Resurrection] belongs to God; it is He who sends down the relieving rain and He who knows what is hidden in then womb. No soul knows what it will reap tomorrow, and no soul knows in what land it will die; it is God who is all knowing and all aware. Quran: 31:34

Ultimately, we all have a destination known or unknown. We do not know when we will leave this world, but it will happen.

Before we leave this world, we can be kind to each other. We should only be a source of peace in this world so we can also have peace in the eternal afterlife.