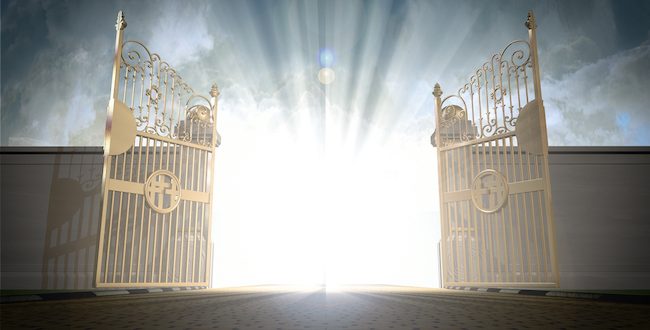 A depiction of the pearly gates of heaven/DepositPhoto

The Afterlife: Just Desserts — Here and Now? Or Hereafter? (Or…?)  

The Afterlife: Just Desserts — Here and Now? Or Hereafter? (Or…?)

It comes as a surprise to many that, historically speaking, the afterlife doctrines of the Abrahamic religions are a relatively late development.

Ancient Israelite thought knew little of an afterlife. There was Sheol (“the Pit,” where everyone went after death, rather like the Sumerian-Babylonian “house of clay,” or the Greek Hades). But this was at best a shadowy existence, about which one thought as little as possible. Sheol was essentially just the grave, which “swallows” us all indifferently when we are buried. We encounter it most prominently in the Psalms, where supplicants implore God not to let them go down prematurely to Sheol, praying that they might rather be kept alive, so that they might continue to sing God’s praises in the congregation (Ps. 6:4-5, Ps. 88:3-5; cf. Is. 38:18-19).

Since Sheol swallows everyone without distinction, it serves no moral or disciplinary function. The predominant understanding of divine justice, throughout most of the long historical period covered by Hebrew scripture, involves rewards and punishments this side of the grave. The idea finds its clearest articulation in the book of Deuteronomy, which contains no clear references to an afterlife. Two of its concluding chapters (27–28), however, consist of long lists of blessings and curses predicted to befall its addressees already in this life, depending on whether or not they remain faithful to the covenant.

Deuteronomy is closely patterned on contemporary (and earlier) secular covenant treaties, which bound members of a “vassal” nation in fealty to a human “suzerain” or overlord. Here, Israel is understood as having entered (as vassal) into such a treaty, but with God (not a human lord) as suzerain.  The standard secular treaty formula promised the vassal party this-worldly blessings for adhering to its terms, and corresponding curses for violating them. From this perspective, it should hardly be surprising that the “Deuteronomistic” notion of divine justice focuses strictly on consequences in the here and now.  (Nor should we be startled at the vehemence of the curses; this was just standard treaty boilerplate, throughout the ancient Near East.)

So how did we get the idea of an eternal afterlife, spent either in heaven or in hell, according to one’s behavior in this life? It’s a complex story, but in brief: the Persians had long believed in an afterlife involving eternal rewards and punishments. Starting in the 6th c. BCE, when the Persians conquered Babylon and allowed Jewish exiles to return to Jerusalem and rebuild the Temple, so-called Second Temple Judaism began to flourish, under Persian hegemony. Significantly, it also began to come into contact with Persian ideas.

But it was not until after the Persians were in turn conquered by Alexander the Great, a couple of centuries later (4th c. BCE) that this notion of eternal rewards or punishments in an afterlife became widespread in Jewish thought. And this is no accident. The Hellenistic dynasty established by Alexander’sSeleucid successors in Syria-Palestine had, by the 2nd c. BCE, become extremely oppressive. One can read in the Books of the Maccabees (e.g., 2 Macc. 6:18–17:42) how, under a Seleucid policy of forced Hellenization, Jews were being persecuted and even killed for clinging to their ancient faith, while many who renounced Judaism and collaborated were richly rewarded.

Under Seleucid persecution, it thus seemed to many faithful Jews that the Deuteronomic script had been flipped. Clearly, it was now the unrighteous who prospered in this life, while the faithful suffered, precisely because they had remained faithful to the covenant. It is at this point that the (originally Persian) notion that one gets one’s just desserts only in an eternal afterlife began to become firmly rooted in Jewish thought. We see this most clearly in the book of Daniel (12:1-3), which most scholars agree is among the last books of Hebrew scripture to have been written. Its final composition is now usually dated to the reign of that most exceptionally ruthless persecutor of Judaism, the Seleucid ruler Antiochus IV Epiphanes, a bare century and a half before the time of Jesus, and just before the Maccabean revolt which successfully drove out the Seleucids.

Even so, some remained unconvinced. Prominent among these were the Sadducees, a party consisting largely of wealthy absentee landowners with close ties to the Jerusalem temple establishment (as well as a relatively cozy relationship with the latest in a long line of imperial overlords, the Romans). The Sadducees were theological conservatives; they found nothing at all in Torah that might support the newly popular afterlife doctrines, and thus looked upon these at best with suspicion. Besides, it was quite convenient for them to regard their own relative wealth and privilege as signs of divine blessing, and in general to assume that it was in the here and now that people received their just desserts.

Another strain of explicit skepticism regarding afterlife doctrines can be found in the Hebrew scriptures’ wisdom literature— especially in the book of Ecclesiastes(or Qoheleth). Its skepticism is more philosophically grounded (and more radical) than that of the Sadduccees. Like the book of Job, it dares to question whether every evil (or good) that befalls a person in this life is a direct reflection of divine justice. But it is equally skeptical regarding the afterlife:  “…For the fate of humans and the fate of animals is the same; as one dies, so dies the other.…All go to one place; all are from the dust, and all turn to dust again. Who knows whether the human spirit goes upward and the spirit of animals goes downward to the earth?” (Eccl. 3:16–22).

As things turned out historically, such skepticism remains a distinctly minority report. The only parties within late-second-temple Judaism to survive the brutal Roman repression following the Jewish revolts of the first two centuries of the Common Era were (a) (Proto-)Rabbinic Judaism and (b) the messianic movement that eventually developed into Christianity. Both espoused apocalyptic doctrines of a resurrection, whether to eternal bliss or eternal damnation (as ultimately did Islam).

Many people who are attracted by these Abrahamic religious traditions still find it troubling that their morality should necessarily be underpinned by the threat of an afterlife of eternal torture as a recompense for wrongdoing (or even for belonging to the wrong religious tradition, or to none at all). If you are among them — whether or not you consider yourself a believer — you might take some comfort in the fact that the Scriptures of these faiths are not necessarily unanimous in affirming this idea.

We have here looked glancingly at some of the evidence for this in Hebrew scripture and tradition. In a sequel to this piece, we will examine some surprising evidence that the gospel of Mark (by most accounts the first gospel to be written) expresses what might likewise be characterized as an ambiguously nuanced view of the afterlife — one in which Jesus, when responding to queries regarding eternal life, resolutely shifts the focus back onto this-worldly matters of community and social justice.  (Please stay tuned.)

Previous VIDEO: Love & Loneliness in the Pandemic Coffee Talk
Next  The Bible, the Fetus, and Abortion

[…] a previous piece, I sketched the historical developments that led to the surprisingly late introduction into Jewish […]