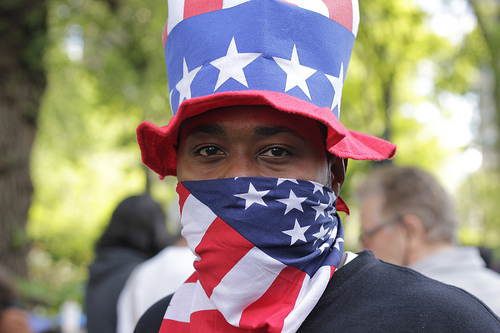 That time I got roofied at the (political) party

Recently a group of Christian pastors decided to challenge 50-year-old legislation that threatens the tax status of churches if they endorse a particular candidate. Pastors preached sermons specifically endorsing candidates that they felt embodied “Christian” ethics.

It may come as no surprise to many that these sermons endorsed the Republican Party. Clergy waxed poetically in sermons that were hardline conservative. Listening to them was the auditory equivalent of seeing junior highers in their first slow dance, except the dancers were not young teens, they were the cross and the flag. This awkward mingling is not new, and it goes all the way back to the founding of the United States.

As a public school student I learned the basic subjects: math, science, history, English etc. and I never doubted the version of events I was being told. Over the last five years or so I have been shaken from the belief that history is the study of objective events. In fact, I often find it helpful to ask “whose history are we learning,” because there are numerous histories floating around.

The more I watch political debates and campaigns, the more I fear for my fundamentalist and evangelical friends. I recently watched a special on a local Spokane network called God Bless America. It was a “news” special about the so called Christian heritage of America and the moral imperative of voters to preserve that heritage or court God’s judgment. This special described Christopher Columbus and the people who “settled” the U.S. not as conquerors and colonizers, but as evangelists. It went on to play a highlight reel of speech excerpts by Ronald Regan quoting the Bible left and right.

It was during the 1970’s that conservative Christians, notably Francis Chafer and Jerry Falwell, began to see the political process as a means to achieve their particular social ends; namely overturning Roe v. Wade and preserving “traditional marriage.” The opportunistic Republican party began to realize that this block of potential voters could have great power. In the 1980’s folks like Regan promised everything to these groups, but the return on those promises never materialized and as a result the so-called Religious Right (who probably see the term “right” as more of a moral standing, than a statement about a relationship to center) has become a bit of a caricature fronted by Pat Robertson amongst others.

At this point, I think it’s helpful to ask the question: who’s history are we talking about?

I would argue that we are talking about the history of white, heterosexual, men of privilege that have spun a version of history that paints them as heroes and harbingers of peace and prosperity for the whole world. The history in inconvenient and difficult but must be addressed.

It’s not hard to see that whatever religious smoke screen was used to colonize North America, there are economic incentives as well. Christianity, which is still heavily entrenched with Western culture, was not used to genuinely improve the souls of Native Americans, it was a tool of cultural colonialism. Nowhere does Jesus preach a sermon where he says, “and when you cannot convert or take land from people, give them a blanket saturated with a  lethal disease that will decimate their population.” Jesus does not go on to say, “if you’re going to have a slave make sure that you treat them like property, serially rape them, and go out of your way to prevent them from receiving education.”

The myth of a Christian nation is just that — it’s a myth. What saddens me is that politicians and pastors play on religious sensibilities  and use language like, “don’t vote your conscience, vote the Bible” to sucker people in to promoting agendas that only serve to bolster the status of the existing power base of both Christianity and Western culture, specifically white, heterosexual, men.

Not only do they use a dishonest reading of the scriptures, one that fails to acknowledge inconsistencies of interpretation:

When was the last time an evangelical pastor greeted someone with a holy kiss, or berated the fashion industry for insisting on making clothing from blended fabrics, or ranted about the injustices of the seafood industry?

But they are also putting blind faith in a particular political party that is using two particular issues to blind people from other important issues of our day.

My fear is that many people feel deep down that they love their gay brothers and sisters, and know someone that has had an abortion and their heart is telling them to be loving and accepting, but clergy and politicians are using religious guilt and shame to control them.

My fear is that religious systems that try to divide the incredibly beautiful and complex world that God has created into stale categories of black and white are trying to push agendas that are not in the interest of furthering God’s love and acceptance, but are actually in the service of lining the pockets of the privileged and powerful in our culture.

Important issues like healthcare and welfare are secondary to promoting homophobic and misogynist agendas that are not biblical or the best for our world. I do not see Jesus, Paul, or other Bible writers advocating for a strong military, or for international superiority. I actually see them preaching a kingdom that includes diversity and yet transcends differences and has room in it for everyone. It is a place that seeks to serve the “least of these.” It is a place where the quality of culture is determined by its ability to care for the poor, the widows, the orphans, and the aliens (try and square that with immigration policy!), and it is a beautiful place.

There’s an old, old tale about a group of people who have been saved from a tragic flood. The God of these people tells them to fill the earth: they are supposed to go discover, explore and wonder about the world and enjoy its rich diversity. Despite this command, this group of people decide to build a small mono-cultural compound with a large tower. The God of this group sees them and decides that a mono-culture is disastrous (you can see the potential evil of such a community in Nazi Germany). The God decides to liberate these people from their self made prison by giving them different languages so that they will go and discover the good earth that the God had created.

I think the beauty of democracy is the discussion. It is diverse and there should be and needs to be room in the discussion for absolutely everyone. I believe that the discussion is so important to the God of the Bible, that He has invited humanity into a discussion with himself. The discussion is not blind or black and white. It is complex and diverse, and it is the complexity and diversity in it that makes it beautiful and meaningful.

Perhaps this piece is too late, or is just more noise in the political shouting match, but these are some reflections on my hopes for my friends.