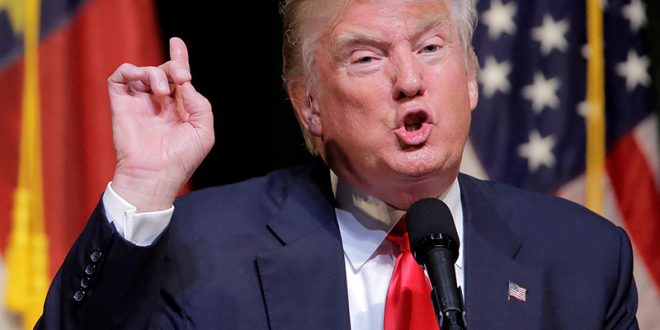 Republican U.S. presidential candidate Donald Trump speaks at a campaign rally in Raleigh, North Carolina, U.S., on July 5, 2016. Photo courtesy of REUTERS/Joshua Roberts *Editors: This photo may only be republished with RNS-TRUMP-STAR, originally transmitted on July 7, 2016.

The presumptive Republican presidential nominee has faced days of pointed criticism for a Twitter attack on Hillary Clinton that used an image that looked like the Star of David and appeared to deploy anti-Semitic stereotypes.

But Trump is having none of it, and in an impassioned speech on Wednesday night (July 6) he criticized his staff for deleting the tweet shortly after it went online last Saturday, saying it was “just a star” and those who saw anything else were “racially profiling.”

“Y’know they took the star down,” Trump declared in a rambling address at a campaign rally in Cincinnati. “I said, ‘Too bad, you should have left it up.’ I would have rather defended it, just leave it up, and say, ‘No, that’s not a Star of David. That’s just a star!’”

Shortly afterward, Trump was at it again, tweeting an image of a Disney product for the hit animated children’s movie “Frozen” that also featured a six-pointed red star like the one he used in his anti-Clinton tweet — implying that the image was an innocent one.

“Where is the outrage for this Disney book? Is this the ‘Star of David’ also? Dishonest media!” he wrote.

Where is the outrage for this Disney book? Is this the ‘Star of David’ also?
Dishonest media! #Frozen pic.twitter.com/4LJBpSm8xa

The original tweet from Saturday featured a photo of Hillary Clinton against the backdrop of a cascade of cash with a red six-pointed star pronouncing her the “most corrupt candidate ever.”

The use of the Star of David in that context immediately called to mind classic anti-Semitic tropes for many, and Trump’s troubles were compounded when it turned out that the star image had apparently been circulating earlier on white supremacist websites.

Trump’s campaign then deleted the image and replaced it with one that turned the star into a red circle.

That Trump would then return to the issue, and defend the original tweet, confounded many Republicans who have been calling for the candidate to become more disciplined in his campaigning and to start focusing on defeating Clinton, the certain Democratic nominee, and stop picking fights with the media.

“I wish he would bring the same firmness to his rejection of anti-Semites and racists as he brings to members of the media and other candidates,” Anti-Defamation League CEO Jonathan Greenblatt told BuzzFeed News. “I don’t understand why he’s courting the white nationalist vote, I’m not in politics.”

Previous Independence has its limits
Next Ask A Religious Scientist: What is a Course in Miracles?