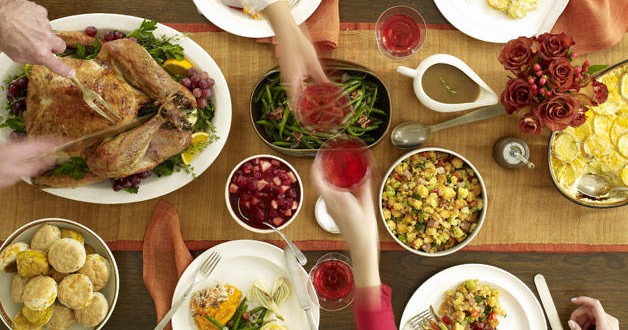 We all know the story of the First Thanksgiving — or at least the version many of us acted out in second grade, when some kids dressed up as Pilgrims and some as Native Americans, and then everybody put aside their differences to sit down together and commence overeating.

That narrative has been rightly complicated in recent years, as Americans recognize the arrival of English colonists in the early 17th century accelerated the genocide of Indigenous Americans, who had already begun to suffer disease and death from their earlier contact with Europeans. The English transplants may have been giving thanks back in 1621, but not everyone around them did.

When we tell the story of that mythical and historically problematic First Thanksgiving, we often omit an important part of the story, which is that those Pilgrims were on the brink of starvation.

(Incidentally, we kind of made up the part about the Pilgrims, or “Saints” as they preferred to call themselves, coming here primarily for religious freedom. They actually already enjoyed that privilege in Holland, which is where many of them had been living, having already fled England years before. However, they wanted to rule their own roosts, and they didn’t want their children to be raised Dutch. Also, only about a third of the roughly 100 people in that original group were even religious separatists at all. The rest weren’t Pilgrims but ordinary folks who were basically looking for greener economic pastures, like the majority of immigrants throughout history.)

At any rate, if “more abundant economic opportunity” was on the list of promises from the private company that funded the Pilgrims’ venture, they were sold a false bill of goods. It didn’t help that they headed to the wrong place. They had aimed for somewhere north of Virginia, which was already chartered, but were blown wildly off course and wound up in a much colder place we now know as Massachusetts. They arrived just before the start of winter and had not exactly brought their parkas.

I’ve been thinking about that this week as we prepare to hold Thanksgiving in the context of a global pandemic that has already claimed more than a quarter of a million American lives. A fair number of us have wondered aloud what there is to celebrate right now, when things seem bleak. Last week, for example, my church, the Church of Jesus Christ of Latter-day Saints, encouraged members to express gratitude every day this week on social media using the hashtag #givethanks. I’ve been surprised, and then not surprised, by the backlash generated over this seemingly innocuous gesture.

Is it possible to give thanks when people are dying? Is it right to?

The short answer is yes. In fact, I’d say it’s more important now than ever.

This isn’t the time to cancel Thanksgiving (though of course we should keep it responsibly — wearing masks, avoiding unnecessary travel and not giving the virus to Grandma as an early Christmas present). Thanksgiving has always been a holy-day that is about finding light and goodness in the midst of darkness.

Gratitude researcher Robert Emmons, author of “Gratitude Works! A 21-Day Program for Creating Emotional Prosperity,” says some historical context is necessary for us to understand the importance of gratitude in general and the holiday of Thanksgiving in particular.

It’s not just that the first Thanksgiving meal happened after half the Pilgrims had been wiped out. It’s also that Thanksgiving used to be a regional New England observance, something people only did in places like Massachusetts and Connecticut where the Reformed/Pilgrim/Puritan/Congregational heritage was strong. In that tradition, Christians used to hold “thanksgiving” feast days on random Thursdays on an ad hoc basis when they felt the need to thank God for their health and safety, as well as fast days on other random Thursdays when they were anxious about those things and wanted to pray communally for God’s protection. (Those fasting times were also called “days of humiliation,” which may help to explain why they did not catch on as much as the feast days.)

It took more than a century for Thanksgiving to be named as an official national holiday, which happened in 1863, right in the middle of the Civil War. The timing was no accident: In the midst of widespread suffering and the worst national division our country has ever endured, President Abraham Lincoln was actively seeking ways to unite America. Initiating a new national holiday seemed just the ticket. But even then it took another 70-plus years to gain steam around the country, especially in the South. Thanksgiving only achieved full national prominence during the Great Depression in the 1930s.

Do you see a pattern here?

Thanksgiving was born amid disease and death, advanced amid war and death, and canonized amid poverty and death.

And that tells us something important about what we really mean when we #givethanks. We are most likely to emphasize real gratitude when we have either just lost everything or fear we are about to. All those clichés about how you never fully appreciate what you have until you lose it turn out to be true.

So this Thanksgiving, I’ll be celebrating the joy of life while also reflecting on its transience and the terrible losses 2020 has dealt so many people in our country and around the world.

Marking both grief and gratitude isn’t antithetical to the Thanksgiving holiday; in fact, it’s baked into its very history.

Jana Riess is the author of “The Twible: All the Chapters of the Bible in 140 Characters or Less . . . Now with 68% More Humor!” and “Flunking Sainthood: A Year of Breaking the Sabbath, Forgetting to Pray, and Still Loving My Neighbor.” She has a Ph.D. in American religious history from Columbia University.