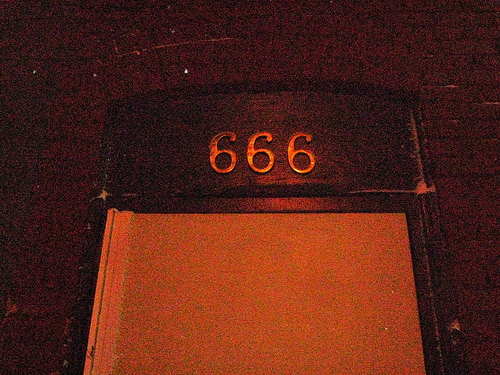 Walter Slonopas, a 52-year-old maintenance worker from Clarksville, Tenn., quit his job with Contech Casting LLC last week when he received a W-2 form bearing the number “666,” the Biblical mark of the beast mentioned in Revelation, the Tennessean reported Thursday.

“Slonopas said that after getting the W-2, he could either go to work or go to hell,” the Tennessean reported.

“If you accept that number, you sell your soul to the devil,” he told the paper.

“I explained to them, I can't accept this number. I am a Christian. They said, we cannot change it because it is computer generated,” he told the Christian Post.

This isn't the first time Slonopas encountered the number at work.

When he first started working at Contech in April 2011, he was supposed to have been issued the number 668 to use when he clocked in.

Instead, he was issued 666.  After complaining, he was given another number.

In July 2011, the time clock system was changed and he ended up getting 666 — again.  He quit the job, but returned a few days later after the company apologized.

Bob LaCourciere, vice president of sales and marketing for the Revstone Corp., the parent company of Contech, said he was “completely at a loss for words.”

The number comes from Revelation 13:18.

The passage has been interpreted a number of ways by many people, but the number makes some Christians extremely uncomfortable and is something to be avoided.

According to LaCourciere, the company would “love” to have Slonopas back, and they plan to mail him a new form.  ABC News said the company has also banned the use of the number.

Slonopas, however, said no one from the company has called him.

“I'm not going to start my tax return until I get a new form. For me, it feels like I'm accepting money from the devil,” he said.

Moreover, Slonopas isn't certain he wants to return to Contech, as that would send a message that he sold out his faith for money, Bob Smietana wrote at the Tennessean.

“God is worth more than money,” Slonopas said.

The Christian Post said that his Christian faith “was heavily influenced by his mother and grandmother who became Christians while they were imprisoned in Nazi concentration camps in Poland.”

“When you come to a situation where nobody can help you, when the only choice you have is to believe in God and hope or get angry with God and have nothing,” he said.

No matter how things turn out, the couple isn't worried and says God will take care of them.