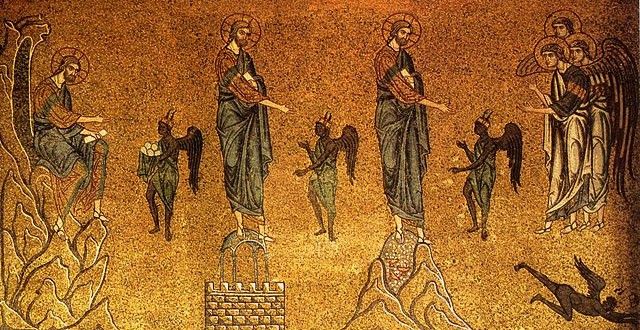 Jesus goes out into the wilderness for a fast of 40 days echoing the 40 years in the wilderness by the nation of Israel. There the devil tempts him three times. First, the devil temps Jesus into proving Jesus is the son of God by making bread supernaturally appear from rocks to feed himself. Next, he tempts Jesus with all authority to be the king if Jesus bows to the devil. Finally, the devil tempts Jesus by daring Jesus to go to the Jerusalem and tempt death by throwing himself off the temple’s wall only to have God’s angels raise him up before being smashed on the rocks. Jesus rejects all these temptations. Yet, the mystery remains as to what the nature of the temptations really are.

Why does Jesus’ rejection remain a mystery? Because not long after this temptation, Jesus does produce, supernaturally, bread for the feeding of the 5,000. In the Great Commission, Jesus says all authority has been granted him as he is with us to the end of age. And Jesus does go to Jerusalem to be humiliated on a cross and die a horrible death only to have the angels raise him in the Easter event. In other words, the three temptations. So, the temptation could not be about bread, authority or being raised up by the angels. What then?

In each of the temptation, Jesus is challenged in his personhood to either prove himself or to abandon his identity in worshiping God. In other words, in the devil attempts Jesus to abandon love. It as if the devil is saying, “Do what you are going to do, but do it for yourself and your own glory and not others.” Jesus rejects this and upholds the biblical idea of steadfast love. He feeds the 5,000 out of compassion. Authority means his being with us until the end of the age. And he love us. He dies on the cross and rises so that we too can find life in loving God and loving others. Jesus’ message in a culture that tempts us to thinking only about No. 1 and to work for our own greed as the engine of our capitalism or as the underling of an abundant life, remains counter-cultural. Jesus’ resistance toward this selfishness that banishes love was strong in the wilderness and stays strong in the face of those that would mislead us into being self indulgent. The truth of love stays the rock of the church.