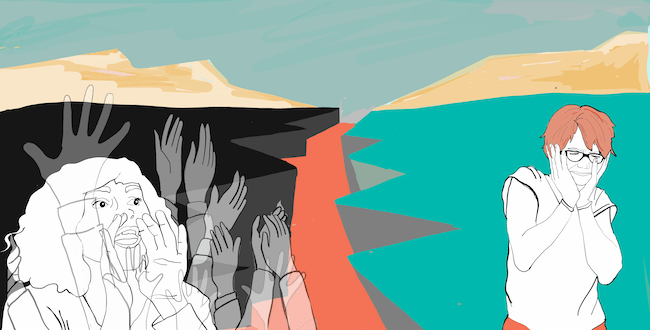 Telling My Cult Story Is How I’ve Found Spiritual Healing

Telling My Cult Story Is How I’ve Found Spiritual Healing

I used to keep my story close.

I feared what my mom would think if I told anyone she’s in a cult.

It’s offensive to be called a cult member; it’s embarrassing. No one who is in a cult, realizes they are.

So, I told people my mom and stepdad were in a ‘house church’ and were ‘super conservative’ and left it at that. And I definitely didn’t tell my mom what I really thought.

I did, however, tell her I didn’t agree with their “apostle.”

My mom couldn’t look at me the same after that, and she could hardly talk to me. You’d think I’d told her I was unwed, pregnant, and on the run for murder.

And in a way, I was on the run. I couldn’t be free of their faith unless I fled my hometown.

I ran straight into the arms of an Evangelical youth group on my college campus. Evangelicalism was the gateway to hell through the eyes of the ‘house church.’

I’m far from Evangelical today, but that church was there for me at just the right time.

My aunt, who might fall in the “spiritual but not religious” category jokes with me that not only are we on the bus to hell, we’re driving it.

We laugh and roll our eyes now, but there’s a lot of hurt behind it.

The journey I’ve had with my mom is raw and tangled, and far too short.

We were not a good pair. She was wounded and I was angry and we brought out the worst in each other.

Both of our afflictions came from the same place – my dad.

He left and broke her heart. He left and set mine on fire. She shut down. I punched walls.

When the apostle found her, she found a BandAid. But my fury grew.

By the time I was in college my mom and I could hardly speak.

I wanted to talk about my journalism internships; the story I wrote for the paper, the religion news writing conference I was going to, but all that mattered to her was the apostle.

The “BandAid” she discovered had become a chain.

I got my first job and moved to South Texas; she still wouldn’t read my stories because I was writing about religion and that was bad.

My anger had bubbled.

I moved two times after that for better gigs. Our conversations became less frequent but more heated.

Only to close friends would I tell the truth about my religious upbringing and the group my mom was involved in.

It wasn’t until I moved to Spokane, 10 years ago now, that my mom cut ties with me and I began to feel the freedom to tell my story.

It didn’t matter what she thought of my truth anymore, she had shut the door to me.

Before I shared my story though, I needed to shed the wrath that after many years had become so strong. One shouldn’t write from a place of anger. I needed to soften the explosives if I wanted anyone to hear me.

It wasn’t easy finding a counselor who understood spiritual abuse, but eventually I did. She helped me learn that, at the time, I had lived most of my life with a toxic doctrine being pumped into me. I needed to get that poison out of me – my whole being – by replacing it with something curative.

There were two poisons to deal with; one being the cult’s doctrine. Although intellectually I knew better than to believe its theology, the manipulative and shameful messages still haunted me. I had to unlearn everything I had been taught.

My mother was the second poison.

Like an addict, she was so full of the apostle’s drug she wasn’t my mother anymore. She was a soldier in his army; brainwashed.

I wanted to fight for her, try to convince her to stay in my life. But in time, I realized that without our constant clashes, without her continual berating, my anger was fading.

It’s been years since we’ve talked, and I don’t throw phones or punch holes in walls anymore. The outrage is gone.

I had to let her go.

For me, overcoming spiritual abuse is sharing my experience with others. It’s talking about it, writing about it. It took years, decades even, to be able to do so from a place of compassion and empathy.

I know every time I publish something about this, my chances of reconciling with my mom become slimmer. But I also know I become stronger with each keystroke.

Previous From ‘Hater’ to Lover of Souls: My Journey Out of a Narrow Christian Sect
Next The Eagle on the Cross

[…] On the topic she wrote, “Telling My Cult Story Is How I’ve Found Spiritual Healing“ […]

Do you care about religion reporting in Spokane? Consider a donation - SpokaneFāVS

[…] grown up in a cult, I was hungry to learn about the values that shaped my neighbors. I always knew the religion I […]

[…] chose FaVS after reading about the organization and looking into Tracy Simmons’s background in growing up in a cult. The thought of reporting about cults enthralled her and she has researched about cults in the […]