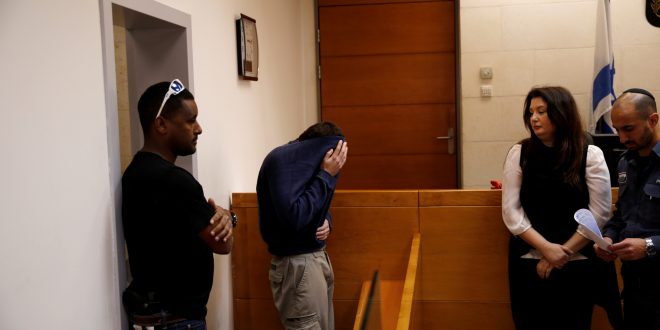 U.S.-Israeli teen (2ndL) arrested in Israel on suspicion of making bomb threats against Jewish community centres in the United States, Australia and New Zealand over the past three months, is seen before the start of a remand hearing at Magistrate's Court in Rishon Lezion, Israel March 23, 2017. REUTERS/Baz Ratner

JERUSALEM (Reuters) – A man was arrested in Israel on Thursday on suspicion of making dozens of hoax bomb threats against Jewish community centers in the United States, Australia and New Zealand over the past three months, police said on Thursday.

Sources familiar with the case gave the suspect’s age as 19 and said he is Jewish and holds Israeli and U.S. citizenship. A police spokesman said the suspect’s motives were still unclear to investigators.

U.S. federal authorities have been investigating a surge of threats against Jewish organizations, including more than 100 bomb threats in separate waves over the past three months against Jewish community centers (JCCs) in dozens of states.

The incidents have stoked fears of a resurgence in anti-Semitism and forced the evacuation of many centers, including some with day care for young children.

In the United States, a former journalist was charged in St. Louis on March 3 with using fake email accounts to threaten to bomb Jewish sites while posing as his ex-girlfriend. But he was not believed to be responsible for the majority of threats.

Israeli police said FBI agents participated in the probe in Israel that led to Thursday’s arrest. The suspect, who was not immediately identified, was taken to a court in central Israel for a remand hearing.

“We believe he is responsible for the wave of calls, bomb threats, made to Jewish community centers in the United States,” the police spokesman said, naming Australia and New Zealand as other countries he allegedly targeted.

He said the suspect, whose home was searched on Thursday, began making the calls three months ago, using advanced masking technologies.