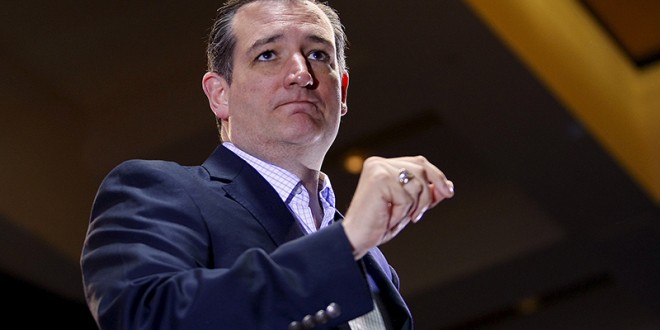 “Over the next two weeks, with the support of your prayers and the impact of your preaching, I intend to lead an effort to end taxpayer support of Planned Parenthood,” he wrote in an email to 100,000 pastors and others sympathetic to the conservative cause, many of them evangelical.

“The battle we face is not political. It is spiritual,” his email to the pastors continues. “To enter this arena in a prayerless condition invites failure.”

Some, however, see the campaign against Planned Parenthood as a way for Cruz to distinguish himself in a primary crowded with conservative Republicans and, more critically, capture the evangelical base away from other contenders.

Planned Parenthood, the national women’s health organization that provides a gamut of services, including abortion, has come under fire after the release of videos made by an anti-abortion activist that accuse the organization of illegally harvesting organs and profiting from their sale. Planned Parenthood says the allegation is not true.

Cruz, a Southern Baptist and son of a preacher who declared his candidacy on March 23 at evangelical Liberty University, has made religious liberty a central plank of his platform.

The Texan, often sounding like a preacher himself, has told audiences of conservative Christians that their biblical values are under attack in America today.

On his campaign to defund Planned Parenthood, Cruz is working with the American Renewal Project, a conservative group that encourages pastors to run for elected office.

“Our call to action primarily, number one, is to get the pastors to return to prayer on this and every issue,” said the Rev. Ken Graves, who spoke on Tuesday’s teleconference call.

Too many of of the nation’s evangelical pastors “have come to believe that we have no freedom, no right to speak,” said Graves, senior pastor at Calvary Chapel in Bangor, Maine, and a speaker on the 20-minute call. He encouraged his fellow pastors  to exercise their right to talk about Planned Parenthood and other issues according to their understanding of Scripture.

But the Rev. Barry Lynn, executive director of Americans United for Separation of Church and State, said Cruz’s assertion that his work with the pastors is not political “does not pass the laugh test” and the senator could be leading the preachers into dangerous legal territory.

“To the extent that he is suggesting that churches engage in efforts that happen to coincide with his political platform, there is the risk of luring them into violations of the tax law, which prohibits endorsement of political candidates,” Lynn said. “It certainly sounds like he is encouraging them to simply violate the tax code and hope they get away with it.”

And Graves said the pastors stand on firm legal ground. “The word is out that pastors have the freedom, that they’re not a lower caste of American people,” he said. They can both speak out and engage in the process.”

Previous Still waiting for help: the lessons of Hurricane Katrina on poverty
Next Ask A Catholic: Is There Really a Purgatory?