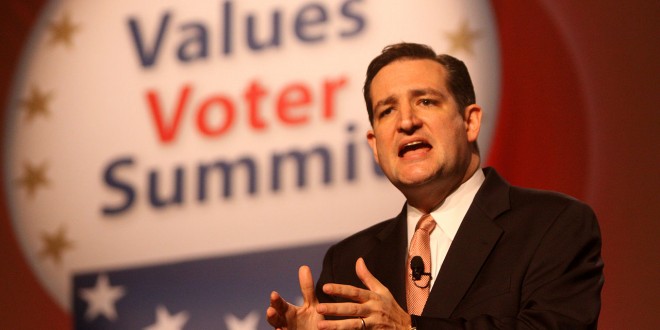 (RNS) After he said “Christians have no greater ally than Israel,” Sen. Ted Cruz, R-Texas, was heckled off the stage at a Wednesday night (Sept. 10) gala to raise awareness of beleaguered Mideast Christians.

Cruz, the keynote speaker at the Washington, D.C., dinner, sponsored by In Defense of Christians, a new organization spearheaded by Catholic and Orthodox Christians, prompted boos and cries of “stop it!” and “enough” and “no!” as an increasingly louder crowd told him to get off the stage.

The incident, first reported by the online news organization The Daily Caller, was captured on video by EWTN, the Catholic television network. The video shows that Cruz tried to continue speaking, but many in the audience, in a hotel ballroom, expressed anger when he included Hamas in the list of militants out to destroy religious minorities in the Middle East.

The episode highlighted a central tension between U.S. evangelicals, who strongly support Israel, and Middle Eastern Christians — including thousands of Palestinian Christians — who hold Israel responsible for expropriated Arab lands and the death toll  in the Israeli-Palestinian conflict.

In Defense of Christians’ three-day inaugural summit ended on Thursday (Sept. 11) and brought together hundreds of Orthodox Christians from the Middle East and Europe, as well as many American Orthodox Christians, Catholics and evangelicals. On Wednesday morning the conference heard from Cardinal Donald Wuerl of Washington, D.C., as well as several Orthodox patriarchs before heading to Capitol Hill for a day of lobbying. Only one Wednesday morning speaker mentioned Israel, calling its conflict with the Palestinians the root of Middle Eastern chaos.

That view, IDC executive director Andrew Doran said at the time, is not the view of the IDC or likely many at the conference.

Wednesday night, IDC president Toufic Baaklini tried to quiet the crowd, but to little avail. After the incident he issued a statement decrying the outburst against Cruz.

“A few politically motivated opportunists chose to divide a room that for more than 48 hours sought unity in opposing the shared threat of genocide, faced not only by our Christian brothers and sisters, but our Jewish brothers and sisters and people of all other faiths and all people of good will.

“Tonight’s injection of politics when the focus should have been on unity and faith, momentarily played into the hands of a few who do not adhere to IDC’s principles,” the statement continued. “They were made no longer welcome.”

Previous Growing old, but keeping a childlike faith
Next Eco-Theology and the New Missiology