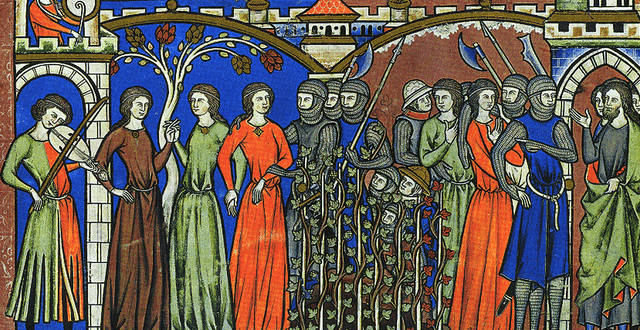 Teaching the Bible as Lit “with her hands on the threshold “

Teaching the Bible as Lit “with her hands on the threshold “

For years I taught the Bible as Literature. This used to be an English Department staple. It was thought that English majors should have some familiarity with the most widely-read and influential book in the Western literary tradition.

Partly with these latter students in mind, I often assigned as our first reading a portion of the Bible that they would not likely to have come across in Sunday School. I certainly didn’t. It was not until I read Phyllis Trible’s “Texts of Terror: Literary-Feminist Readings of Biblical Narratives” (1984) that I paid attention to the story that unfolds in Judges 19 of an unnamed woman who is gang raped. Besides making us think about violence against women in ancient cultures and in ours, Judges 19 also raises interpretive issues. Do we get the same meaning, the same values, from biblical texts as did their first audience?

I don’t have the space to do justice to all the intricacies of Judges 19. Readers are encouraged to ponder the full text as well as Phyllis Trible’s brilliant, compassionate commentary. The opening of Judges 19 provides an interpretive frame: “In those days, when there was no king in Israel….” — the narrator’s intention is to reveal the dire consequences of not having a monarch to unify the twelve tribes of Israel. We may or may not see this as the root source of the trouble ahead which begins when a “certain Levite” travels to retrieve his concubine who has fled back to her father’s home in Bethlehem (19.1-3). The father displays so much ancient hospitality that the Levite has difficulty leaving.  When he finally does he unwisely sets forth late in the day.  The concubine is never consulted; her wishes clearly do not matter.

The Levite decides to spend the night in Gibeah, a city of the Benjaminites, and camps in the city’s public square.  An old man who comes from the same region as the Levite warns him not to expose himself to the wicked Benjaminites and offers him the hospitality of his house (19.15-21).  While the Levite and his host are enjoying themselves, the wicked men pound on the door and demand that the host toss his guest out so that they may “know” him (19.22-23).  As in the better known story set in Sodom (Genesis 19), and as even now in some cultures, male rape is a weapon of war and a way to humiliate—what’s more humiliating to a man than to be treated  as a woman?

In order to uphold the custom of male-male hospitality, the host refuses to give the wicked men his guest, but says “Here are my virgin daughter and his concubine; let me bring them out now.  Ravish them and do whatever you want with them” (19.24). When the wicked men seemingly fail to listen, the Levite “seized his concubine, and put her out to them.  They wantonly raped her, and abused her all through the night until the morning” (19.25)

What do we think of this Levite? Does the narrator evoke empathy for the concubine? Can the details get any more appalling and vivid?    Yes: as morning appears, the woman falls down at the door out of which she had been thrown; when her master gets up to be on his way, “there was his concubine lying at the door of the house, with her hands on the threshold” (19.27).  Trible calls this a “touching detail’ (79), but thinks the narrator “cares little about the woman’s fate” (76).

Her fate is awful, ironic.  Her master throws her body over his donkey, takes her home, and carves her into twelve pieces (it is not clear whether or not she is dead when he does this). He sends her body parts throughout Israel to raise war against the Benjaminites, which results in more violence, more rape (Judges 20, 21).

Trible considers the unnamed concubine an unacknowledged type of another one from Bethlehem whose “body was broken and given to many” (64). She asserts, however, that to have empathy for this woman we must “interpret against the narrator, plot, other characters”(86). My students tended to agree: while they cared for the concubine, the narrator did not.  I wasn’t so sure.  I would hold up the haunting image of her hands on the threshold that, thanks to the narrator, might be at the door of our hearts when we study the Bible as literature.

Tags bible and empathy teaching the bible women and the bible

Previous A High Holidays Letter to Rabbis Trying To Meet Congregational Needs During The Pandemic
Next Can it be too early for Christmas?