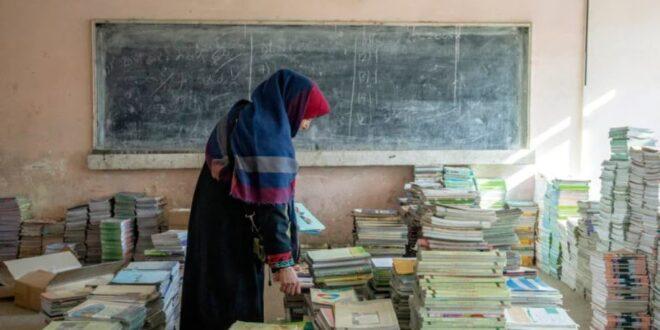 Amanah Nashenas, an Afghan teacher, collects books in a school in Kabul, Afghanistan, Dec. 22, 2022. The country’s Taliban rulers earlier this week ordered women nationwide to stop attending private and public universities effective immediately and until further notice. They have also banned girls from middle school and high school, barred women from most fields of employment and ordered them to wear head-to-toe clothing in public. Women are also banned from parks and gyms. (AP Photo/Ebrahim Noroozi)

Taliban Will Be the Losers for Denying Women an Education

Taliban Will Be the Losers for Denying Women an Education

The Prophet Muhammad called the pursuit of knowledge ‘obligatory for every Muslim.’

On Dec. 20, the Taliban government suspended higher education for women, marking another low for the Islamic Emirate of Afghanistan, as the government is officially known. Its leaders vacillated for more than a year about allowing girls to resume their education but has now dashed the hope, aspiration and ambition of millions of women in the country.

In 2021 when I visited Kabul as part of a Women’s Peace and Education delegation, the Taliban ministers we met offered hope by declaring that women would be given rights within an Islamic framework.

It has become clear since, however, that there are different views within the ruling party and that those willing to adhere to the true teachings of the Quran are fired or undermined by those who uphold the Taliban’s customary practices. The main casualties of that infighting so far have been girls and women.

This right to education, after all, is firmly grounded in the Quran, which obligates Muslims to pursue knowledge, think, read, wonder and enlighten themselves about their religion and world. The Quran holds people of knowledge in high esteem, saying, “Are those who know equal to those who do not know? None will be mindful of this except people of reason.” (Quran chapter 39, verse 9.)

The virtue of knowledge is amplified by Prophet Muhammad, who said the ink of a scholar is greater than the blood of a martyr, thus bestowing a degree of honor on teachers, writers and scholars. He encouraged Muslims to seek knowledge from the cradle to the grave. After the victory of Badr, in the year 624, he migrated to Medina, where he began a program to erase illiteracy among Muslims. He found that many prisoners of war, who were Meccans, were literate, and he made their release conditional: Each prisoner must teach 10 Muslims how to read and write.

The Prophet didn’t exempt female education. He called the pursuit of knowledge “obligatory for every Muslim“ and said, ”the best of you is one who gives a good education to his children.“

The Taliban wrongly claim that their rulings are based on the Quran and under the six objectives of Shariah, which include the protection and pursuit of religion, life, the intellect, the family, property and human dignity. Education is a key aim of the protection and promotion of intellect, which ensures girls the right to pursue spiritual and universal knowledge by receiving a basic and advanced education.

The Taliban’s move drew criticism from other Muslim officials. Qatar, a Muslim emirate where women enjoy all due rights, particularly education, issued a statement expressing deep concern and disappointment over the suspension of women’s education, emphasizing that these negative practices will seriously impact human rights and the economy.

In Turkey, another Muslim-majority neighbor, national security director Ibrahim Kalin tweeted: “This decision is against the spirit of Islam, and this prohibition has no place in Islam.”

The Taliban may go down in history for driving out forces occupying Afghanistan, but it’s as likely they will be losers in the eyes of God.

The Quran warns: “Losers are those who murdered their own children foolishly out of ignorance and have forbidden what God has provided for them, falsely attributing it to God. They have certainly strayed and are not rightly guided.” Mothers are integral to children’s social development and society, as mothers are the earliest transmitters of knowledge. Promoting ignorance among them “slays” children.

The Taliban’s repulsive treatment of women, denying them the rights enshrined in the Quran, snubs 1,400 years of the history of Muslim women being held up as intellectual luminaries. They are denying the legacy of Khadijah, the entrepreneur who financed the Prophet’s mission, and Fatima Al-Fihri, who established a mosque that developed into Al-Qarawiyyin University in Morocco, recognized as the oldest continuously operating university in the world.

Men and women who care must unite globally to communicate to the Taliban that every girl has the right to achieve her intellectual potential to contribute to the betterment of her family, community and society. They must activate all human resources, most notably highly skilled and accomplished women, to create an equal and just society.

Previous Ask an Eastern Orthodox Christian: Can One Find Joy in this Life?
Next Though Not Discussed Often, Guns Remain a Top Issue for Spokane Bishop, Priests