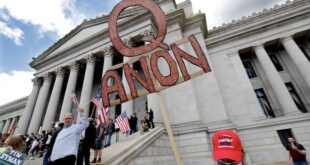 A new survey reports more than a quarter of white evangelical Protestants believe a QAnon conspiracy theory that purports former President Donald Trump is secretly battling a cabal of pedophile Democrats, and roughly half express support for the debunked claim that antifa was responsible for the recent insurrection at the U.S. Capitol.

END_OF_DOCUMENT_TOKEN_TO_BE_REPLACED

An Evangelical’s Guide To QAnon: Inside One Of The Most Talked About Internet Groups

If QAnon was a cult run by people intentionally trying to deceive new followers (which I don’t believe it is, for the most part) my critique for its leaders would be that they’re trying too hard.