At 77, Pope Francis keeps a busy pace, and aides keep their fingers crossed

VATICAN CITY (RNS) Church leaders welcome the reforms and fresh air that Pope Francis is bringing to an often dysfunctional institution. But at 77, they just want him to have the stamina to keep it up.

END_OF_DOCUMENT_TOKEN_TO_BE_REPLACED

VATICAN CITY (RNS) When Pope Benedict XVI officially left the Vatican in a helicopter a year ago this week (Feb. 28), becoming the first pontiff in 600 years to resign, many in his conservative fan base were aghast, even angry. He has betrayed us, said those who thought Benedict’s papacy would be the final triumph […]

END_OF_DOCUMENT_TOKEN_TO_BE_REPLACED

“You are not a royal court,” the pontiff tells more than 100 scarlet-clad “princes of the church” arrayed before him in St. Peter’s Basilica.

END_OF_DOCUMENT_TOKEN_TO_BE_REPLACED 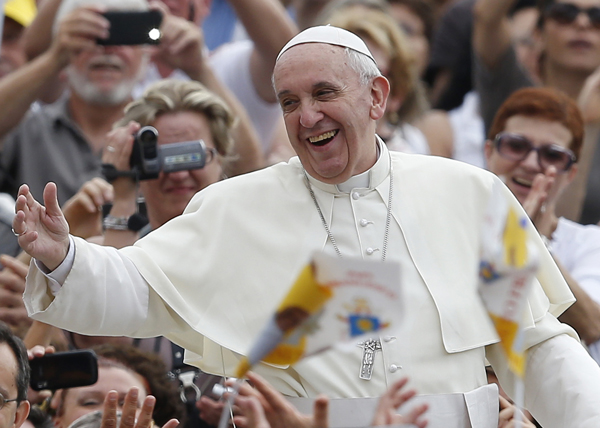 (RNS) He’s Time magazine’s Person of the Year, the most talked about topic on Facebook and the most popular baby namesake in Italy. No surprise, Pope Francis is also the top Religion Story of the Year and the Religion Newsmaker of the Year, according to a poll of Religion Newswriters members.

END_OF_DOCUMENT_TOKEN_TO_BE_REPLACED

Vatican to display bones of St. Peter for the first time

ROME (RNS) The Vatican said it would display for the first time bones believed to be the mortal remains of St. Peter, the leader of Jesus’ 12 apostles, to mark the end of the Year of Faith, Nov. 24.

END_OF_DOCUMENT_TOKEN_TO_BE_REPLACED

After years of decline, Catholics see rise in number of future priests

(RNS) Young men today “want to give their life for something that counts. These men are tired of living in a culture of relativism. They want to say there must be something true, beautiful and good," says the Rev. Mark Latcovich, president of St. Mary Seminary outside Cleveland.

The post After years of decline, Catholics see rise in number of future priests appeared first on Religion News Service.