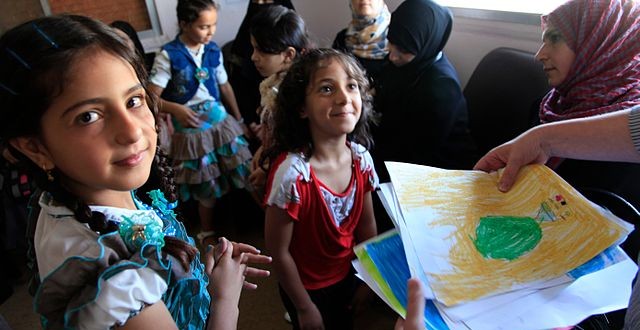 Refugee children from Syria at a clinic in Ramtha, northern Jordan/Wikipedia photo by UK Department for International Development

The refugee crisis is spreading across Europe like a plague. The most upsetting piece of this issue, is that this plague may be almost incurable. Because it presents the nations of the EU with answering the question that has garnered no right answers for generations. How do you decide how many and who gets to be an immigrant to your country? The answer to this question is not going to present itself through a flippant, ‘let everyone in’, sentiment. However, what worries me, is that the sentiment that has been reached for in the wake of this crisis, has been one from the far opposite of acceptance and compassion. It smells like sewer that has been laying out in the sun, baking with the pain and disgust thrown at these immigrants bold enough to seek a safer and more stable life. This smell is wafting through the air, and it wreaks of xenophobia, ignorance, hatred and religious intolerance. But I am quickly realizing that this smell isn’t just from remnants of something that was once there. It is fully present and many are determined to make sure it stays around to belittle, stereotype and ostracize any immigrants that seek refuge from their home land.

Now, there are economists across the board that would laboriously sit and inform me of the issues that arise with mass immigration. However, the economic standpoints are not what I have witnessed being most debated. Rather, it is this overwhelming and dangerous fear of Muslim people entering European nations and America that has seemed to overtake this whole human rights discussion. But I wonder, after some of the comments and bigotry that has been displayed throughout this crisis, if for some people, this exodus of people doesn’t stand as a ‘human rights issue’, because for they have a hard time seeing these refugees as human beings.

If you take the emotional component out of the equation, logistically and statistically, the fears of first world citizens are still unjustified. In a report put out by Europol (European Law Enforcement Agency) in 2013, the numbers showed a very level result comparing Muslim extremist terrorism versus that of other groups. In 2013, there were 216 arrests made throughout the EU, in response to religious inspired terrorism, specifically Muslim extremist groups such as Al Qaeda, ISIL now known as ISIS and yes, Christian. That same year, 180 arrests were made in the EU in regards to Ethno Nationalist and Separatist terrorism. This includes the IRA (Irish Republican Army), RAAD (Republican Action Against Drugs) and ONH, whose acronym reflects the Gaelic words used for their title, which translates to Warriors of Ireland. Ethno Nationalist groups had a total of 36 less arrests than Muslim terrorist groups. That’s not even one-fourth more, in fact it’s one-fifth or .2 times more arrests, were not even speaking about terrorist attacks, than Muslim extremist groups. So the next question that has to be asked, is why the media has created an illusion that all Muslims are out to destroy and be destructive in the name of Allah?

“It’s a business decision. Stories about scary ‘others’ play better. It’s a story that can simply be framed as good versus evil with Americans being the good guy and the brown Muslim as the bad”, says journalist Dean Obidallah, in an article that goes in depth in breaking down the amount of Muslim terrorists versus others. The numbers make you want to start questioning the media you consume. Obidallah goes on to say that, “For example, in 2013, there were 152 terrorist attacks in Europe. Only two of them were “religiously motivated”, while 84 were predicated upon ethno-nationalist or separatist beliefs.” He used the same source I went to for my numbers — the European Law Enforcement Agency. Yet, not enough educated people seem to be garnering their information from the right sources. In all fairness, we can all fall into the trap of consuming what is given to us by the media outlets we choose. But if one is to be honest, this large amount of misinformation fed to us, is truly an outrage. And the refugee crisis that is currently occurring has been the best indicator of my point. The level of ignorance and intolerance by well-educated, well versed and many traveled, Americans and Europeans is not only disheartening, but embarrassing. The other piece of this issue is how much opposition toward the Muslim community is spawning…from the Christian one.  And I don’t understand how I, as a naïve, 20-year-old, who hasn’t lived a lot of life, can see the hypocrisy overflowing from those that preach Jesus’ teachings, while spitting in faces of those he would have absolutely called “brothers and sisters”? I don’t have the answers to much, but I do know that the wrong answer to what is going on at the borders of so many European countries and at our own, is seeing those that come from other countries as just that, other. They may be from a different place, but they are still human beings and they are not beneath us because of that fact.

Join SpokaneFAVS for a Coffee Talk forum on “The Refugee Crisis” at 10 a.m. Oct. 3 at Indaba Coffee, 1425 W Broadway.

When she’s not busy, she enjoys listening to music, movies, cooking and baking, eating sweets and coffee and hanging out with friends.