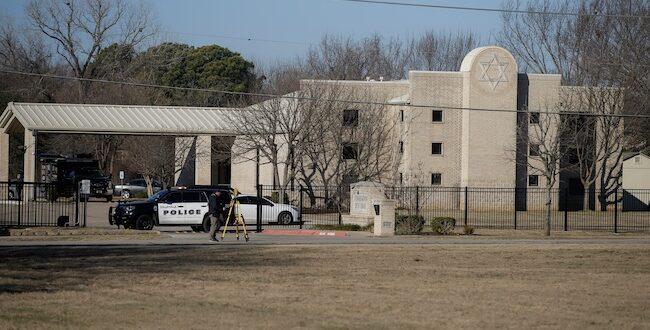 Law enforcement officers process the scene in front of the Congregation Beth Israel synagogue, Jan. 16, 2022, in Colleyville, Texas. A man held hostages for more than 10 hours Saturday inside the temple. The hostages were able to escape and the hostage-taker was killed. FBI Special Agent in Charge Matt DeSarno said a team would investigate “the shooting incident.” (AP Photo/Brandon Wade)

The rabbi offered the man at the synagogue door a warm place to stay and a cup of tea.

But the gesture, seen by most Jews as a commandment to welcome the stranger and offer hospitality, is now under severe strain.

What happened next is well-known. A 44-year-old British citizen entered Congregation Beth Israel in Colleyville, Texas, on Saturday morning (Jan. 15) as Shabbat services were about to be livestreamed, and took four people, including the rabbi, hostage at gunpoint.

In the wake of an 11-hour standoff that ended with the hostages’ escape and the gunman’s killing, synagogues across the nation are prioritizing the safety of Jewish worshippers and accelerating a series of safety measures that most likely will include forbidding entry to strangers.

“I would not have had the courage, I would not know what to do, without that instruction,” Cytron-Walker told CNN’s Wolf Blitzer. “Right now that is something that’s very important for people to take advantage of because it saved my life; it saved our lives.”

Cytron-Walker was referring to his willingness, after 10 hours of negotiations, to throw a chair in the direction of the gunman, yell “run!” and lead two congregants through an exit door. (A third had been released earlier.)

“In terms of choosing between our moral obligation and security, we have to prioritize security,” said Mitchell Silber, executive director of the Jewish Community Security Initiative for eight counties around New York City. “Our guidance here in New York is not to let the person in because then you’ve lost control of the situation.”

That grim acknowledgment is increasingly winning the day, as more synagogues — in Hebrew a synagogue is called a “beit knesset,” or “house of gathering” — choose to put the security of their own first.

In 2004, the Jewish Federations of North America and the Conference of Presidents of Major American Jewish Organizations set up an organization called the Secure Community Network to undertake threat assessments, coordinate training, offer consultation on safety and connect to law enforcement during critical incidents.

While 45 of the U.S. and Canada’s 146 local Jewish federations have taken advantage of the network and have put structures in place to fund their own security initiatives, smaller federations have not.

Now the umbrella group Jewish Federations of North America is ramping up its fundraising for a $54 million “LiveSecure” initiative to beef up security at all Jewish institutions across the continent and advocate for additional federal dollars through the Nonprofit Security Grants Program. Last year, the Federal Emergency Management Agency offered nonprofits, including houses of worship, $180 million in grants to add cameras, install bulletproof windows and retrofit buildings with additional security measures.

The LiveSecure campaign was rolled out late last year. Now it’s risen to the top of the group’s priorities.

“There’s an understanding that even if we haven’t gotten to the last dollar of the $54 million, we have to begin the rollout,” said Julie Platt, who chairs the LiveSecure campaign for the Jewish Federations of North America. “We can’t wait until it’s completed. None of us want to have any regrets.”

Platt said the initiative, which includes a two-thirds match for local federations, will ultimately provide $126 million for security protocols.

In the meantime, various programs are cropping up across the nation. One of those trains volunteers to provide security on the perimeters of synagogues and other Jewish institutions. The Community Security Service has trained 6,500 people, in such states as New York, New Jersey, California and Georgia, to patrol buildings during services and report suspicious activity to law enforcement.

“The more an institution shows it’s a hard target, the less likely it is that someone will go after that target,” said Evan Bernstein, the CEO and director of CSS. “We want to make synagogues a hard target.”

Bernstein said there are now 125 synagogues with teams of five to seven lay people trained to be the eyes and ears of the congregation during services.

Others have locked doors, hired guards, set up cameras, installed intercom systems. Increasingly, how synagogues treat people at the door is changing.

“We have to go about showing our love and compassion in different ways,” said Rabbi Matthew Soffer of Judea Reform Congregation in Durham, North Carolina, the city’s largest synagogue.

If, before, the natural inclination was for synagogues to welcome people in for a cup of coffee, Soffer said, today a volunteer might direct people to a soup kitchen or a homeless shelter or offer them a grocery card and an Uber ride.

“It’s truly sad we can’t fulfill that mitzvah directly as we imagined ourselves doing,” Soffer said. “But we also know antisemitism is very real.”

Without detailing specific security arrangements, Soffer said no one enters his synagogue now without one of the leaders knowing who they are.

“It sends a message to our members, including those coming for the first time, that we take their safety really seriously,” he said.

That, too, he said, is a form of welcome.

Previous E-Cigarettes and Religion: Beliefs That Vapers Should Know
Next Where Faith and Ethics Meet