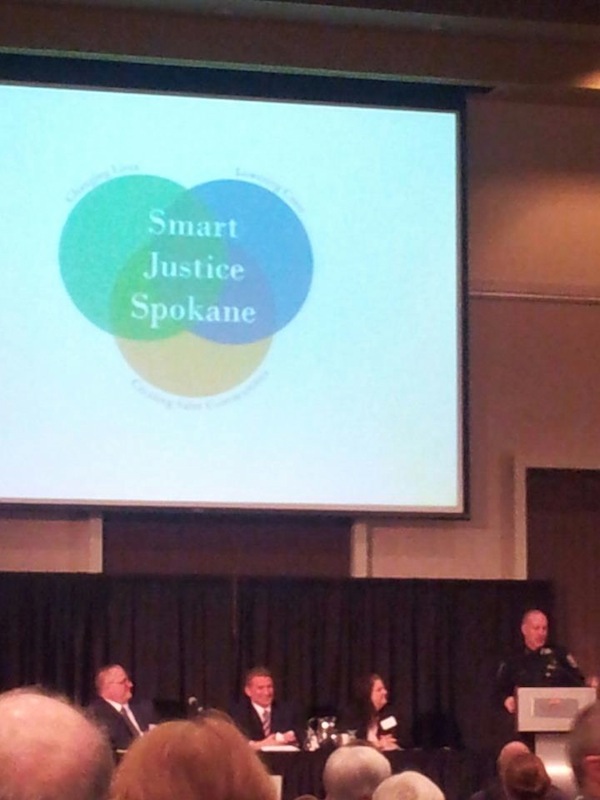 Symposium shows “The time for ‘smart justice’ has come”

The Smart Justice Spokane Symposium took place Nov. 9 at Northern Quest Resort and Casino. The hosts from the casino were wonderful, the space was great, the lunch was very enjoyable, kudos to all who set up, planned and served this event!

The agenda was jam-packed with judges, prosecutors, public defenders, attorneys and legal system experts from all over Washington and beyond. There was a wealth of information on statistics, risk assessment, alternate courts, community safety, DOC re-entry programs, and some very good comments from our sheriff, police chief and mayor. There was way too much information to share in a post like this so I thought I would give you some highlights and my own insights. Admittedly these are things I gleaned from listening and will not be comprehensive but should give a good sense of the gathering.

David Bennett, a criminal justice consultant, gave us the ABC’s of Spokane’s criminal justice system.  Our jail is doing very well, being at or under average numbers of bookings, length of stay and several other stats. Overall crime in the U.S. is down since 1980 all across the country and here in Spokane County as well. The struggles the jail has now are repeat offenders, dealing with mentally ill and finding space for the large number of inmates. Bennett was very clear that jail needs to be “the alternative” instead of the conventional means of dealing with crime. Specialty courts, such as drug court, mental health court, and veterans enhanced treatment court, to name a few, are great alternatives to jail that hold people accountable and provide people the treatment that they need to become productive members of the community. There are other programs as well like driver re-licensing and diversion here in Spokane, and law enforcement assisted diversion in Seattle.  We heard about early case resolution, cognitive behavioral therapy, rational emotive behavior therapy and transitioning for clients leaving the system.

And that was just the tip of the iceberg, hearing these stories and information from judges and prosecutors and defenders was good for me. I am more confident that we have good people in our legal system trying to make it work for citizens, offenders and victims. We also heard the courts are overwhelmed (one public defender said he worked some 750 cases in a year). I think the alternate courts are a good idea, there doesn’t seem to be enough of them to go around. One common factor for all the alternate courts is that sex offenders are NOT eligible for any of these options. Tuere Sala, a deputy prosecutor for the city of Seattle, challenged us at the end of her presentation to work on the sex offender issue, as this population could benefit from these courts as well.  Tuere’s presentation on community courts and community service in Seattle was one of the best I heard. Seattle has had this court for five years and it has been successful. In brief, it is a diversion court where folks are sentenced to community service and given multiple chances to be or become compliant. It is for non-violent offenders and it has changed many lives as well as saved the city of Seattle 2 million dollars over the last 5 years.  We heard from Donna McBride, the chief probation officer for city of Spokane, that if all the courts could reduce recidivism (repeat offenders) by only 10 percent, the country could save $500 billion! She brought us up to date on how electronic home monitoring and day reporting programs work. Basic information can be provided to offenders on some of these programs to try and bridge the “how to” gap so they can transition back to life in the community. This “how to” gap is wider than we think and includes things most of us take for granted; like how to cook, how to apply for a job and other “life skills.”

Some of the speakers worked through a case study for “Nolan,” who represented a typical case of how a young person begins in crime and where they ultimately wind up. Knowing who we are dealing with and how they get where they are is important in how we work with them later and hopefully in finding ways to “interrupt” the system and keep younger offenders out of court all together. Education disruption was the number one thing pointing to bad outcomes. Most of these “early” offenders act out of their own immediate needs and wants. Helping these people learn to have goals and to “decide” for someone else is critical to turning their lives around. We met Marcus Ransom, a graduate student, community volunteer and released offender. His story generated a standing ovation as he told us about his experience in the system, his prison time and how he worked his way back. It was truly remarkable to hear how he overcame multiple obstacles to become a productive contributing member of society.

Police Chief Frank Straub spoke on his history of working with communities to develop better ways of dealing with conflict in public spaces. He addressed the issue of de-escalating conflict with the mentally ill and called for Spokane and its police department to work together to see that an Otto Zehm incident never happens again. He also brought the crowd to their feet in appreciation for his encouraging words.

The day ended with some questions with all those gathered voting on various “loaded” questions, such as, “Do you think promoting current and new alternate therapeutic courts are the way to go?”  The audience affirmed that the time for “smart justice” options has come.

Previous BRIEF: Spokane group will rally to tell Israel to cease fire on Gaza
Next FAVS photos of the week: Diwali, Skepticon and a mix of celebrations