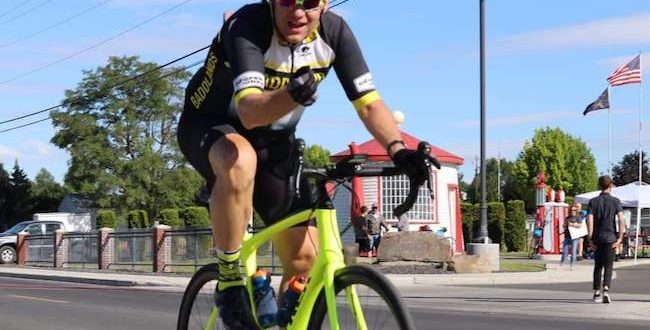 Scott Starbuck rides across Washington to raise money for refugees/Contributed

Today, there are nearly 71 million displaced people in the world; people without country, political support and protection, without standing as a human created in the image of God.

When Jeremiah wore an ox yoke to symbolize imperial bondage, he did it to raise awareness and advocate for change.  He did this in a religiously fraught and politically divided context.  When Ezekiel packed his bags and journeyed from Jerusalem, he did so to raise awareness for the impending exile and to bear a bit of its lived-reality in his person.  Prophets used fully-vested and surprising actions to communicate God’s heart in the midst of human chaos and misguided religiosity.

On a wet Wednesday morning, June 19, 45 cyclists began pedaling from Hogan Park in Kent to ride 430 miles in five days to perform a community prophetic symbolic action. Riders spanned ages from their 20s to 80s, men and women, parents, and grandparents. Sixteen of the riders were members of the Spokane community, and seven were from Manito Presbyterian Church. This symbolic act has a symbolic name, Sea-Tri-Kan, not unlike the symbolic names of Isaiah’s and Hosea’s children. The route links the cyclists to World Relief’s three offices for Refugee Support in Seattle, Tri-Cities, and Spokane.

For many, this cycling adventure across Washington state might begin as a “bucket list” adventure. The motivation is deeply personal and challenging.  Each rider, whether a community member, local refugee, or seasoned cyclists has to train for the ride by logging significant miles and riding up a lot of hills. The riders at Manito Presbyterian church created a Meetup group for training rides and invited the local community to prepare with them. We also committed to raising funds for refugee resettlement and support in Spokane.  Our team of seven set out to raise $14,000, $2,000 per cyclist. As good Presbyterians, raising money makes us very uncomfortable. In fact, this seemed to many of us to be a more daunting task than getting into “riding shape.” In order to ask friends, co-workers, and family to support our Christ-centered cause, we had to learn how to advocate for refugee resettlement in a politically deeply-divided time. It helped that we put our own selves on the line, and that we were raising funds for others and even another organization than the local church.  Manito Presbyterian Church partnered with us by focusing on refugee issues during World Communion Sunday, the Blessing of the Bicycles, and with our talented musicians throwing us a benefit concert.  Despite our initial anxiety, discomfort, and fear, our seven-member peloton raised $30,000, just part of the $75,000 raised by all the Spokane riders and $162,000 raised by all Sea-Tri-Kan riders. These funds are tripled through matching grants and added to by volunteer hour credits, so the ride raised about a half-a-million dollars!

The ride, itself, is much more than a ride. It is physically, intellectually, spiritually, and socially demanding.  We pedaled in rain and climbed in snow. We encountered flat tires, bee stings, and asthma attack inducing pesticide spray. We rode consistently for five days and were so very happy to take in God’s beauty, build friendships, struggle to complete the harder sections of the ride, and then, finally, arrive in Spokane. The funny thing was, though our legs had had enough, our hearts were open and bounding to continue for the community and the cause.

Throughout the ride, we were with refugees, hearing their compelling stories, viewing their plight through art and report, and symbolically embracing their vulnerable journey. Even though Jeremiah’s yoke was nothing close to Babylonian imperial oppression, it caused a lot of minds to begin thinking about it. So too, riding on bikes across Washington state is nothing like fleeing your country because of persecution and holding up in a UN refugee camp for years upon years, riding the open roads where we were at least vulnerable to the elements and our own fatigue (and perhaps an occasional motorist who clearly conveyed we had no right to exist), got our minds thinking. It is evidence of the Holy Spirit at work in our community. Throughout our trek, World Relief was there providing water, food, and encouragement; even a massage or two. They are so very good at hospitality and each rider felt loved, supported, valued, and empowered. We all needed all of these human “touch and voice” things to make it.

Even more, refugee families arriving in Spokane need this as well. God calls us to it. The Manito Presbyterian Peloton learned that with such support, we can move (up) mountains and face what before seemed unthinkable and impractical, even physically impossible. Surely, this must be God’s doing!

In what ways might your congregation join in Sea-Tri-Kan 2020?

Rev. Scott Starbuck is the pastor of Manito Presbyterian Church.

View All Posts
Previous Ask An Evangelical: I believe in God vs. I know God exists
Next Poll: Americans rarely seek guidance from clergy

Although he prescribed ethical guidelines for us to follow, it is our choice whether to do so or not.