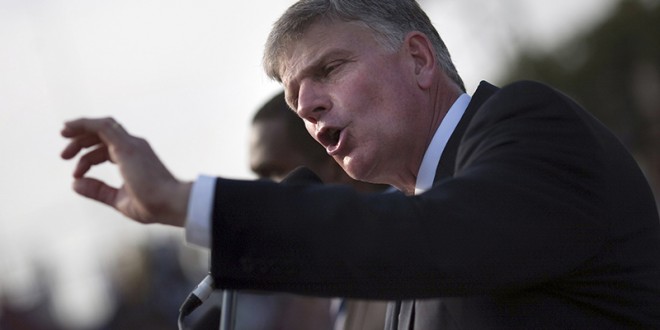 (RNS1-may20) Franklin Graham, son of evangelist Billy Graham, addresses the crowd at the Festival of Hope, an evangelistic rally held at the national stadium in Port-au-Prince, on January 9, 2011. Photo courtesy of REUTERS/Allison Shelley *Editors: This photo may only be used with RNS-FRANKLIN-GRAHAM, originally transmitted on May 20, 2015.

Swinging a Bat at a Hornet’s Nest

Swinging a Bat at a Hornet’s Nest

When power is viewed as an all-or-nothing game of brute force, losing even the slightest ground feels like gut-wrenching defeat. It is why conservative Evangelicals have bemoaned the progress made by passing marriage equality and the rights for abortion access expanded under Democratic leadership. Evangelical leaders were quick to celebrate after the Supreme Court’s ruling in late June.

“The radical left is calling for a ‘night of rage,’” said Rev. Franklin Graham, son of revered evangelist Billy Graham. “Sadly, [overturning Roe v. Wade] is not an end to abortion – it pushes the battle back to the States.” Abortion providers have been attacked, bombed, threatened, kidnapped, and even killed – but the left is threatening to protest, and suddenly respectability and civility are what is really needed right now.

For many of us who have left conservative Evangelicalism behind, Graham’s lament over “the radical left” and his pivot toward fighting for more extreme laws are far from shocking. They are par for the course. Franklin Graham and his father, along with other major conservative Evangelical leaders, traded piety for political power. They sold their moral majority the cognitive dissonance that wins elections; that is, white conservative Evangelicals’ belief that they are being attacked for their faith at every turn, while simultaneously holding enormous political and religious power and enforcing their beliefs and practices on others.

Indeed, conservative Evangelicals read the Bible and see themselves as the Israelites escaping slavery from Egypt, or fighting off the oppressive Philistines and Babylonians, or subverting and protesting Roman occupation. If they took an honest view of themselves and the world around them, they would realize that instead of being oppressed, they are the oppressors.

I do not mean this to say that conservative Evangelicals are evil, or that they all wish to physically harm others who don’t conform to their beliefs. However, the main thrust of conservative Evangelicalism is to make others disciples of Christ who will believe and behave in their spiritual forebears’ footsteps. In our American society, conservative Evangelicals have the power to enforce harsh penalties against those in their communities who live, think, and worship differently – recent Supreme Court decisions, including overturning Roe v. Wade and reconsidering the Indian Child Welfare Act (ICWA), highlight their persistence in stamping out nonconformity.

This cognitive dissonance is due to and shored up by white supremacy. As an example of this, I turn to the Southern Baptists who formed the Southern Baptist’s Convention (SBC) in 1845 in a schism from Northern Baptist churches. Why split, and why then? The SBC was and is a microcosm of the USA. They, like the Confederate States, wanted power – Biblically backed, righteously baptized power – over enslaved people. They simultaneously bemoaned the lack of white power during the Civil War and through the Jim Crow era while also launching cruel, abominable acts of terror against Black Americans. When white conservative Evangelicals can convince themselves they are a mistreated minority, they can act any way they wish against those they consider oppressors – it is not merely an allowed but encouraged form of resistance.

In response to “Christianity Today” issuing an editorial in December of 2019 calling for the impeachment of then-President Donald Trump, Dr. James Dobson of “Focus on the Family” fame had this to say:

“Maybe the magazine would prefer a president who is passionately pro-abortion, anti-family, hostile to the military, dispassionate toward Israel, supports a socialist form of government, promotes confiscatory taxation, opposes school choice, favors men in women’s sports and boys in girl’s locker rooms, promotes the entire LGBTQ agenda, opposes parental rights, and distrusts evangelicals and anyone who is not politically correct. By the way, after Christianity Today has helped vacate the Oval Office, I hope they will tell us if their candidate to replace Mr. Trump will fight for religious liberty and the Bill of Rights? Give your readers a little more clarity on why President Trump should be turned out of office after being duly elected by 63 million voters?”

Dobson names and shames every frightening monster conservative theologians have set up for laypeople through the decades: People who get abortions. Homosexuals. Transsexuals. Refugees and immigrants. Sex workers. Muslims. Democrats. Pacifists. The list goes on and on, in part due to the fact that conservative evangelicals continue to set themselves against anyone who does not reflect their white, straight, cisgender, Evangelical theology from 1952.

This may sound harsh. It is harsh. I am begging conservative Evangelicals to wake up and escape the echo chamber they have found themselves in and discover a larger, wilder, more beautiful world around them. When the energy that has been poured into fighting straw men becomes focused instead on fighting the real forces of injustice in this world, we can truly become a faith that reflects its founder.

A self-described “Ex-vangelical,” Mackenzie Draper loves to expand her spiritual and theological horizons on her travels, particularly to the bookstore. She grew up a pastor’s kid and missionary kid living in Bosnia and Serbia as child, and then moved back to Spokane her freshman year of high school. In the interest of saving time, she decided to have a crisis of sexuality as well as a crisis of faith around the time she graduated from Spokane Falls Community College and began attending Gonzaga University. Draper has now come out as a lesbian and has the most amazing partner and life she could imagine. While she still wrestles with faith and the ramifications conservative Evangelical theology has on her relationship to family, she is a passionate, lifelong learner and is devoted to living well and doing good in her world. You can find her in various thrift stores around town scouring the bookshelves or huddled over a crochet project trying to count stitches.

Previous The Committee That No One Heard
Next Ask A Muslim: Same-Gender Attraction