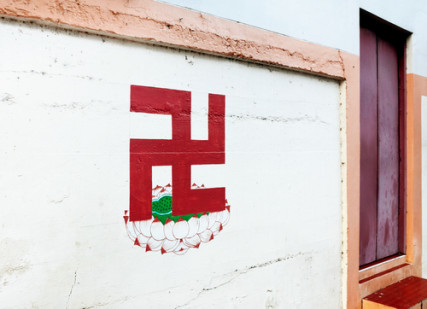 Swastika on a wall in Thailand. Photo courtesy of Migel via Shutterstock

(RNS) The first-ever global study of anti-Semitic attitudes shows that more than a quarter of the world’s population harbors intense anti-Jewish sentiment, with region, more than religion, shaping people’s view of Jews and Judaism.

The poll, released Tuesday (May 13) by the New York-based Anti-Defamation League, also finds that a large proportion of the world has never heard of the Holocaust or denies historical accounts of it.

Of those polled, 46 percent have either not heard of the Holocaust that killed 6 million Jews or think it is a myth or exaggerated.

“For the first time we have a real sense of how pervasive and persistent anti-Semitism is today around the world,” said Abraham H. Foxman, national director of the Anti-Defamation League.

He called the results of the Global 100 Index “sobering but not surprising” and said it would serve as a baseline for the ADL to understand where anti-Semitism is most prevalent and where education is most necessary. The results of the survey of 102 nations and territories revealed stark regional differences, and hotspots of anti-Semitism around the globe.

The 10 most anti-Semitic countries and territories, according to the survey, are the West Bank and Gaza, Iraq, Yemen, Algeria, Libya, Tunisia, Kuwait, Bahrain, Jordan and Morocco.

Swastika painted on a wall. Photo courtesy of Minerva Studio via Shutterstock

In the U.S., 9 percent of those surveyed revealed anti-Semitic views.

The poll is based on 11 questions that refer to common stereotypes about Jews, such as “Jews have too much power in international financial markets” and “Jews are responsible for most of the world’s wars.” Those who answered “probably true” to six or more questions were deemed to be anti-Semitic.

Overall, 28 percent of respondents answered “no” to all 11 stereotypes presented of Jews when asked if they were true.

Asked if a person could still be considered anti-Semitic for affirming only three anti-Semitic stereotypes, Foxman said the ADL purposely set the bar for anti-Semitism very high, so as to make its results conservative.

Though the survey found Muslims to harbor more anti-Semitic views than Christians, Hindus and Buddhists — and Protestants fared better in the survey than Catholics — a person’s region seemed to correlate more strongly with views on Jews than did a person’s religion.

The survey shows that Greece, at 69 percent, has the highest levels of anti-Semitic attitudes of any country outside the Middle East, a proportion far higher than the Western European average of 24 percent.  Already, Foxman said, “the prime minister of Greece had learned of our findings and requested that we come and visit.”

Survey researchers polled more than 53,000 adults in 96 languages. The study has a margin of error of plus or minus 4.4 percentage points for most countries.

The survey was funded by a grant from New York philanthropist Leonard Stern. Foxman said the survey cost “a lot” but declined to disclose the exact cost.

The Holocaust – Global Awareness and Denial