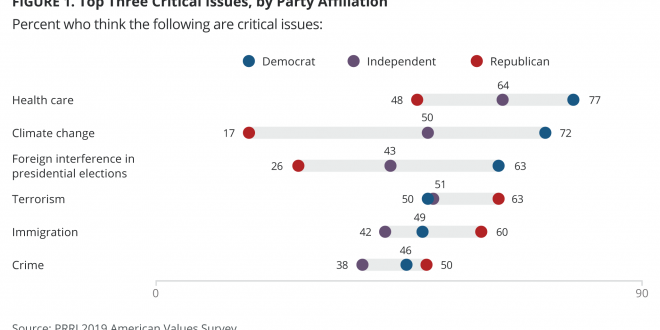 A survey released today by the Public Religion Research Institute shows that most Americans agree health care and terrorism are political issues that need immediate attention.

The American Values Survey showed that religiously unaffiliated and non-Christian religious groups closely resemble Democrats in that they are likely to regard climate change and foreign interference in presidential elections as part of their top three critical issues. Black Protestants are the only religious group to prioritize crime and fairness of presidential elections as critical issues, while Hispanic Protestants are the only group to say the same about jobs and unemployment.

Another key finding of the 25,000-person survey was that 2 in 3 Americans believe the country is “on the wrong track” and 57 percent of Americans say President Donald Trump’s behavior has encouraged White Supremacist Groups.

The full study, which include information on policy issues, the 2020 election and views on impeachment, can be found online.

Founded by ex-Scientologists turned Satanists, the Foundation Faith of God and its members awaited the end of the world but when it didn't come, the group decided to rescue animals instead.