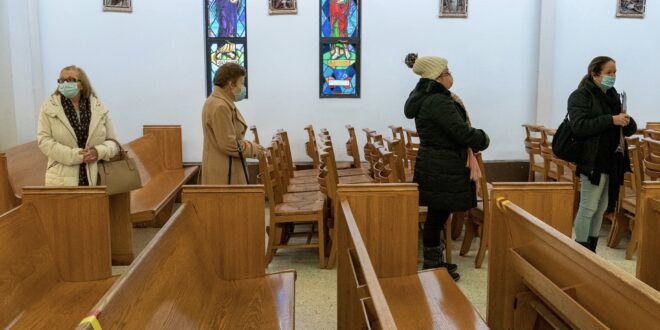 People line up next to the pews at a pop-up COVID-19 vaccination site at St. Luke's Episcopal Church, Jan. 26, 2021, in the Bronx borough of New York. (AP Photo/Mary Altaffer)

Survey: Americans most likely to say pandemic has boosted their faith

Survey: Americans most likely to say pandemic has boosted their faith

Faith is one way some people cope with crisis. But according to a new Pew Research survey of 14 countries, the coronavirus pandemic has not significantly boosted people’s faith.

Of the countries surveyed — all advanced economies with significant secular populations — Americans were most likely to say the pandemic made their faith stronger. But even in the United States, only 28% reported a stronger personal faith as a result of COVID-19.

The survey, which was fielded this past summer, showed majorities or pluralities in all the countries surveyed did not feel their faith has been strengthened by the pandemic, including 68% of U.S. adults who say their own faith has not changed much.

Perhaps not surprisingly, nearly half of white evangelicals in the U.S. (49%) said their faith grew stronger due to the coronavirus outbreak — more than any other group. U.S. Catholics came in second, with 35% saying their faith increased. Among mainline Protestants, 21% said their faith was bolstered by the pandemic, while 5% of people who do not affiliate with any religion said their faith grew.

“Americans’ greater proclivity to turn to religion amid the pandemic is largely driven by the relatively high share of religious Americans,” the report said.

By contrast, in Denmark only 2% said their faith had grown; in the U.K. 10% said it had grown.

In times of crisis, people also turn to family. Researchers for the survey asked respondents if their relationships with immediate family members have grown. The survey found that among the 14 countries, a median of 32% said relationships have grown stronger. Only 8% said the opposite.

In the U.S., young Americans, many of whom have moved back in with their parents, are more likely than their older counterparts to say their relationships with immediate family members have strengthened. Half of U.S. adults ages 18 to 29 said their family bonds have tightened, compared with 38% of those ages 50 and older.

The survey was conducted from June 10 to Aug. 3, 2020, among 14,276 adults in 14 countries: the United States, Canada, Belgium, Denmark, France, Germany, Italy, the Netherlands, Spain, Sweden, the United Kingdom, Australia, Japan and South Korea.

Your tax-deductible donations can help us pay for our RNS subscription!

Previous Victims Are Not All The Same
Next Ask A Hindu: Worship Services?