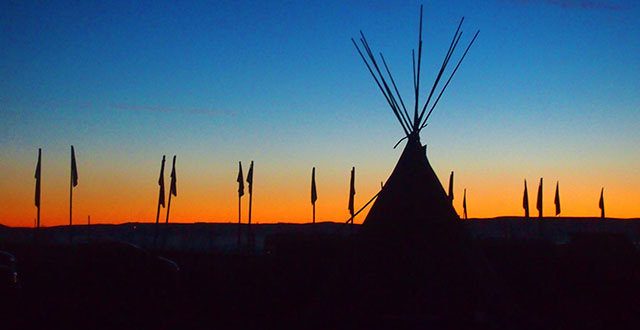 Surprised and Thrilled by Hope at Standing Rock

I teach a course at Whitworth called “The Psychology of Poverty and Social Class” in which we explore the psychological effects of material, social, and spiritual poverty.  We do this by listening to the voices of several marginalized groups, one of which is Native Americans.  After reading “The Absolutely True Diary of a Part-Time Indian,” discussing past and present dehumanization, and learning about the history of broken treaties and ongoing environmental racism, I end the class by stating that if we are ever to move forward as a country, we must recognize that we (European Americans) committed the largest mass genocide in history, and we must ask for forgiveness.  There is a sense of agreement among the students to this statement, as impossible of a reality as it may seem.

Back in October, when our class focused on this topic, Standing Rock felt like Occupy Wall Street; a noble effort, but one that would either be defeated or would fizzle out with cold weather at its doorstep.  Students asked if I really thought the pipeline wouldn’t go through; I replied with a not-very-helpful “I don’t know.”

As we have all heard by now,  the U.S. Army Corps of Engineers denied easement to the Dakota Access pipeline, effectively blocking construction through sacred Sioux lands. This happened shortly after 2000 U.S. veterans joined others to stand in solidarity with the water protectors and one day before the camp was to be evicted.

What a wonderful victory for the water protectors and the Lakota people!

But then something else happened, something that I didn’t even know we should be hoping for. Apology and forgiveness.

And then he and other veterans knelt before the elders. It was an emotionally moving act of contrition, made by an institution that isn’t known for saying “sorry.”  What seemed impossible had happened, and without warning.

Watching the video of this act stirred my soul.  After 18 months of an enveloping darkness pulled in by an election that seemed to bring out – or at least focus on – the absolute worst in people, there was a glimmer of hope.

But it was more than a glimmer.  The glimmer came with the pipeline denial; all of the hard work by the water protectors and their allies had paid off. No, this feeling of hope was different.  The contrition expressed by the veterans seemed divinely inspired. This hope was accompanied by the realization that good can happen that transcends working hard or beating the odds.  This hope experienced was caused by realizing we are not in control.

It was the “thrill of hope” that appears in the carol O Holy Night:

A thrill of hope the weary world rejoices

For yonder breaks a new and glorious morn!

In his book “Surprised by Hope,” N.T. Wright states that the new creation promised by God will not be something all together different, but rather a transformation of our current world.  Thus, our present actions do count towards the future.  This “collaborative eschatology” may either bring about necessary changes needed for the transformation, or it may be that working for justice transforms us, preparing us for the Kingdom of God.  Either way, our work will bring tangible, visible signs of hope into the present world.  While it’s impossible to know exactly what led to the Army Corps’ decision, it’s likely that the support of the 2000 veterans and other allies for the work of the Lakota water protectors was instrumental in stopping the pipeline, and it certainly demonstrated to the Lakota people that they were not standing alone.

But Wright also talks about the surprise that comes with hope.  He sees the transformation of this world beginning with the resurrection of Christ, an event that defied the law of nature. When Mary Magdalene went to the tomb the day after the crucifixion, she was surprised to see the stone rolled away.  She did not know she should be hoping that Jesus would be alive. When she realized the angel who was speaking to her was Christ himself, she cried out. Her soul was stirred, and she ran to tell the others what had happened, to share the thrill of hope she had just experienced.

The victory won at Standing Rock is not final.  A new administration begins Jan. 20, and there is good reason to believe the decision will be overturned.  The water protectors are strong and determined and have been strengthened by outside support; this gives me hope that the fight is not over. But what truly brings me hope is knowledge that the unexpected can occur, that we don’t necessarily know what we should be hoping for, and that we can be surprised by hope.

Previous Video of today’s Coffee Talk – Bridging the Divide
Next Ask An Evangelical: What is an evangelist? Part 2