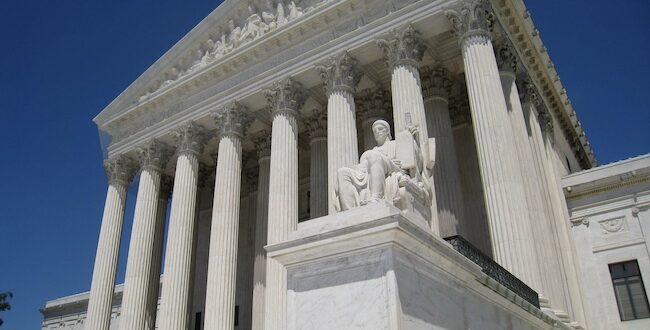 A general view of the U.S. Supreme Court building in Washington. Photo courtesy of Creative Commons

A federally funded foster and adoption agency that opposes same-sex marriage on religious grounds can be exempted from serving such couples, the Supreme Court ruled on Thursday (June 17).

In a unanimous ruling, the justices once again showed they were receptive to claims by religious groups, in this case, Catholic Social Services, which refuses to work with same-sex couples. The agency contracts with the city of Philadelphia to screen potential foster parents.

Beginning in 2018, the city of Philadelphia asked that all contractors follow the city’s anti-discrimination policies.

Catholic Social Services along with two Catholic foster care parents — one named Sharonell Fulton — sued the city, claiming the free exercise clause in the First Amendment gives it the right to opt out of the nondiscrimination requirement. After a lower court and a federal circuit court ruled in the city’s favor, CSS appealed to the Supreme Court. The opinion, by Chief Justice John Roberts, reversed the circuit court ruling.

“The refusal of Philadelphia to contract with CSS for the provision of foster care services unless CSS agrees to certify same-sex couples as foster parents violates the Free Exercise Clause of the First Amendment,” the opinion states.

The justices’ opinion gives yet another victory for religious rights. A study published earlier this year found a 35-percentage-point increase in the rate of Supreme Court rulings that favor religion over the past 70 years.

In Burwell v Hobby Lobby, the court held that the contraception mandate in the Affordable Care Act violated the rights of a corporation owned by a religious family. And in Masterpiece Cakeshop v Colorado Civil Rights Commission, the court held that a baker’s First Amendment rights were violated by the state commission that enforced its anti-discrimination law.

Some critics feared the opinion may limit the scope of the landmark 2015 ruling that allowed same-sex marriage, making clear LGBTQ Americans cannot expect the same protections as other groups.

LGBTQ rights groups immediately interpreted the ruling as another defeat for sexual equality.

“This ruling will certainly impact foster care and adoption services immediately and perpetuate some pretty horrific myths in the culture —  doubting our ability to provide effective parenting,” said Marianne Duddy-Burke, a lesbian who is executive director DignityUSA, an organization of Catholics committed to full inclusion of LGBTQ people.

Duddy-Burke and her wife were denied the ability to adopt through Catholic Charities in Massachusetts. The couple — both of whom are Catholic — were eventually able to adopt two children by working directly with the state.

The ruling adds to a recent spate of legal setbacks for LGBTQ people.Ten states adopted two dozen laws targeting transgender individuals this year. In seven of those states, transgender athletes can no longer compete in school sports.

Previous 6 Myths About The Funeral Cost
Next Finding Trusted News Sources? List of Most Unbiased News Website in the World