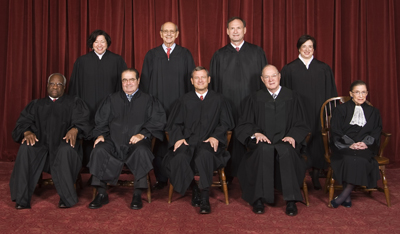 (RNS1-OCT05) Members of the U.S. Supreme Court heard arguments on Oct. 5 n a case that pits government anti-discrimination law against the autonomy of religious groups to hire and fire employees on the basis of religion. For use with RNS-SCOTUS-HIRING, transmitted Oct. 5, 2011. RNS photo courtesy U.S. Supreme Court.

WASHINGTON (RNS) After two blockbuster terms in which it saved President Obama’s health care law and advanced the cause of same-sex marriage, the Supreme Court appears poised to tack to the right in its upcoming term on a range of social issues, from abortion and contraception to race and prayer.

The justices, whose term begins Monday (Oct. 9), could rule against racial minorities in two cases and abortion rights in one or two others. They also could uphold prayers at government meetings, ease restrictions on wealthy political donors, strike down federal environmental regulations and take a first bite out of Obamacare.

The court, whose work won’t be halted by the government shutdown, also may be ready to restrict the power of the federal government and stand up for states and municipalities in several cases, furthering their defense of federalism.

“They don’t defer to the other branches. They don’t seem to care about precedents,” said Stephen Wermiel, a constitutional law professor at American University Washington College of Law. The justices, he says, are “more than willing to step up to the plate.”

“You could not have less deference to a legislative institution,” said David Salmons, an appellate lawyer who has argued 14 cases before the high court. “This is a court that’s very comfortable in exercising their power.”

Conservative interest groups, perhaps seeing their best chance in years to advance their causes, have argued aggressively in their briefs to the court not only for favorable rulings but for overturning some of the court’s time-honored precedents: a 37-year-old campaign finance decision, a 31-year-old ruling on racial integration, even a 93-year-old opinion allowing the federal government to supersede state laws when implementing international treaties.

“They think they have the wind at their back,” says Pamela Harris, a former Justice Department lawyer now teaching at Georgetown University Law Center.

Most of the high-profile cases on the docket fall into one of two categories: Lower courts sided either with liberal activists or federal agencies. They include:

The court also is likely to choose from among dozens of challenges to the Obama health law’s requirement that employers include contraceptive services in preventive health insurance plans. In that case, lower courts have ruled both ways, and the government is among those seeking the high court’s review — but conservatives have the most to gain.

“The court will get another shot at the Affordable Care Act,” says Paul Clement, a former solicitor general under George W. Bush and the nation’s premier Supreme Court litigant. Clement represented states challenging the law in the historic 2012 case.

The medical abortion case probably won’t be the last effort to push the justices into further limits on abortion rights. More cases are in the pipeline, including state laws banning abortions after 20 weeks, mandating ultrasound tests and imposing new restrictions on abortion clinics.

Even the landmark cases most recently decided on same-sex marriage, voting rights and affirmative action could get encores at the high court in the near future. The lawyers who defeated California’s Proposition 8 ban on gay marriage joined a Virginia case that seeks to legalize the practice there.

Previous Ethical spending: Eat your vegetables!
Next What the Bible says about Christians and money