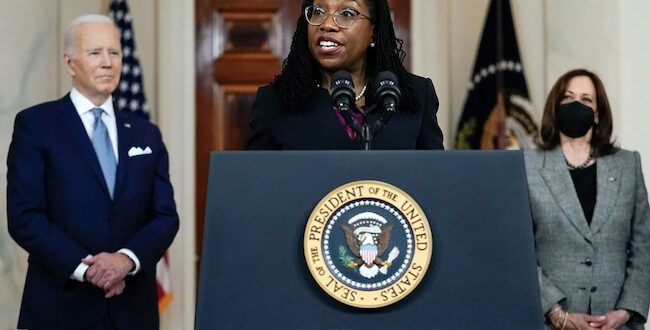 Supreme Court nominee Ketanji Brown Jackson: ‘One can only come this far by faith’

Supreme Court nominee Ketanji Brown Jackson: ‘One can only come this far by faith’

WASHINGTON (RNS) — Immediately after President Joe Biden introduced Judge Ketanji Brown Jackson as his nominee to the U.S. Supreme Court at a White House event on Friday (Feb. 25), the federal appeals court judge stepped up to the podium and appealed to the divine.

“I must begin these very brief remarks by thanking God for delivering me to this point in my professional journey,” she said. “My life has been blessed beyond measure, and I do know that one can only come this far by faith.”

Jackson’s words marked the beginning of what promises to be a historic confirmation process: If approved by the U.S. Senate, Jackson, 51, who currently serves on the D.C. Court of Appeals, would be the first Black woman to serve on the Supreme Court.

“If I’m fortunate enough to be confirmed as the next associate justice of the Supreme Court of the United States, I can only hope that my life and career, my love of this country and the Constitution, and my commitment to upholding the rule of law and the sacred principles upon which this great nation was founded, will inspire future generations of Americans,” she said.

Biden noted the landmark nature of Jackson’s nomination during his introduction, making good on a campaign promise to push for a Black woman on the country’s highest court.

“For too long, our government, our courts, haven’t looked like America,” he said. “I believe it’s time that we have a court that reflects the full talents and greatness of our nation with a nominee of extraordinary qualifications. And that we inspire all young people to believe that they can one day serve their country at the highest level.”

While outlining Jackson’s professional credentials and personal story — such as her two Harvard degrees and family members in law enforcement — Biden argued that she “strives to be fair, to get it right, to do justice.”

If confirmed, Jackson would also be the first federal public defender on the Supreme Court and would bring the total number of women serving on the bench to four — the most in U.S. history.

Jackson did not mention a specific faith tradition in her remarks, so it was not immediately clear whether she would alter the religious makeup of the Supreme Court, which currently consists primarily of Catholic and Jewish justices (Justice Neil Gorsuch was raised Catholic but attended an Episcopal Church in Colorado).

“I applaud the historic nomination of Judge Ketanji Brown Jackson to the Supreme Court. Georgians want a nominee who is fair, qualified, and has a proven record of protecting Americans’ constitutional rights and freedoms. I look forward to reviewing this nomination,” Georgia Sen. Raphael Warnock, himself a pastor, said in a statement.

Longtime racial justice activist the Rev. Al Sharpton, who runs the National Action Network, tweeted out a statement of support for Jackson, calling her “exceptionally well qualified” and possessing the “experience, character, integrity, and dedication to the Constitution and the rule of law to serve on the nation’s highest Court.”

“As the only national Jewish organization which actively vets and endorses federal judicial nominees, NCJW follows the guidance of our tradition which affirms the importance of having ethical, unbiased judges like Judge Jackson who will fight for justice for everyone each and every day,” the statement read. “Her keen intellect, integrity, background, and lived experience are what we need on the Court.”

Religion has been a point of interest in recent Supreme Court nomination battles, particularly the debate over Justice Amy Coney Barrett. When she was nominated by former President Donald Trump in 2020, many observers questioned whether her conservative brand of Catholic faith would influence how she approached issues such as abortion.

Although Jackson reportedly has not ruled on a case narrowly focused on abortion, her appointment nonetheless drew attention of groups concerned about the issue. Jeanne Mancini, president of March for Life Education and Defense Fund, an anti-abortion group, said in a statement she expects Jackson to be “a reliable vote for the far left and the Biden administration’s radical abortion agenda.”

Meanwhile, Jamie L. Manson, president of Catholics for Choice, which advocates for abortion rights, praised Jackson as a jurist with “a long and distinguished record of legal work and judicial decisions that protect and advance the constitutional rights of marginalized Americans, including women and pregnant people, immigrants, and people with disabilities.”

Manson also made mention of Jackson’s April 2021 Senate confirmation hearing to serve on the U.S. Court of Appeals. Manson said Jackson expressed “a clear and firm commitment to the principle that true religious liberty involves both freedom of and freedom from religion.”

During that hearing, Missouri Republican Sen. Josh Hawley noted Jackson had served on the board of Montrose Christian School. The Maryland school, which has since been closed, operated under a statement of faith that declared “we should speak on behalf of the unborn and contend for the sanctity of all human life from conception to natural death” and outlined a belief that marriage exists only between a man and a woman.

In responding to Hawley, who said he agreed with the statements, Jackson distanced herself from the school’s beliefs. She said she did not “necessarily agree with all of the statements,” and was not previously aware of their existence.

She went on to express support for religious liberty, describing it as a “foundational tenet of our entire government.”

View All Posts
Previous Benefits for Seniors to Get Involved In Church
Next POEM: Loving The Homeless