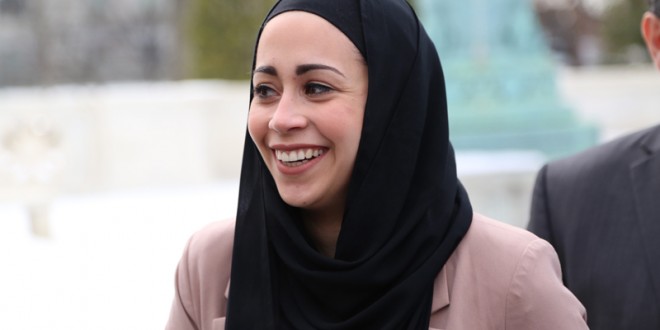 (RNS1-feb25) Samantha Elauf outside of the Supreme Court on Wednesday (Feb. 25, 2015). For use with RNS-SCOTUS-HEADSCARF, transmitted on February 25, 2015, Photo courtesy of Emily Hardman, Becket Fund

WASHINGTON — The Supreme Court ruled Monday (June 1) that companies cannot discriminate against job applicants or employees for religious reasons, even if an accommodation is not requested.

The decision was a defeat for preppy clothier Abercrombie & Fitch, which refused to hire a Muslim girl in 2008 because she was wearing a black hijab, or head scarf. It could benefit job applicants and employees who need time off for religious observances as well as those who adhere to strict dress codes.

Justice Antonin Scalia wrote the 8-1 decision for a near-unanimous court, save for Justice Clarence Thomas’ dissent. Scalia reasoned that even if the clothier did not know  Samantha Elauf’s religion, it still motivated the decision to deny her employment.

“The rule for disparate-treatment claims based on a failure to accommodate a religious practice is straightforward,” Scalia wrote. “An employer may not make an applicant’s religious practice, confirmed or otherwise, a factor in employment decisions.”

The ruling continued the high court’s practice of providing legal protection for religious beliefs and customs. In recent years, it has allowed employers with religious objections to avoid covering some forms of birth control, upheld the practice of opening local government meetings with a prayer, and allowed a Muslim inmate to keep his beard in prison.

That history put Abercrombie & Fitch’s “look policy” for sales associates on thin ice. During oral arguments in February, both liberal and conservative justices refused to believe the company’s insistence that Samantha Elauf, 17 at the time, was turned down simply because of the head scarf, not her faith.

In his dissent, however, Thomas defended the company, claiming that its “neutral look policy” cannot constitute intentional discrimination.

The court’s decision could have implications for religious minorities’ job opportunities and companies’ hiring practices. Muslim women who cover their heads encounter some of the biggest problems. Businesses, on the other hand, claim that requiring them to cater to all religious minorities’ observances is an “undue hardship.”

Title VII of the 1964 Civil Rights Act prohibits employment discrimination based on race, color, religion, sex or national origin. The ban on religious discrimination includes observances and practices, unless the employer cannot reasonably accommodate them.

The clothier’s “look policy” affects the type of clothing, jewelry and makeup its sales representatives can wear, including atop their heads. But it often grants exceptions upon request, including for head scarves.

The circumstances in Elauf’s case actually posed a narrow question: Must the job applicant request a religious accommodation, or should the employer recognize the need for it? During her job interview, Elauf never brought up her religion, and her interviewer never asked.

The federal government maintained that Abercrombie discriminated “when it intentionally refused to hire Elauf because of her hijab, after inferring correctly that Elauf wore the hijab for religious reasons.”

After the Sept. 11, 2001, terrorist attacks, the Equal Employment Opportunity Commission — which sued Abercrombie on Elauf’s behalf — saw a 250 percent increase in religion-based discrimination charges involving Muslims. In 2012, more than 20 percent of its 3,800 religious discrimination claims were filed by Muslims.

Abercrombie & Fitch, backed by the U.S. Chamber of Commerce and other business groups, contended that employers should not be forced to inquire about a job applicant’s religion for fear of appearing to discriminate.

The company settled a lawsuit brought by black, Hispanic and Asian-American college students for $40 million a decade ago and pledged to diversify its hiring, promotion and marketing practices. Since then, it says, it has gone from fewer than 10 percent non-white sales associates to more than 50 percent.

It issued a statement following the Supreme Court’s decision noting “significant enhancements to our store associate policies, including the replacement of the ‘look policy’ with a new dress code that allows associates to be more individualistic; changed our hiring practices to not consider attractiveness; and changed store associates’ titles from ‘model’ to ‘brand representative’ to align with their new customer focus.”

“This case relates to events occurring in 2008,” the company said. “A&F has a longstanding commitment to diversity and inclusion, and consistent with the law, has granted numerous religious accommodations when requested, including hijabs.”