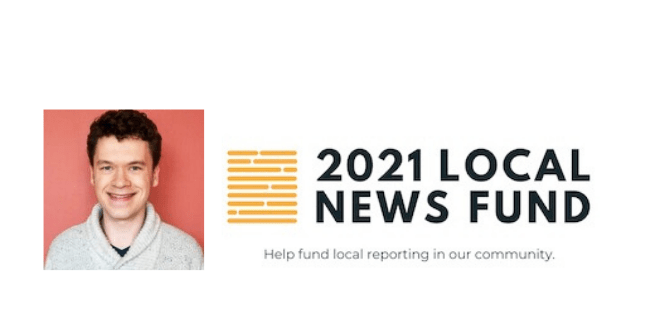 FāVs recently launched a campaign to raise money specifically to pay its team of specialized journalists. As part of that initiative, FāVS will spend the next few weeks introducing you to the reporters you support. A gift of $100 will allow FāVS and its journalists to keep researching, writing and publishing fact-based news stories that impact us all, however a gift of any amount helps!

As an undergraduate student at Gonzaga University, Matthew Kincanon remembers taking psychology and special education classes and feeling like nothing was sticking. He was intrigued by the possibility of becoming a reporter after he took a career assessment and was matched with journalism and law-related fields. Kincanon ended up switching his major to journalism and political science — that’s when he knew he made the right choice. Topics started to make sense and he felt like his courses were breathing life into him, something he had been missing in his previous major.

Kincanon said he has been in love with writing since he was 8 years old. The more he learned and got involved in journalism, the more he felt like it was the perfect fit. Kincanon said he loves getting to meet people and hear their stories.

Kincanon was a SpokaneFāVS intern in summer 2017. With Tracy Simmons as a professor and mentor, he said he developed his journalism skills and grew to love religion reporting. As a Christian, Kincanon said he grew up with a religious education and knew he could get behind writing about matters of faith.

While he was a FāVS intern, he started writing about Indigenous people groups, which later became his beat. Kincanon said he has learned many things through his writing that he should have learned in school and many of his previous misconceptions have been dispelled. Kincanon has written about genocide, spirituality, cultural revitalization, and other topics pertaining to Native Americans in the Pacific Northwest. He said his ultimate goal is to tell readers “Native Americans are still here and they’re doing awesome things.”

“That’s what I’ve been doing to expand on my beat — delving into deeper issues, building more connections, doing more research, and really doing all that I can to show how Indigenous people are still here,” Kincanon said.

Kincanon said he also loves fantasy writing. He is also an avid movie collector with over 700 films in his personal collection. In his free time, he enjoys getting outside to walk and playing Animal Crossing.

We hope you’ll consider giving a gift of support so we can pay our reporters to continue covering local religion news!

Previous Ask A Catholic: Spirits of the Dead?
Next Spokane Valley Vigil to be Held in Response to Rittenhouse Verdict

‘Justice is fundamental to who Deb is’: Spokane pastor runs for county prosecutor - Corruption Buzz