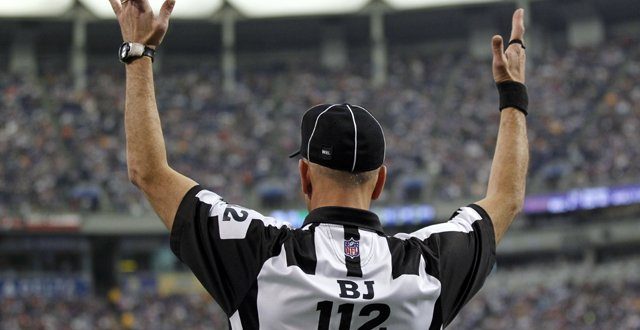 Back of NFL referee/Flickr photo by 22860

As the NFL season comes to a close, two entities have been in the news – the GOAT and the scapegoat.   Forty-one-year-old quarterback Tom Brady is going to his record shattering ninth Super Bowl looking to cement his legacy as the Greatest Of All Time (GOAT) to have ever played the game.  The National Football League would like to avoid any sort of controversy, especially during the playoffs, in order to have the focus of fans and non-fans alike to be on the game, gatherings, and pageantry that are a part of the pinnacle of their presentation of entertainment to fans. The lead up to this week’s game, however, has been marred by missed calls, phantom offenses, and the work of the all-too-human and mistake prone referees during the conference title games.  Social media posts show memes of referees working to help Tom Brady and his coach Bill Bela-cheat (Belichick) make it to the title game, and I can imagine that if the Patriots win again that a segment of the population won’t give them credit for their excellence, but rather will devalue the win and blame a few poor calls in the game, claiming a conspiracy to help Brady reach football immortality.

Sports serve as an interesting laboratory by which we can examine the society as a whole. It is one of the two foundational branches of sport sociology. Nobody within sports seems to be as reviled in recent times as referees. Opening up any social media platform after a big game will show scores of people blaming the officials for their team’s loss.  We’ve seen drops in numbers of people willing to go into the profession of officiating, which has caused a shortage of qualified referees in many youth sports.   People who would otherwise work to support sports programs are refusing to officiate because they’re not willing to “stand there and take the abuse.” Angry parents, coaches, and even players place blame on the officials when something goes awry.  Ironically, officials are a part of organized sport in order to provide control of games, including setting the tone for players, coaches, and ultimately fans.  In relatively recent history, things have changed from the officials being lauded for providing control and authority, to them being ostracized for trying to provide control and authority to games.  If these very human pieces of the game make an error — or a perceived error — there are loud voices (and sometimes physically violent fans) willing to point out their errors. The role of officials has shifted from being a necessary evil to becoming members of the opposition.

Interestingly enough, there is research that says that when you remove the officials from a game setting, cooperation, understanding, and sportsmanship goes up.  The official is no longer in place to take the blame when a player steps outside of the rules.  Parents and fans no longer have a scapegoat to blame, and so play tends to be more honest.

The western idea of a scapegoat comes from Leviticus 16: 8-10. Even though the Hebrew appears to have some translation issues, most scholars agree that the term translates to “goat for Azazel” – the goat for the demon Azazel. The sins of the people were placed on the goat which was sent out of the village (or thrown off a cliff) in order to take the sins away to the wilderness. We see other cultures, including Greek and Romans, who incorporate similar beliefs, using a tangible animal to represent the intangible ideas of the desire wellness, fortune, and rescue from calamity.  Sporting officials take on the role of scapegoat joining a long history of people taking the blame for others.

People scapegoat and blame others as a way of casting away sins, or, as a way for us to escape our own faults and roles in outcomes of events.   Blaming others is a defense mechanism that allows us to project blame onto others while avoiding reflecting on and understanding our own role in the failed outcome of an event. In situations where we feel disempowered, we seek ways to gain power.  Instead of taking on the role of a victim, we automatically move to a place of defense, trying to regain control.   Accepting our own errors and giving up control means we move into a place of vulnerability, which is scary and countercultural. Casting blame on others allows us to preserve our self-esteem and self-image. Giving up control and reflecting in our vulnerability is a key to personal growth, however it is uncomfortable and we often seek to avoid it.

Sports plays such a major role within our society, and the mythology that sports builds character (and in many ways masculinity) is it no wonder that scapegoating in sports has grown?  For example, a young football fan who wants to show how smart they are about sports —culturally proving both a warrior mentality and intellectual acuity — picks a losing team, it would be counterintuitive for that same fan to say “Wow!  I guess I’m not as smart as I thought I was”.  The fan, rather than showing vulnerability clings to their own value while casting blame on officials.

Youth sports opens a whole other ball of wax when it comes to blaming officials.  As the prevalence of organized youth sports has skyrocketed in the past 30 years, so has parental entitlement. Parents get hit from two sides as they interpret their roles in youth sports.  First, because we hold sport in such high esteem, there is a value of having the strongest or most talented player on a team.  There is a projection of self-worth as a parent onto their child.  The myth holds that kids who do bad at sports, then, are a mirror of bad parenting.  Likewise, parents of all-stars must be doing something right as parents in raising their warrior children. Parents also end up paying a lot of money to enroll their children in sports programs, so parents end up feeling entitled to ensure their monetary investment pays off.  Because they believe sports builds character, then parents see their money as an investment in the future of their kids. If those kids lose, thus robbing them of the full character-building potential of sports, then it reflects on the parents.  Parents, then, look for an outlet for their frustration and perceived lost investment, lashing out at the officials.  It is easier to do that than to challenge the cultural myths.

In my work in sport sociology, people will ask me who I am cheering for any time there is a big game. Usually I tell them I cheer for the good story.  I cheer for whatever scenarios I can use as examples in my classes — seeking ways to make theories come alive for my students.  I would love to see the once underdog sixth round draft pick Brady pick up another ring, as it helps me with scenarios to use the rest of the quarter.  Looking at the weekend however, in light of scapegoating and vulnerability, I might have to cheer for the officials instead.

Previous Discuss the Future of Interfaith at the Feb. 2 Coffee Talk
Next Austin Channing Brown, a leading voice on racial justice, coming to Whitworth