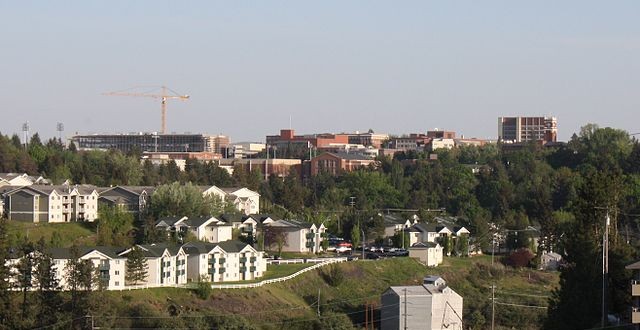 The Washington State University Campus, viewed from the north, in May 2012/Wikipedia photo by Kearby

Washington State University made national news this week for a few otherwise innocuous syllabi in their Critical Culture, Race and Gender Studies department. The professors in question informed students they would risk lower grades or lost points in classes for using terms the teachers considered offensive in class or in assignments.

Before you get righteously angry, 1984-style, read carefully: some of these terms are actually offensive, or at the least, anachronistic, and most people have edited them out of their daily dialogue, if they ever used them in the first place. Some of the forbidden words include ‘tranny’, ‘colored people’, ‘illegals’ and ‘illegal aliens.’

Others, like ‘male’ and ‘female’, gave me pause. I’m absolutely in favor of putting more gender descriptors on the table, and limiting them to only binary ones ignores many people. The Oxford English Dictionary recently added the gender-neutral ‘Mx’ to its lexicon, and I think that’s awesome. We need more words like this. But including them doesn’t mean we should get rid of Mr., Ms and Mrs., or male and female. Why not include everyone?

As a journalist, I would never use most of these descriptors while writing a story, and most professional journalists shy away from using race or gender to describe a person unless it’s pertinent to the story. Even if it is, we’re very careful about how we use it. Extensive acreage in the Associated Press Stylebook (the journalist’s style bible) is devoted to the correct use of adjectives most of us use to denote gender, race, ethnicity and mobility. We’re careful about words because words are our job.

Plus, as anyone who’s ever accidentally hit ‘reply all’ on an office-wide email knows, once something is in writing, it’s really hard to take back.

Words are powerful. They can be edited, deleted, wiped from a hard drive and apologized for, but they are hardly ever forgotten. Look at how differently this story is being portrayed in various news outlets, depending on how the headline is written: “Taxpayer-funded professors ban words ‘female’ and ‘illegal alien’ and make white students ‘defer’,” one says. Another says “WSU instructors under fire for trying to ban words,” while the Washington Post went with “Washington State University class bans ‘offensive’ terms.”

Targeted use of quotation marks, word order and adjectives can change the meaning of a sentence, and guide the reader to whatever conclusion the writer had in mind. Surely those terms weren’t actually offensive — they’re in quotes. White students are being asked to defer? Outrageous. The words aren’t there, but they are, hiding between the lines.

Despite the acknowledged power of words, word order and even punctuation to shape our society, I am against word bans of any kind. Even the offensive kind. I understand why some limitations exist — for example, many papers won’t print certain words, and movies have ratings on them. Just because all words exist doesn’t mean we need to see them all, all the time. But that’s not the same as a ban. And a ban at a university, where students should be challenged and encouraged to debate, discuss and push the boundaries of critical thinking, is potentially horrifying.

Besides the obvious conflict with the First Amendment, banning words and books, especially at schools and universities, is harmful for many reasons. Unfortunately, it’s a growing trend. Authors Greg Lukianoff and Jonathan Haidt discuss this trend in a recent article for The Atlantic.

Two terms are becoming increasingly common at U.S. universities — trigger warnings and microagression. Microagressions are small actions or word choices that seem to have no malicious intent but are still thought of as a kind of violence. An example of a microagression, they say, is asking an Asian-American student ‘Hey, where were you born?’ However benignly meant, this question is usually offensive and implies the person is not a ‘real’ American.

Lukianoff and Haidt give another example of a microagression in action: ‘In April, at Brandeis University, the Asian American student association sought to raise awareness of microaggressions against Asians through an installation on the steps of an academic hall. The installation gave examples of microaggressions such as “Aren’t you supposed to be good at math?” and “I’m colorblind! I don’t see race.” But a backlash arose among other Asian American students, who felt that the display itself was a microaggression. The association removed the installation, and its president wrote an email to the entire student body apologizing to anyone who was “triggered or hurt by the content of the microaggressions.”’

Trigger warnings are are alerts that professors are expected to issue if something in a course might cause a strong emotional response — if a book or movie contains graphic violence or a rape scene, for example. These terms effectively function as content filters, argue Lukianoff and Haidt, because students who feel the content might make them uncomfortable can simply avoid the book, movie display or discussion. They can also sue, complain to the school board, or demand that the offending content be removed.

Why is this harmful? In some ways, it isn’t. Like many things, it’s a well-intentioned move that has gotten out of hand. People who have domestic violence and rape in their past probably deserve a warning before they read books and see movies portraying graphic content. Growing up as a white person, I can’t fully grasp what it’s like to deal with racism as a minority, and I can’t say I want more racial violence or approve of ignorant comments and displays. I don’t. But is creating an insulated world where students can filter every discussion the right answer? I don’t think so.

For one thing, it doesn’t prepare them for the real world. In the job market, and when dealing with family, friends and acquaintances, there will always be situations, people and conversations that make us uncomfortable. This is not in our grasp to control — what we can control is our response and how much we let these situations affect us.

Universities are also a place to stretch the mind — to question our beliefs and challenge our long-held assumptions. Part of this process is allowing ourselves to associate with and debate with people we may not agree with. That doesn’t mean we need to allow ourselves to be treated poorly. Debate and discussion, at least the productive kind, are about the issues. They aren’t personal. Salman Rushdie said it better than I can.

“At Cambridge University I was taught a laudable method of argument: you never personalise, but you have absolutely no respect for people’s opinions. You are never rude to the person, but you can be savagely rude about what the person thinks. That seems to me a crucial distinction: people must be protected from discrimination by virtue of their race, but you cannot ring-fence their ideas. The moment you say that any idea system is sacred, whether it’s a religious belief system or a secular ideology, the moment you declare a set of ideas to be immune from criticism, satire, derision, or contempt, freedom of thought becomes impossible.”

Creating a climate at our universities where students can walk away from any content that makes them uncomfortable seems helpful and empowering, but it isn’t. Students are going to grow up and become adults, and they are going to encounter, if they haven’t already, many things that make them uncomfortable. They need to be able to say no and set boundaries. But they also need to learn to engage with people who have different ideas and worldviews than they do. This is what makes democracy great, and what makes America a wonderful place to live – the freedom to disagree. At WSU, I understand the intention of these professors — they likely want to encourage students to see the power of naming and words — to see how unintentionally we put others into boxes with our speech. Let’s keep doing that, and have that discussion. But lose the ban.

Previous Coffee Talk Saturday: Transparency In Religious Organizations
Next Pope calls on every European parish to host one refugee family