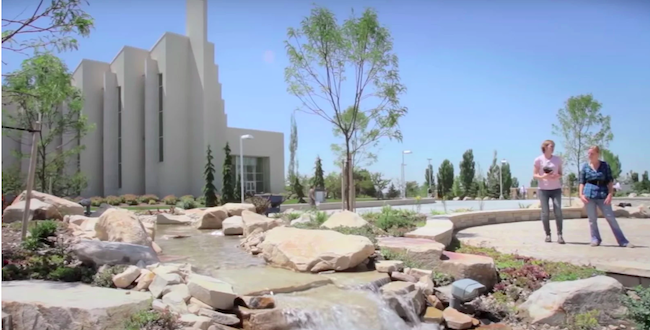 The BYU-Idaho campus in Rexburg, Idaho. Video screengrab via BeSmartCES

Student journalists at an Idaho college owned by Church of Jesus Christ of Latter-day Saints allegedly felt pressured not to publish stories about an ongoing controversy regarding their school’s refusal to accept Medicaid, according to a leaked audio recording of a student newspaper editorial meeting.

Brigham Young University-Idaho is facing criticism for its decision not to accept Medicaid, a controversial move announced just days after expanded Medicaid enrollment had begun in the state.

Idaho passed Medicaid expansion in 2018 allowing families and individuals who fall within 100% to 138% of the federal poverty level to receive Medicaid. The law is set to go into effect Jan. 1, 2020.

Two days before BYU-Idaho formally announced the change on Nov. 15, the school’s student newspaper, the Scroll, published an article highlighting frustration among students whose requests to use Medicaid as an alternative to the student health plan were rejected by the school. Students are required to have insurance or use the student health plan in order to enroll in classes.

In-depth articles on the controversy at the Scroll then abruptly stopped, with coverage mostly limited to the school’s official statements on the matter as BYU-Idaho was beset with backlash over the decision.

“Beginning Winter Semester of 2020, BYU-Idaho will not accept Medicaid as an insurance-waiver option,” the school said in a later statement published by the Scroll on Nov. 20. “Due to the healthcare needs of the tens of thousands of students enrolled annually on the campus of BYU-Idaho, it would be impractical for the local medical community and infrastructure to support them with only Medicaid coverage.”

According to an audio clip acquired by Religion News Service — and first reported by the Post Register — of an editorial meeting at the Scroll from Thursday, student journalists have written additional stories on the topic. Those stories remain unpublished.

In the recording, a Scroll editor is heard discussing a conversation that was conducted with “Brother Thompson,” who is believed to be John Thompson, student media general manager at BYU-Idaho. (Thompson deferred to the university communications office when contacted by RNS.)

“So I went to Brother Thompson and was like, look, what’s the deal?” the editor can be heard saying in the recording. “And basically the deal is … There are people that would be very happy to cut Scroll funding in the Kimball (administration) building. So we keep getting told to not poke the bear.”

The editor then says they allegedly asked Thompson whether students could publish their stories elsewhere.

“Because we are staff members and we are on the school’s payroll, the copyright belongs to BYU-Idaho, so they’re probably not ever going to be published,” the editor can be heard saying. “So that really sucks.”

In another recording from the same meeting, students can be heard venting frustrations about the news, which included allegedly being told they cannot write columns or opinion pieces about the Medicaid issue.

“I hope you’re all pissed, because we should be,” the editor says. “Basically our free speech just got flushed down the toilet because we work at a private university.”

Scroll leadership did not immediately respond to requests to confirm the audio, but multiple sources familiar with the Scroll, but who did not wish to be identified, confirmed the main speaker in the recording is an editor.

The BYU-Idaho communications office did not respond to requests for comment or confirm the allegations listed in the recording. RNS also reached out to the Church of Jesus Christ of Latter-day Saints for comment, but a spokesperson deferred to the university.

BYU-Idaho is a private institution, a distinction that grants it wider control over student publications compared to public universities.

The school is also affiliated with the Church of Jesus Christ of Latter-day Saints, whose leaders have lauded the efforts of journalists in the past. According to the Deseret News, Elder D. Todd Christofferson — a member of the Quorum of the Twelve Apostles — praised journalists in 2017 while addressing the Inter American Press Association’s 73rd general assembly.

Speaking in Spanish, he described journalists as “ambassadors of freedom and human rights” who, at their best, “give voice to the voiceless” and “shine light on the difficulties of our world and to bestow dignity on the human experience.”

“Safety does not come from stifling speech, but from giving it a chance to breathe,” he said. “Not everything that comes from our pens or our mouths will be useful, but when freedom is discouraged, nothing good will come out of them either.”

Kala Grant, an incoming sophomore transfer student at the school and whose husband is currently enrolled, said she and others impacted by the decision did not find statements from school officials convincing. Grant has a pre-existing condition and currently has a surgery scheduled for December 31. She initially planned to enroll in Medicaid in the new year after she leaves her current seasonal job and begins classes at the school.

With the school’s refusal to accept Medicaid, however, she said her family now faces the “heartbreaking decision” of whether to leave the school.

“No matter which way we do the math, the numbers just don’t work,” said Grant, who is also a member of the Church of Jesus Christ of Latter-day Saints.

She described the school’s recent statement as “disappointing” and a “brush off.” She pointed to local reporting that cited area hospitals and medical professionals voicing skepticism about the school’s reasoning for denying Medicaid.

She said the school’s posture regarding the controversy — including reports of stifling student journalists — appeared to be inconsistent with her religion’s 13th article of faith, which focuses on honesty.

“That statement that they gave kind of ignores everything they profess to stand for as a school,” she said.

The students’ frustration in the leaked audio mirrors that of student reporters at other religious colleges — particularly those that claim a Christian identity.

In 2018, a student at Liberty University told RNS and other outlets that school president Jerry Falwell Jr. personally instructed her not to cover a nearby demonstration that featured speakers critical of the school’s leadership, an act the student described as censorship.

Later that same year, a group of Christian college students released a survey documenting what they claimed were numerous incidents of censorship at religious schools across the country.

Previous Welcoming, but not affirming
Next Ask A Muslim: Can girls be married off?

But through a partnership with Habitat for Humanity, the Yaitskaya’s will be moving into their new home next week — a blessing the family is grateful for during this Thanksgiving season.