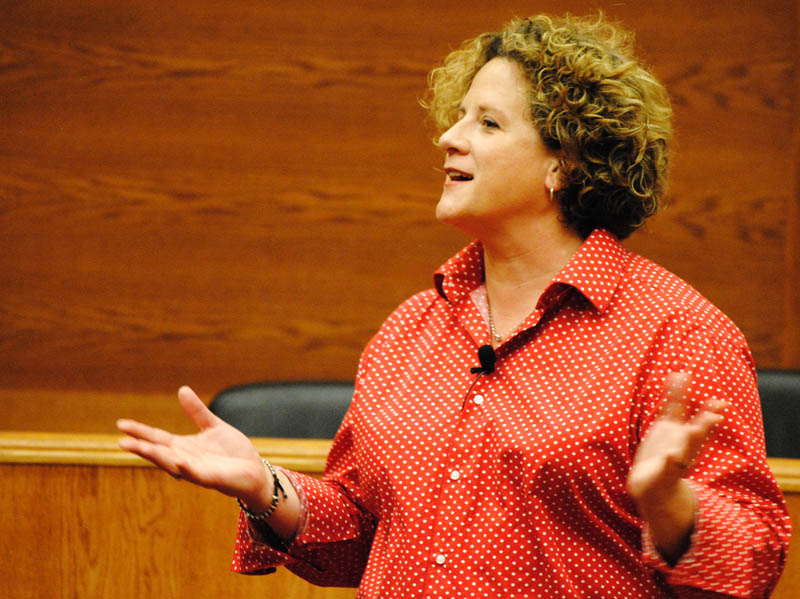 Strong speaks to Zags about gay marriage, the Catholic Church

What do you do when your spouse of 10 years — the person you’ve spent a decade sharing spiritual, intimate and intellectual moments with — is lying unconsciously on her deathbed without warning?

If you’re Catholic, you make sure her body is anointed with oil. You kiss her goodbye, even if you have to force the doctors to remove the intubation tube, and you slide the wedding ring gently off her finger and whisper a promise to take care of it forever.

That’s what Charlene Strong did on Dec. 14, 2006 after torrential rains flooded their Seattle home, leaving her partner Kate Fleming trapped in her basement studio. But not until after hospital administrators called a relative of Fleming’s to get permission.

“They were willing to take the word of someone on the phone, 300 miles away.” Strong said. “Who knew her allergies? I did. Her knew what her wishes were? I did.”

With the family’s blessings, Strong was able to see her partner one last time. But the battle continued, she said, when the funeral director refused to allow her to make final arrangements.

Strong decided then that she would do whatever she could to make sure same-sex couples would have equal rights in Washington State.

Around 200 students, faculty and community members wiped tears from their eyes as Strong shared her story Monday night at the Gonzaga University School of Law.

She’s spoken at 40 universities in less than two years, reliving the flood and her unsuccessful attempts to rescue Fleming. She uses the pain to discuss inequality and social justice, which she also addresses in her documentary, “For My Wife.”

Jaime Hollis, program coordinator for the LGBT Resource Center at Gonzaga, said as she introduced Strong, that Strong’s visit was a way to take Bishop Blase Cupich up on his invitation for an honest discussion on the issue of gay marriage and Referendum 74.

Cupich, of the Catholic Diocese of Spokane, has written several letters to parishioners in recent months explaining why Catholics should oppose Referendum 74, citing family structure, procreation, language and that the legislation, “would not give same-sex couples any new legal rights which they do not already have access to through the state’s registered domestic partnership provision.”

His August letter was distributed at the lecture.

Strong was influential in getting the state’s domestic partnership bill passed in 2007 but said same-sex couples still aren’t treated fairly.

For example, HIPAA (Health Insurance Portability and Accountability Act) often trumps domestic partnership rights, she said. Mostly, she said, because of discrimination or lack of education.

She cited a lesbian couple from Spokane who are registered partners, but were refused equal treatment when one partner was rushed into life-saving surgery after giving birth. The healthy partner, at home with their new child, wasn't told about the surgery.

She said if Referendum 74 passes it would put added pressure on the government to look at same-sex marriage as a federal issue, rather than a state-by-state one.

“We’re trying to get people to see that states don’t fall into the ocean because they allow equality,” she said. “Even if we’re afforded the ability to marry here in Washington State, in 32 other states we’re still left vulnerable, where our marriage still means absolutely nothing.”

Under The Defense of Marriage Act, signed by Bill Clinton in 1996, no state is required to recognize a same-sex marriage from another state.

President Obama has said he will repeal the Act.

“It’s 2012 and frankly it’s alarming we continue to even have this discussion,” she said, adding that she thinks marriage equality for all 50 states is at least a decade or more away.

Until then Strong continues to fight for equality in the Evergreen State and continues to stand up for the Catholic Church, even though she said teachings from church leaders have been painful at times.

Strong was closeted until she was 33 years old and said she felt more connected to her faith when she was finally honest about her sexuality and who she was. She and Fleming attended a Catholic parish in Seattle together and were welcomed by those in the pews.

“The church kept me from going crazy after my wife died,” Strong said. “They were there to help bury her with tremendous compassion.”

Also handed out at Strong’s lecture was “Always Our Children: A Pastoral Message to Parents of Homosexual Children and Suggestions for Pastoral Ministers,” a statement from the Bishop’s Committee on Marriage and Family.

The document states that all humans are created in God’s image and should be treated with dignity and respect.

The Catholic Church’s call to social justice is why Strong loves her faith.

“When you leave the church you can’t fix the church,” she said. “You can’t be part of the discussion.”

Previous Call for photos: Faith-based Halloween costumes
Next Step out of the ‘masquerade’